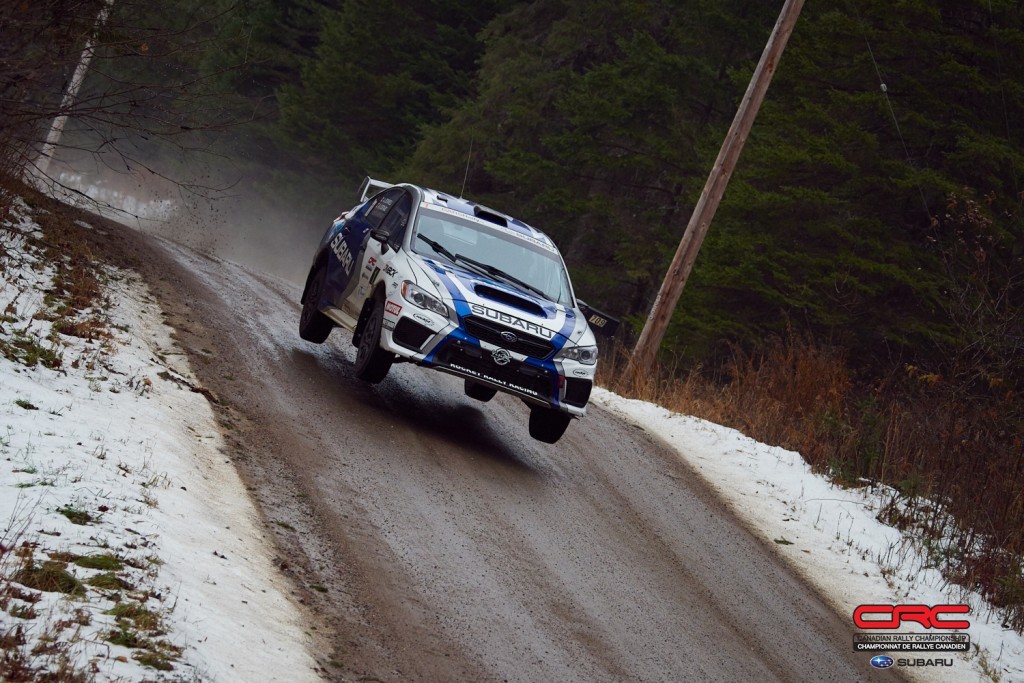 Antoine L’Estage and Alan Ockwell dominated the 2017 Lincoln Electric Rally of the Tall Pines, racing to first place through difficult wet and freezing conditions through the entire event. The Subaru Rally Team Canada crew extended their respective leads in the driver and co-driver championship standings with a near perfect performance at one of Canada’s most demanding stage rallies.

L’Estage and Ockwell attacked on the very first stage, opening up a 50 second lead by the first service break. From there, the team held a fast pace and managed a lead that grew to nearly three minutes at the finish of the rally. 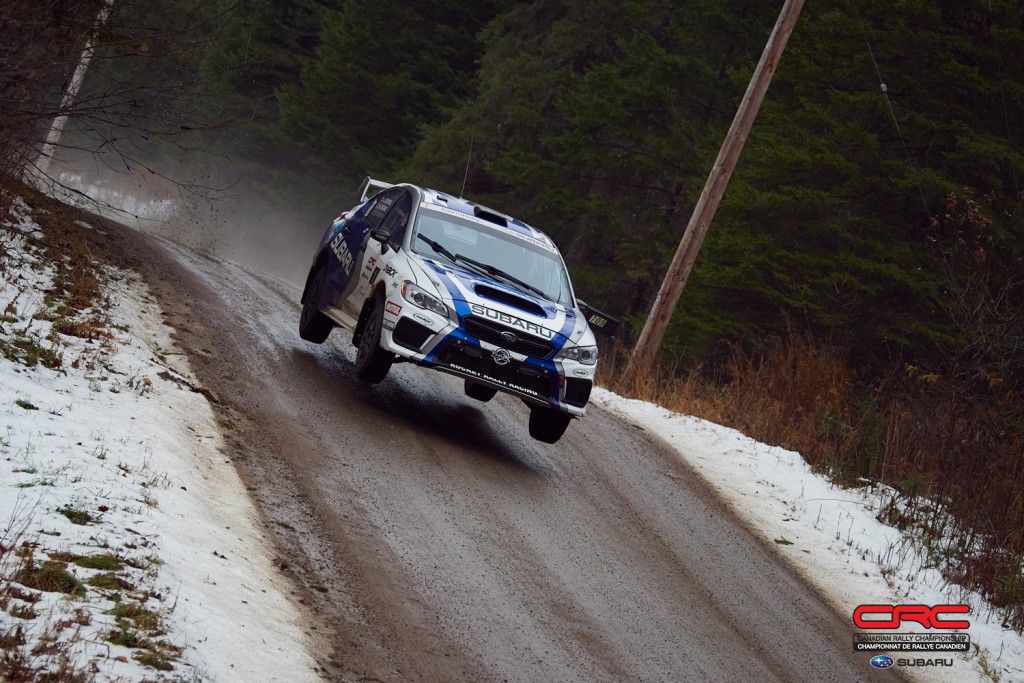 “We had a trouble-free event today,” said L’Estage. “This event has sometimes been really tough on me but the last few years we have won. I’m most excited now to secure my tenth Canadian Rally Championship title. I never would have imagined doing that when I started, so it’s really cool now to be so close.”

L’Estage only needs to start the final round of the championship, the Big White Winter Rally, in order to secure the 2017 driver’s championship.

A Tall Pines newcomer surprised fans and competitors alike. Conner Martell and Greg Dorman were quick from the start, and proved his pace was sustainable, driving to a second place finish in his second ever stage rally. Martell is no stranger to motorsport, narrowly missing out on winning the GRC Lites class championship in the Global Rally Cross series in the USA this season while driving for DirtFish Rally School.

Martell had Greg Dorman sit in as co-driver, and benefitted from advice and support from John Buffum. The team had to manage a failing clutch for most of the rally, and arrived at the finish two minutes, 45.6 seconds back from L’Estage.

“It’s kind of unreal to be honest, I am glad we got the car to the finish we got two flats on the last stage. I knew it wasn’t going to be handed to us that easily. Those flats turned it into a real rally. This is the most fun I’ve had in a car.

“Obviously it’s cold right now, but I’m really glad we were on the podium, and hope I can get out to a stage rally again soon.” 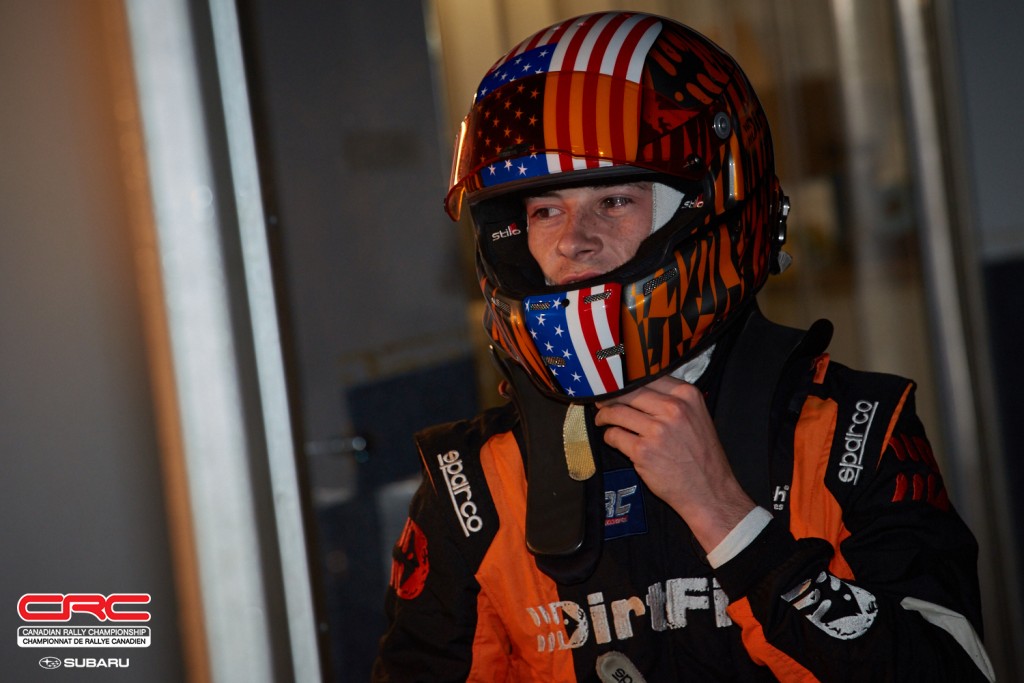 A third place finish was enough to cinch the Production 4WD class championship title for Leo Urlichich. Running most of the CRC championship, Leo opened the season by winning the Rallye Perce Neige, in Maniwaki, Quebec, to take the overall lead in the championship. Though he was unable to maintain that position, the result at Tall Pines with co-driver Alex Kihurani today put him into a comfortable second place in the overall standings with one event remaining in the calendar.

“This is the end of our season,” said Leo. “We set out to win the Production 4WD class title, and the team – all the guys at Can Jam Motosports, Race Lab, my co-driver Alex – worked really hard to make this dream come true.

“I don’t know exactly what our plan will be for next season, but we will do select CRC events.” 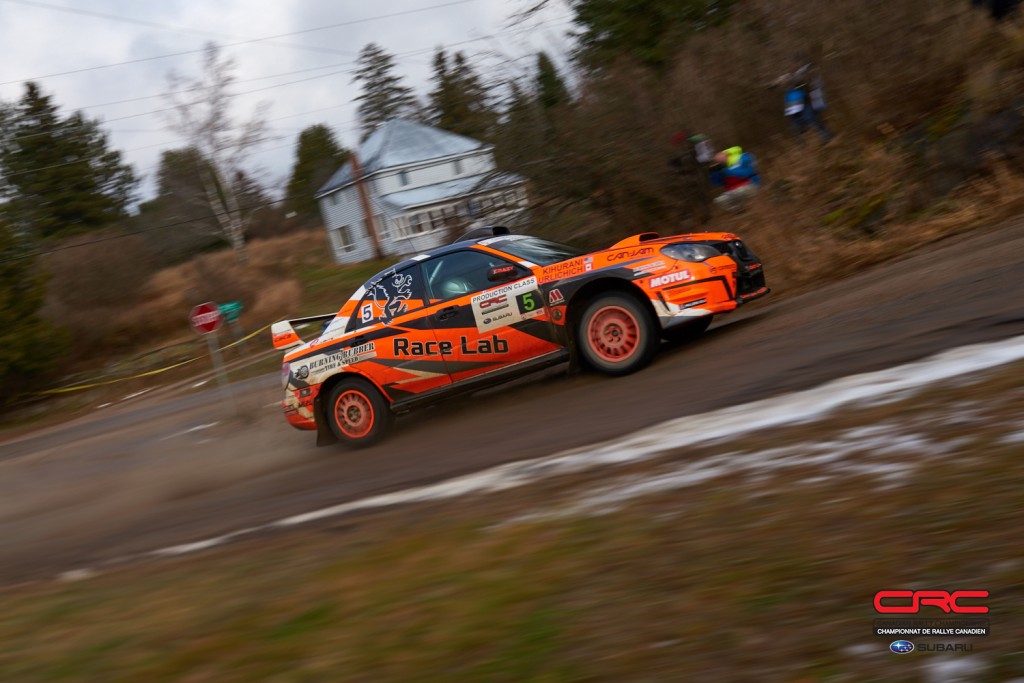 Sean Burke and Timothy Bauer were the lone 2WD team to arrive at the finish of the rally. The national championship was secured by Dave Wallingford and Leanne Junnila at the Pacific Forest Rally last month, eliminating any need for the top teams to contest the Rally of the Tall Pines, and opening up opportunities for others to fight for a class win at a single event.

Weather and road conditions played the ultimate challenge out to competitors through the day. The teams started off the day on roads that were a mix of wet sand and gravel, before heading into the snowy and icy forest stages. Temperatures hovered just above freezing during the day, dropping to sub-zero temperatures once the sun set. That shift caused wet sections of the road to begin to freeze, complicating tire choice.

“There’s no right tire for the conditions today,” said Simon Vincent, who had finished on the podium in the three past editions of the Rally of the Tall Pines. “Every choice is a compromise, and a bad compromise.”

In the final loop of stages, many teams suffered flat tires, losing time either by stopping to change the tire, of by slowing down in an effort to finish the stage on the flat.

Simon Vincent came into the event having finished on the podium at the last three editions of the Rally of the Tall Pines. He and co-driver Hubert Gaudreau were unable to hold pace with the cars ahead, finishing well back in fourth overall. 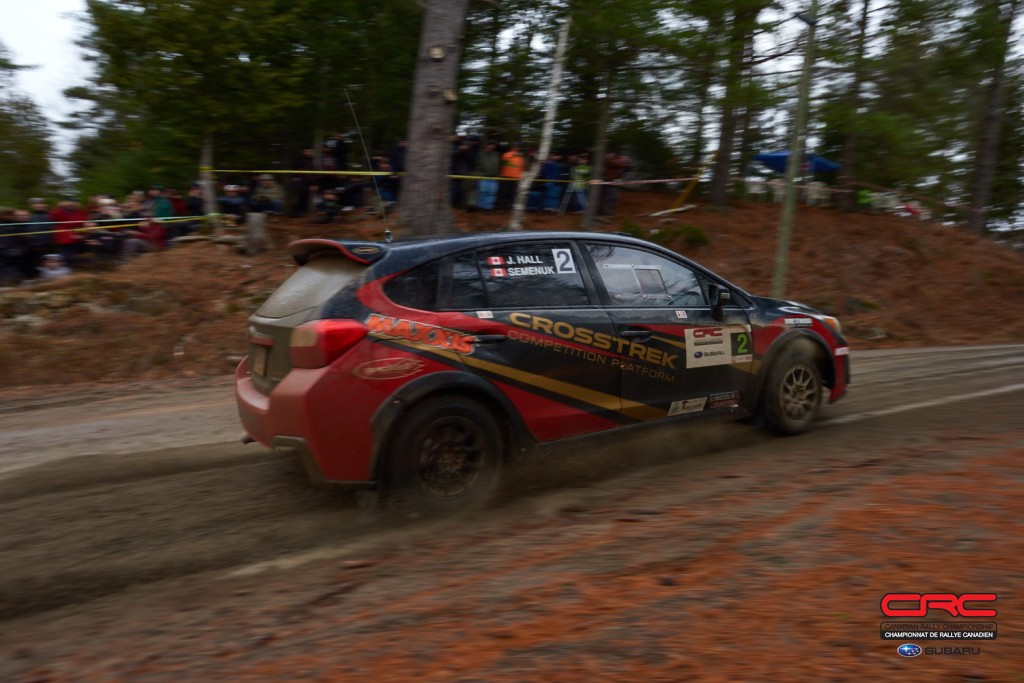 Brandon Semenuk and John Hall had been in the hunt for championship points, however, a mistake before mid-day left the team stranded on top of an earth bank, unable to get free. They watched the minutes tick by until they finally were able to get help back onto the road. By then the damage was done, and the team finished more than 30 minutes back from the leaders. Though John Hall has a mathematical chance at winning the co-driver’s title, that chance is slim, and will depend as much on favourable fortunes for the team as it will difficulties for L’Estage and Ockwell. 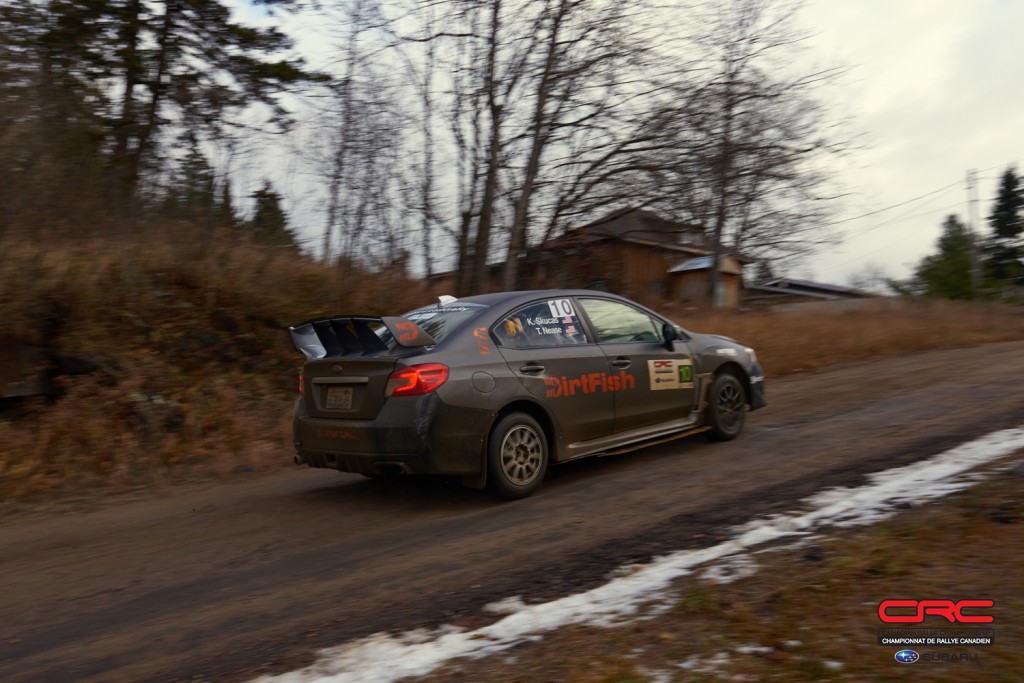 Travis Nease and Krista Skucas had a decent start to their first event at Tall Pines, but got a puncture and ran into difficulties while changing the tire at the side of the road, losing time and positions to put them out of the hunt. However, the pair were able to continue, and finished their first attempt at the Rally of the Tall Pines.

“This is a hard event,” said Nease. “We started going pretty well, but then had some problems. From there it was just about trying to get to the end. We took the chance to really work on some key techniques, stuff that isn’t maybe as much fun as just going flat out, but is really important.”

“I kind of just want a gravel rally, but then, driving on this stuff just makes you better,” said Nease, of the roads that all day had been a mix of wet or frozen sand, gravel, and mud, with ice and snow covered sections in the deep forest stages. Nease and Skucas have committed to closing out the season by competing at the finale two weeks from now. 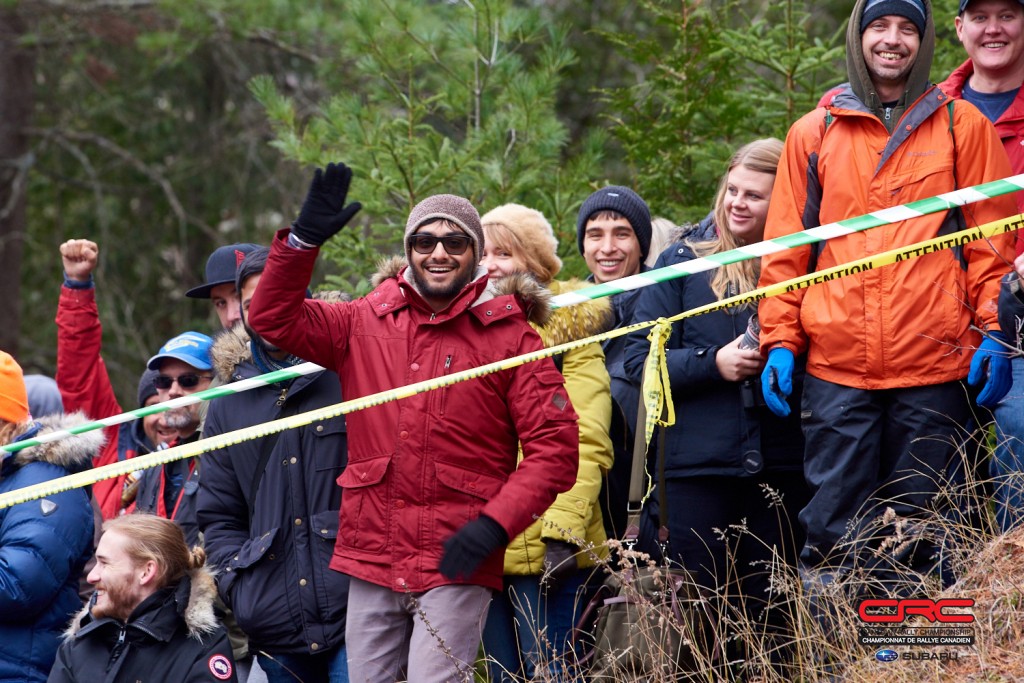 The Canadian Rally Championship is presented by Subaru with support from Motul and DirtFish . The season concludes at the Big White Winter Rally in two weeks time, December 8-10, in Kelowna, B.C. Continue to follow the CRC on Facebook, Instagram and Twitter for highlights from the Rally of the Tall Pines, as well as preview stories and videos for the season finale. 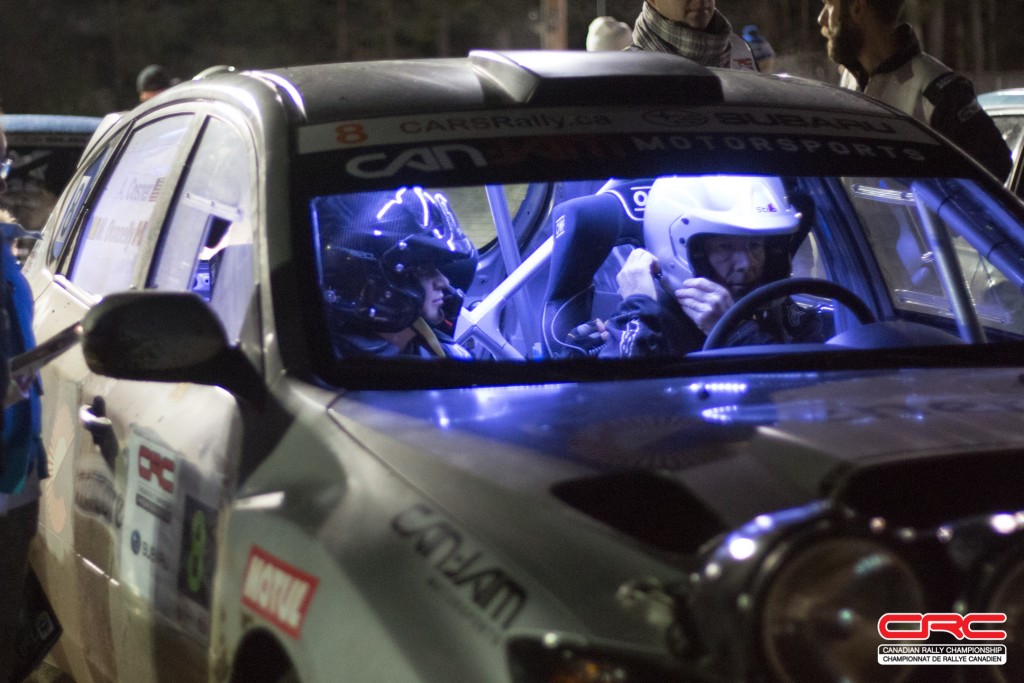 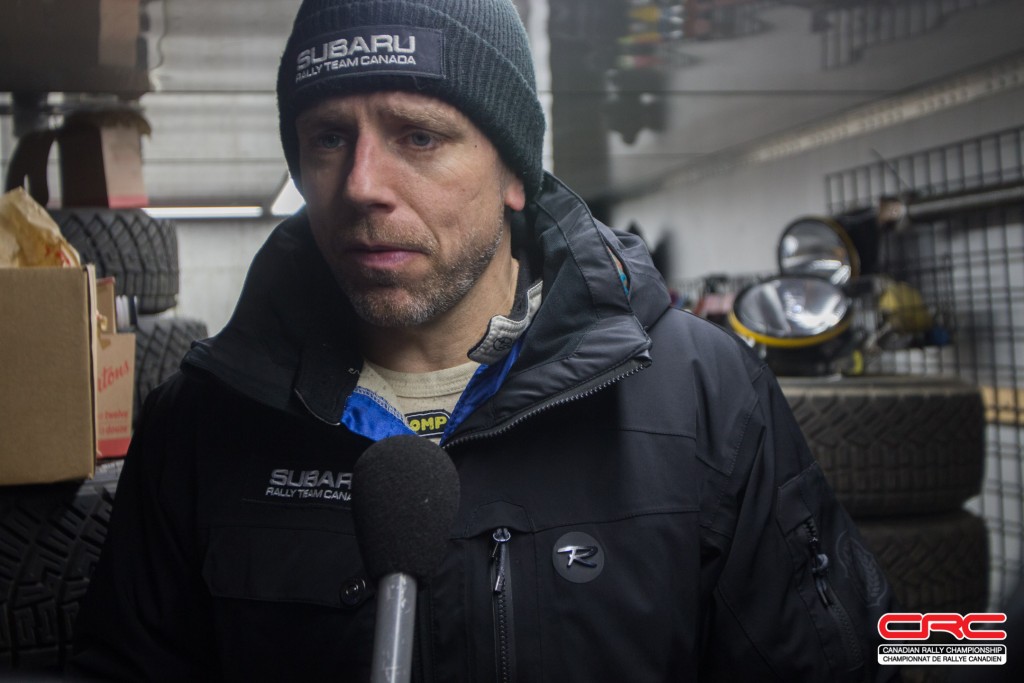 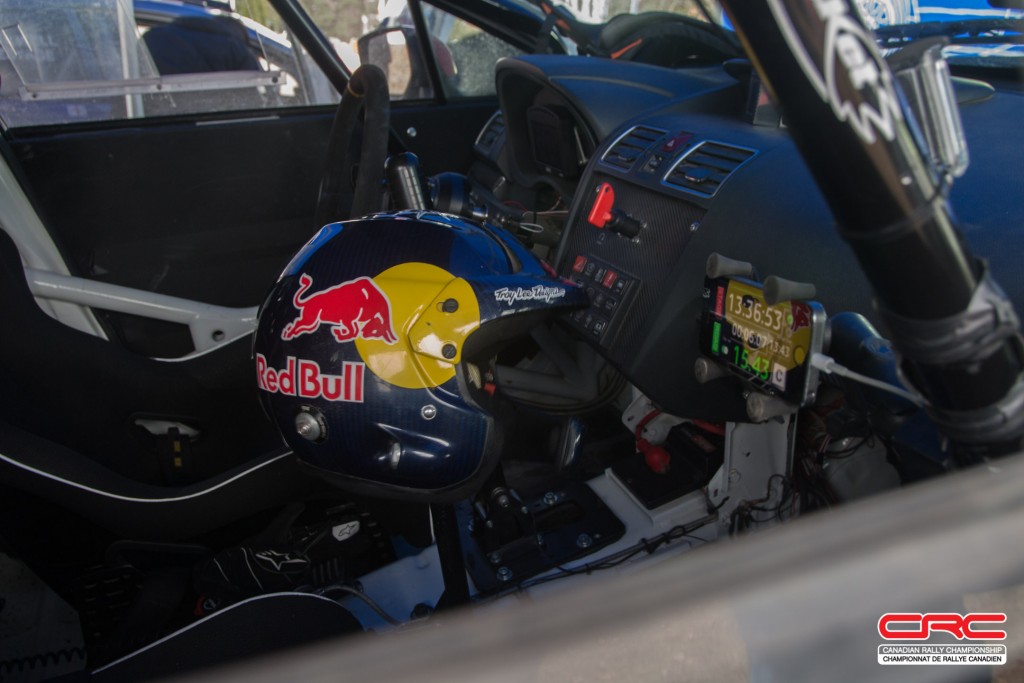 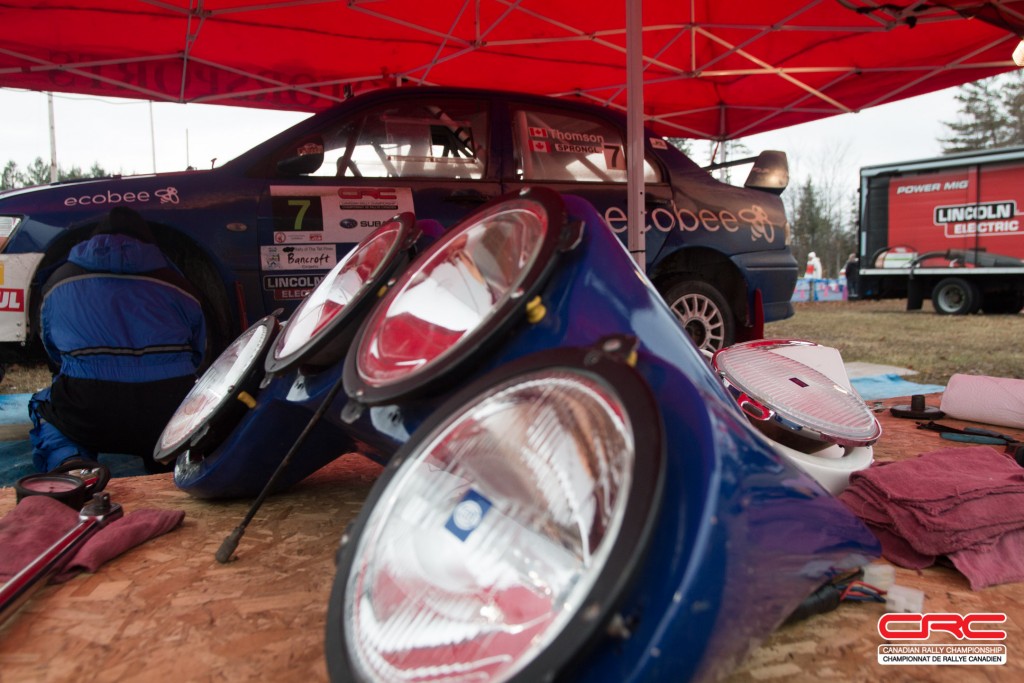 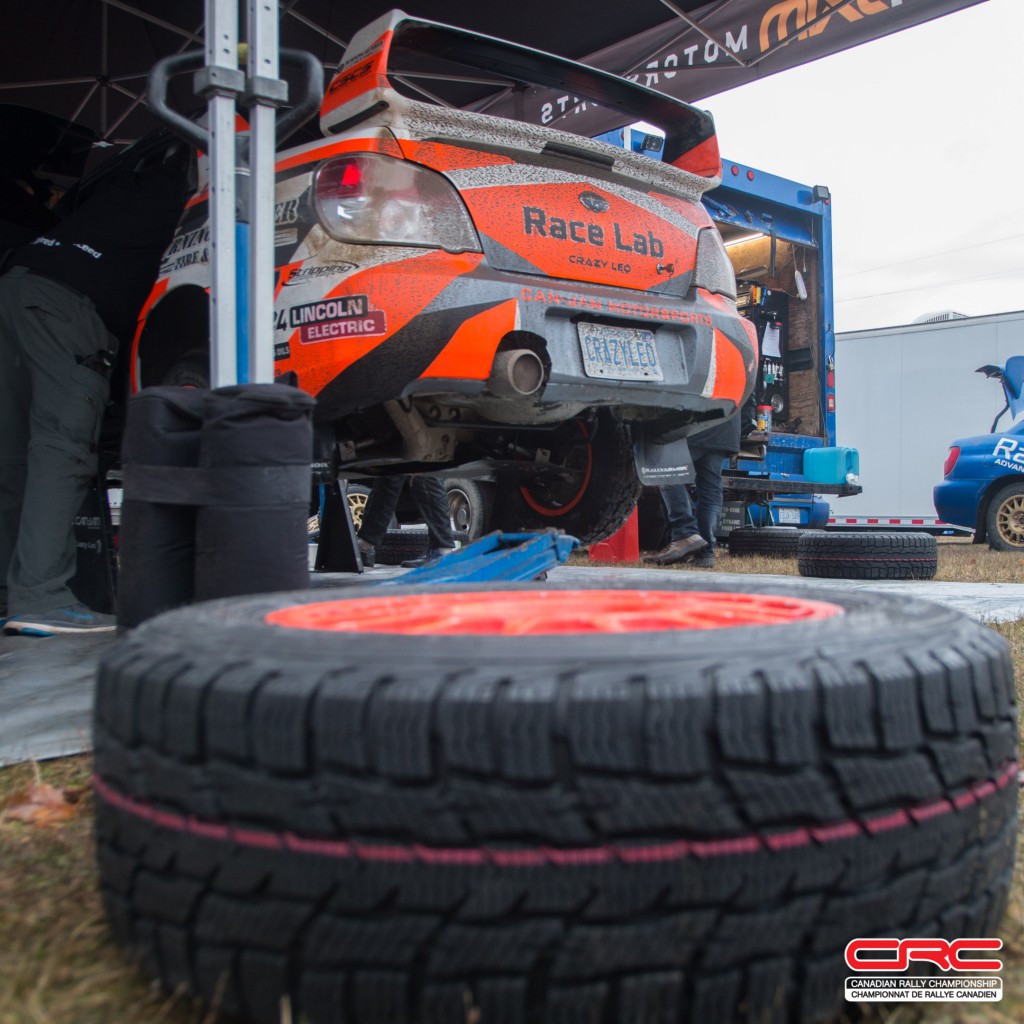 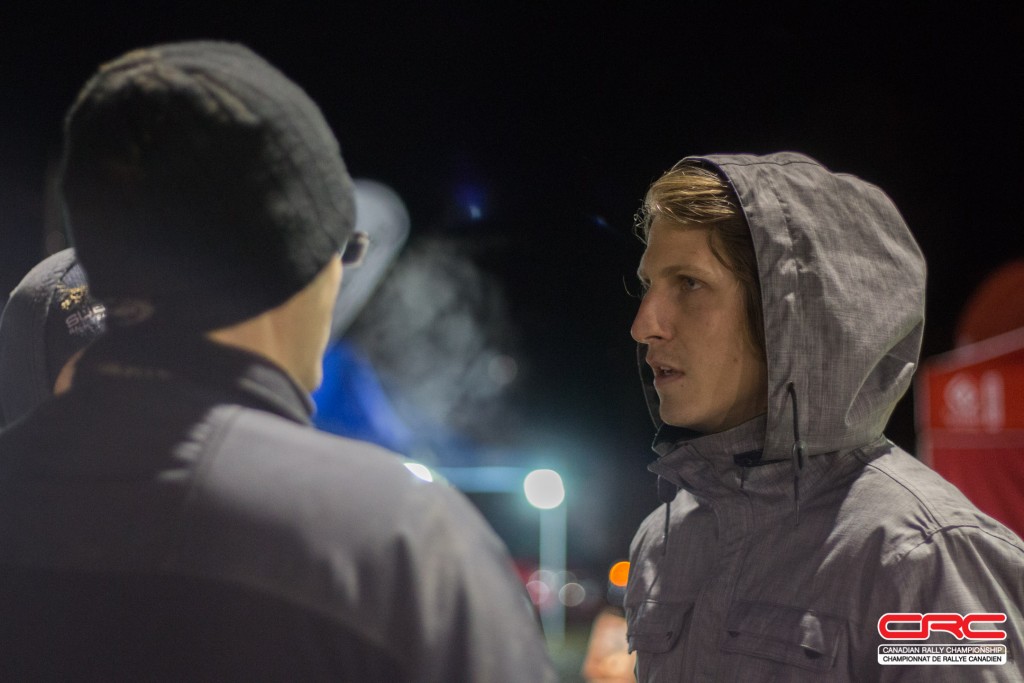