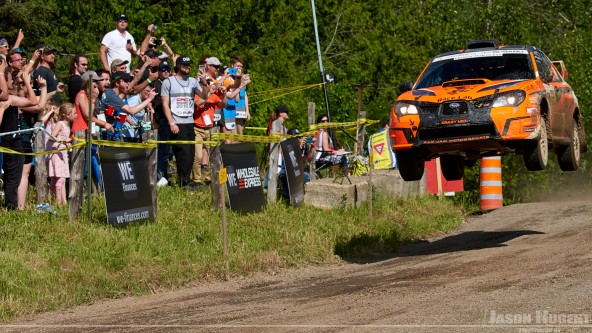 I started rallying because it’s absolutely the best way to drive FAST, and not worry about the cops! I’ve been rallying at a national level since 2007. Before that – in Ontario Rallycross and Ontario and Quebec road rallies.

In 2014 I was competing in the ‘Drive DMACK Fiesta Trophy’ in the World Rally Championship.

In 2015 I started Race Lab – an advanced driving school with teaching methods and curriculum that are unique for Canada and the USA.

In 2017 I won Canadian Rally Championship (class Production 4WD) alongside my co-driver Alex Kihurani, driving a Can-Jam Motorsports prepped Subaru, which we lovingly call “Disaster”. This is a Production 4WD car, and it’s awesome fun to drive the limit while surprising some Open class competitors

In 2019 Mr Kihurani went on to do Junior World Rally Championship as well as Junior European Rally Championship (stay tuned, we’ll be doing some stuff together with his new team), so for my rally events, I partnered up with a Welsh co-driver Max Freeman. He promised to introduce me to some Welsh rally girls.

My dream is to get established as a competitive driver in the World Rally Championship.

Moreau freezes out the competition...

A deep polar airmass brought extreme cold temperatures to Maniwaki, Quebec the night before the...
Dickinson delivers at Big White...