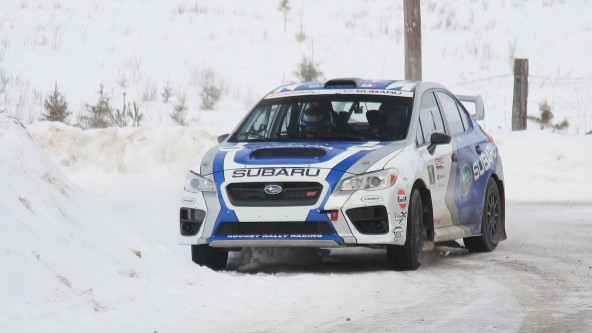 Antoine L’Estage, was born into the world of rally. As a young boy, he and his siblings would watch their father compete as a driver. Now, many years later, Antoine has over a decade of rally experience and is the leader of the L’Estage rally family.

In 2010, Antoine ended Travis Pastrana’s four-year reign of the Rally America championship. He later claimed the North American and the Canadian Rally Championships and secured the Triple Crown for 2010 by winning all three titles in the same year. The Triple Crown has only been won once before in the entire history of rallying in North America (in 2004). In addition, while the coveted Triple Crown has been won before, Antoine’s X Games bronze medal in same year makes his 2010 season even more remarkable!

Another stellar season followed in 2011 as Antoine completed the Rally America series as runner-up behind former British champion David Higgins. Shortly afterwards, he clinched the North American Rally Cup and the Canadian Rally Championship. The 2012 and 2013 rally seasons saw an exact repeat performance of the 2011 success, adding four more overall titles to his resumé. With an incredible 2014 season where he became the first driver in the history of the CRC to win all six events in a same season, setting a new record, Antoine has an impressive total of 48 national victories from both sides of the border.

For the first time in their illustrious careers, Antoine and mentor John Buffum teamed up inside the car as John guest co-drove Antoine to victory at the 2011 Rallye Charlevoix. Rally legend Buffum has been an integral part in Antoine’s career and doing a rally together was a very special moment for both of them.

On January 9, 2015, Antoine L’Estage joigned the Subaru Rally Team Canada (SRTC) and was hired to be behind the wheel of the SRTC 2015 Subaru WRX STI with anticipation of being the quickest car, driver and team to ever compete in the CRC. Subaru Rally Team Canada is managed in cooperation with Rocket Rally Racing (RRR) and Patrick Richard, based out of Squamish, BC, for the 2015 season. The SRTC 2015 Subaru WRX STI was developed from the ground up at the RRR facility using state of the art equipment and materials.

Teams have arrived for Rocky Mountain Rally in beautiful, Invermere, BC. This event is the...
L’Estage and Ockwell cap season...

“We’re really happy to finish the season with victory here,” said L’Estage. “We didn’t have...
L’Estage and Ockwell fastest in...

The Big White Winter Rally opened with two night stages on day one. Antoine L’Estage...
Rally of the Tall Pines...

Teams arrive today in Bancroft, Ontario for the sixth round of the Canadian Rally Championship,...