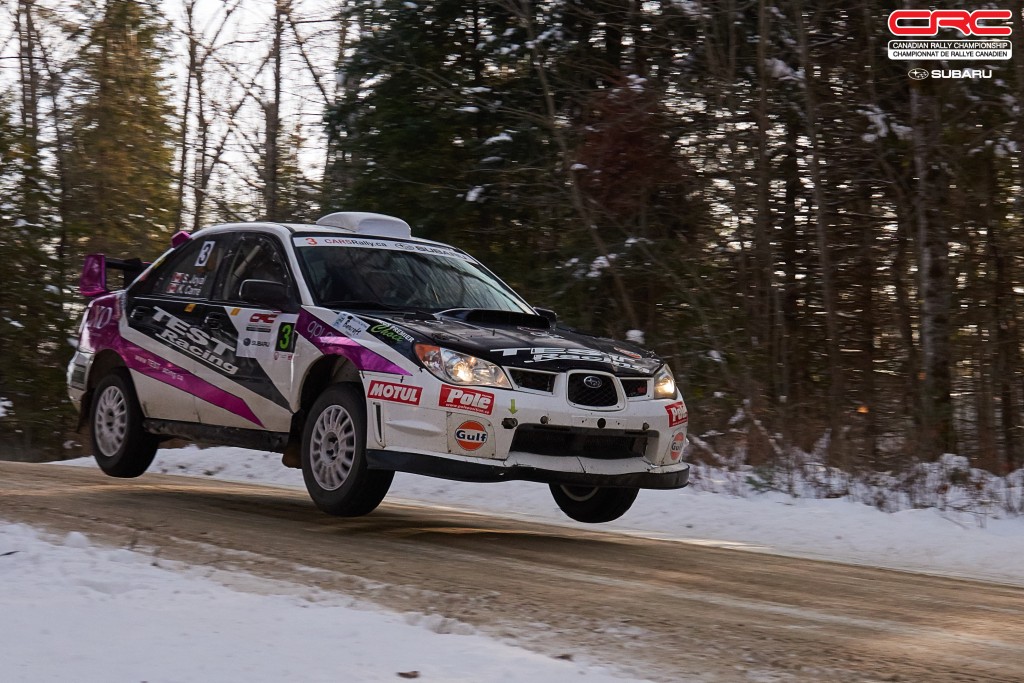 A hard-fought battle in demanding conditions ended with Karel Carré and Samuel Joyal winning the Lincoln Electric Rally of the Tall Pines in their first attempt at the legendary event. On road coated in a mix of ice and water, the pair proved themselves the best team at the event and earned enough points to cement the 2018 Canadian Rally Championship driver and co-driver titles.

“It’s really hard to believe it right now,” said Carré, after the rally. “We just had everything go so well this year, and to now have the championship is just so incredible.” 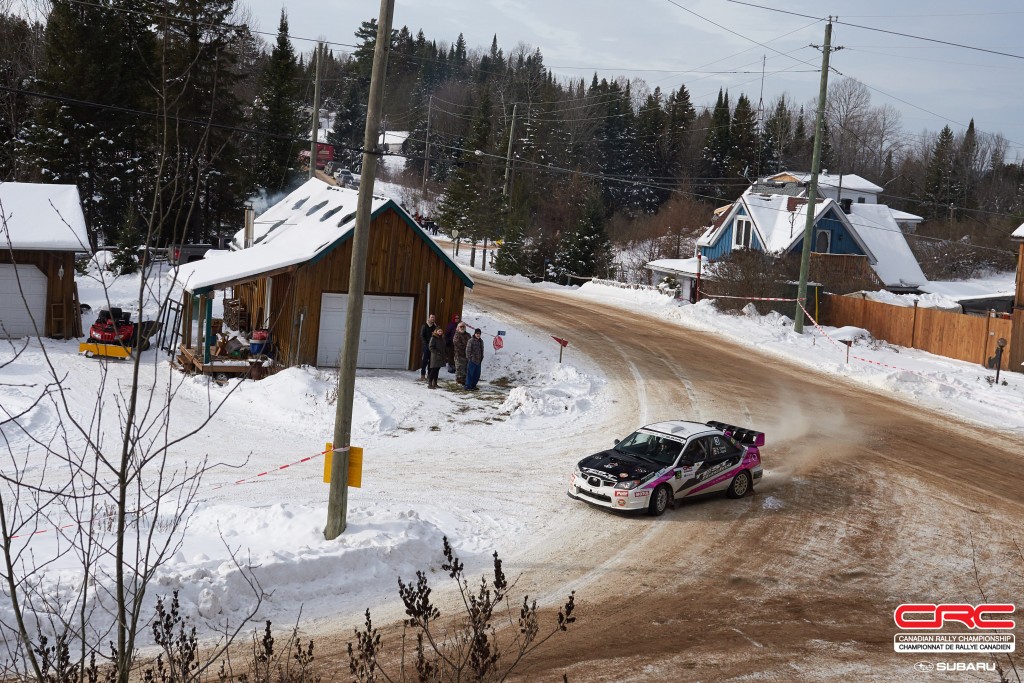 Carré and Joyal’s victory was their second in as many events, and their third overall triumph in the season. Tall Pines was not without its challenges – the team lost a lot of time struggling to find grip on one stage during the mid-day loop. However, they were able to rebound and held a comfortable lead to the finish with relatively little drama.

“Coming into this event when I have never raced here before, it was important to just keep an open mind and have no expectations,” said Carré. “That way, we can just do things the way we want to do them and drive our own event.” 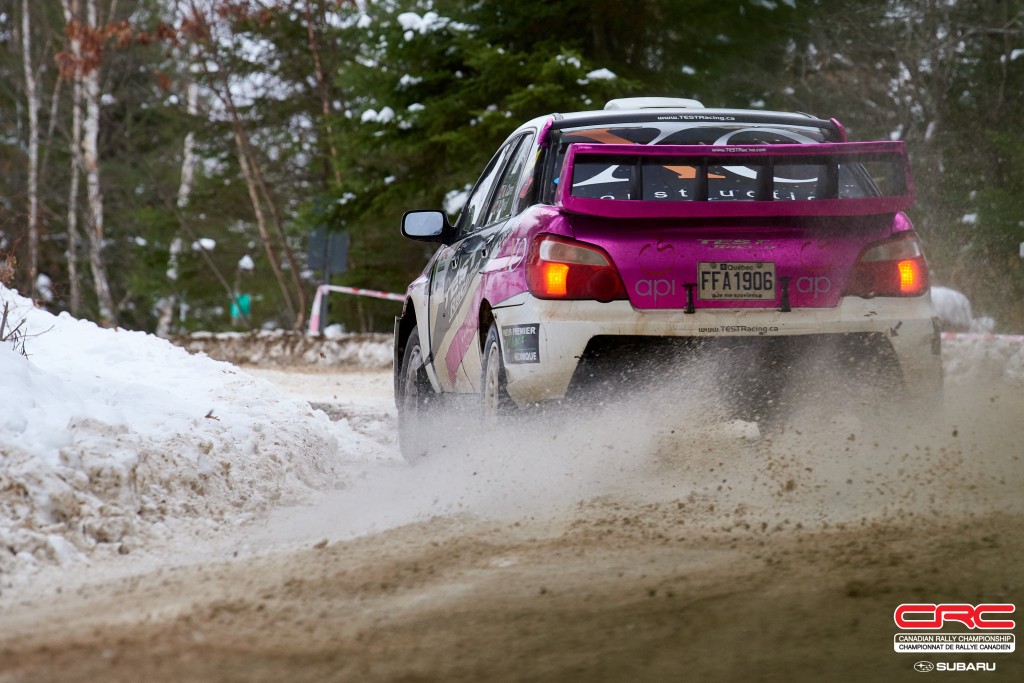 Jean-Sebastien Besner and Yvan Joyal claimed second overall. The team were best positioned to threaten for a lead until a spin on the Golton Super Special cost them approximately 35 seconds, knocking them too far back with too little remaining stage distance to make up the time.

“It’s great to have a podium result here at Tall Pines,” said Besner. “Today was a very difficult day with these conditions so you had to be smart and patient or you would get into big trouble.”

During the week leading up to the rally held in Bancroft, Ontario, the region experienced a deep freeze and substantial snowfall. As the weekend neared, the temperature climbed and the snow began to pack down into a slippery, icy surface. On the day of competition the skies clouded over and it began to rain in the afternoon and evening creating a treacherous surface and slowing competitors dramatically. 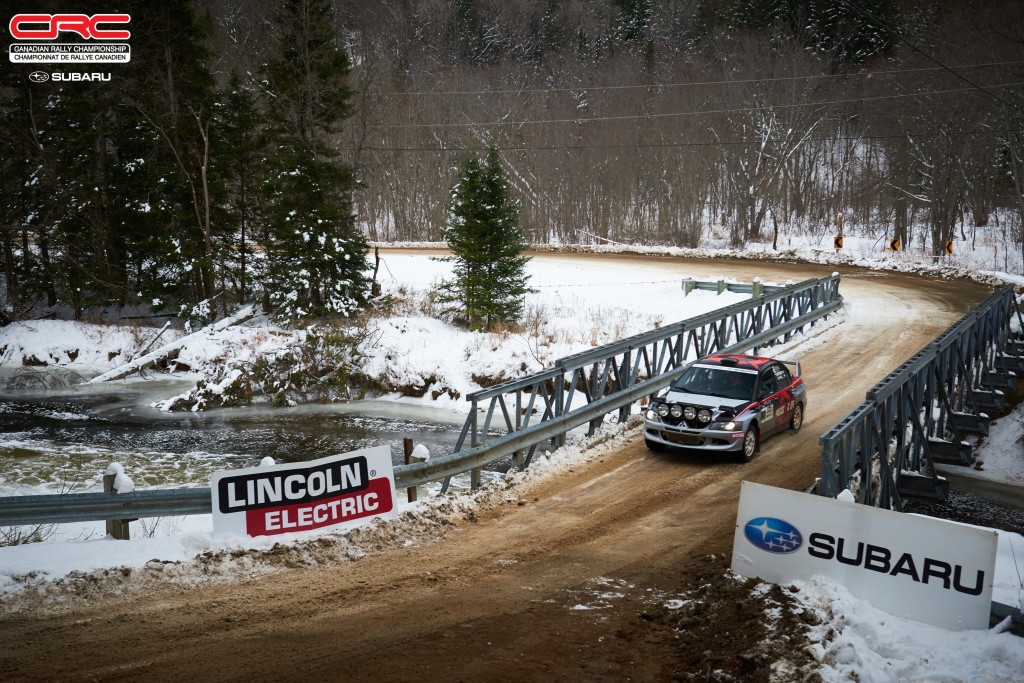 Rounding out the podium after a season of mixed fortunes, Boris Djordjevic and John Hall finished third overall despite picking up three flat tires during the final leg of competition.

“It was so hard to change the tires because the road was so icy,” said Djordjevic. “But we get to the finish, and we are here on the podium. It feels good. Now if we can get the car ready, we’ll be at the Big White Rally to finish the season.

Fourth place went to Marc-Andre Brisebois and Marie-France Desmarais who put in a calm cool drive to earn the spot. Brisebois was awarded the Novice award for his efforts, Tall Pines marking his third stage rally in a car. The professional stunt man had driven side-by-sides in rallies prior to stepping into his TEST Racing Subaru. 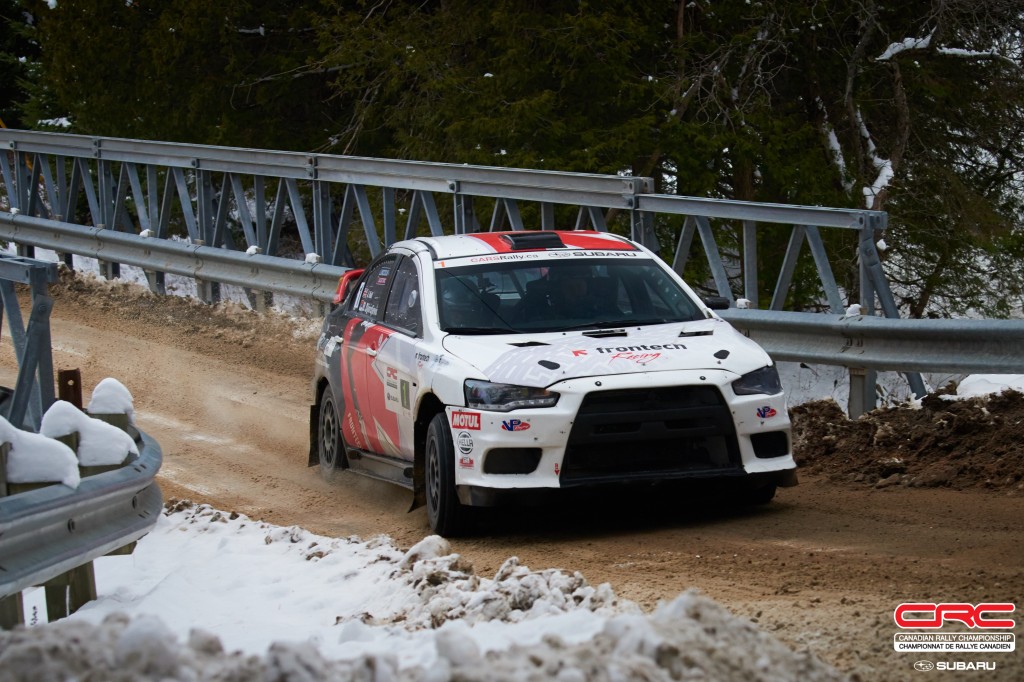 The rally was especially frustrating for Simon Vincent and Hubert Gaudreau. The team entered the event second in the championship standings, but with experience on their side. Vincent has multiple podium finishes at the Lincoln Electric Rally of the Tall Pines and hoped to capitalize on that background. The team was pushing on the long Egan Creek stage hoping to make up ground on event leaders Carré and Joyal, but instead suffered flat tires that forced the team to stop mid-stage to make repairs. The lost time knocked them down the order and while they recovered a few positions, the ended the day in sixth place.

“It’s very tough to no longer have a chance for the championship this year,” said Vincent, who entered every event of the season in his bid for the title. “On the positive side, we had a few scratch times during the rally which is good for us. The car has been really reliable for us and we’ve finished in the top six at the last 28 rallies we’ve started which shows just how consistent we can be.”

“We’re going to take some time to think about the plans for the future. The team has been working hard for the last eight years to work towards this goal, and it may be time to scale back for a little bit.” 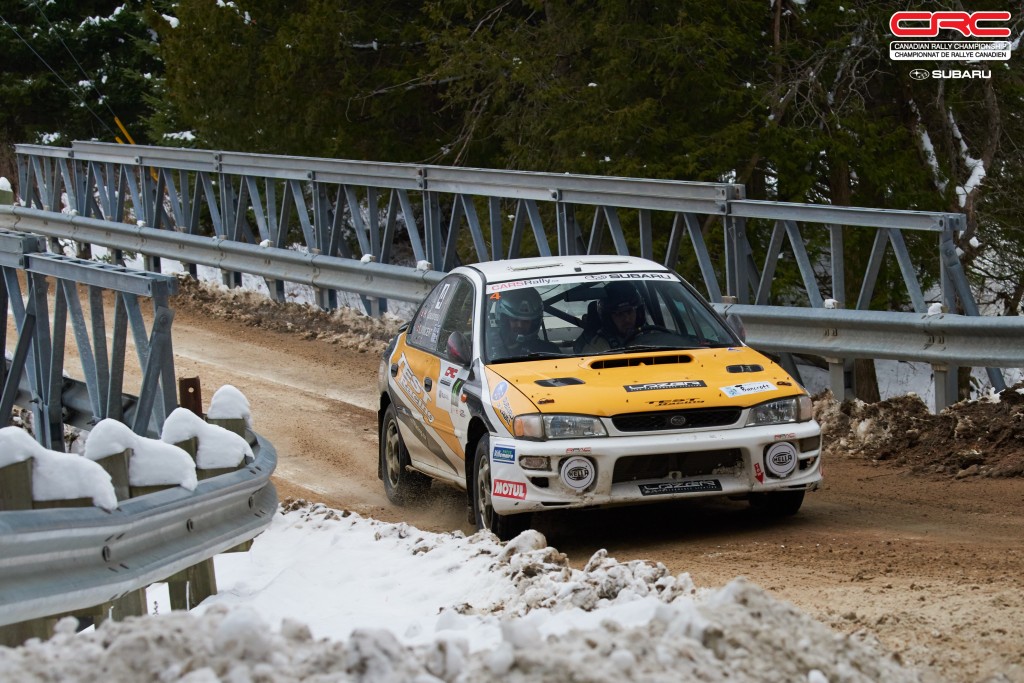 Two-wheel drive saw some new faces emerge in battle. With the 2018 class championship already locked up at the previous round of the championship, the Pacific Forest Rally, the western teams opted not to travel to Ontario, opening the door for eastern teams to put on a show in their hunt for victory.

Philippe Benoit and Ian Guite carved out an early lead, pushing their Mini Cooper hard through the first half of the event. They have shown glimmers of speed in the past but struggled with reliability. This year appeared to be going well until the team suffered a flat tire on the Egan stage. They tried to drive it out to the stage finish until getting stuck in a water hole. 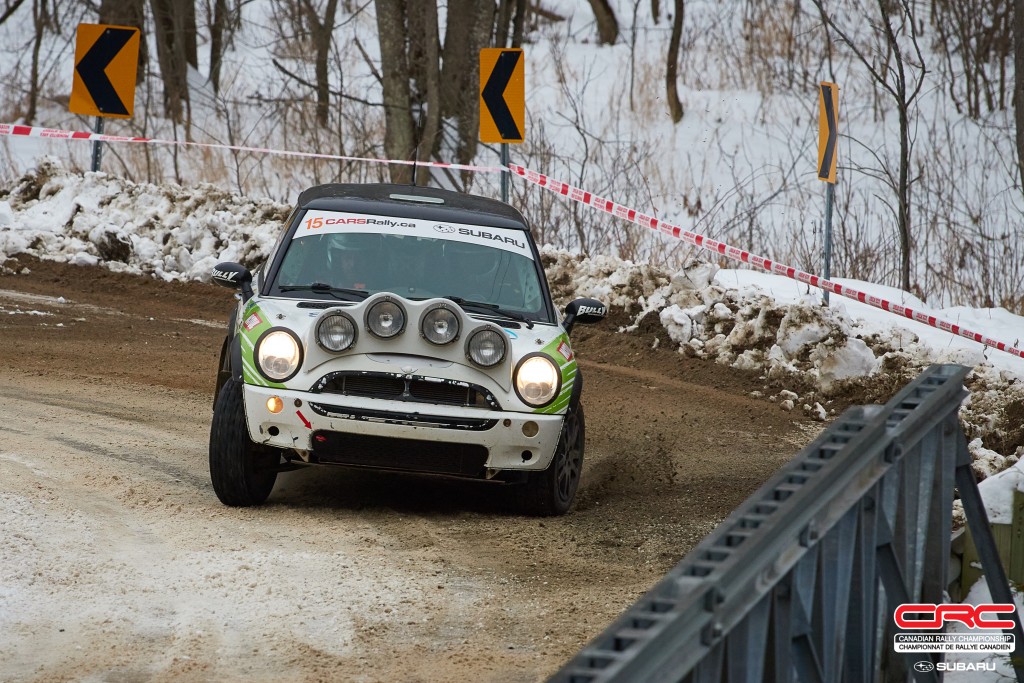 Mathieu Leblanc and Eric Dubé of New Richmond, Quebec, were able to overtake Benoit and Guite to take over the lead. Leblanc and Dubé have proven very fast in difficult conditions, winning their class at the icy season opener, Rallye Perce Neige.

“This was a very hard rally for us,” said Dubé. “We were constantly working to try to find the right tires and set-up for these conditions, but never seemed to get it quite right. We are happy to win after such a difficult day of racing.” 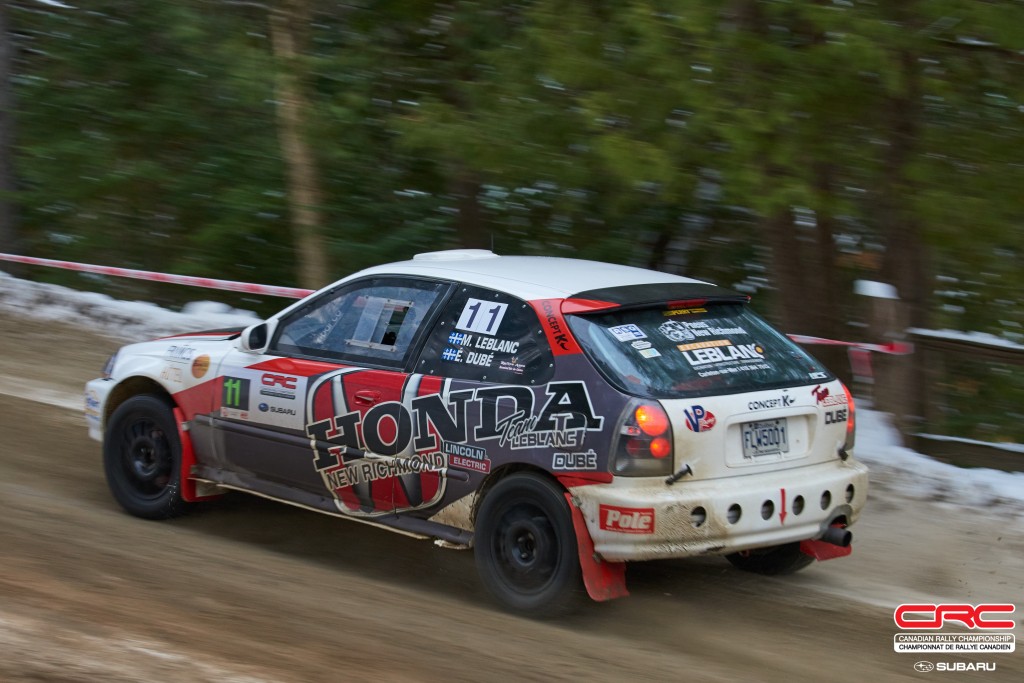 Meanwhile, for all the difficulties, Benoit was still happy to claim second place in class and tenth place overall.

“We were fast last year until we had a DNF,” said Benoit. “Our goal this year was to make sure we finished the rally. We set really good times this year, and except for the flat had no big issues on our way to the podium.” 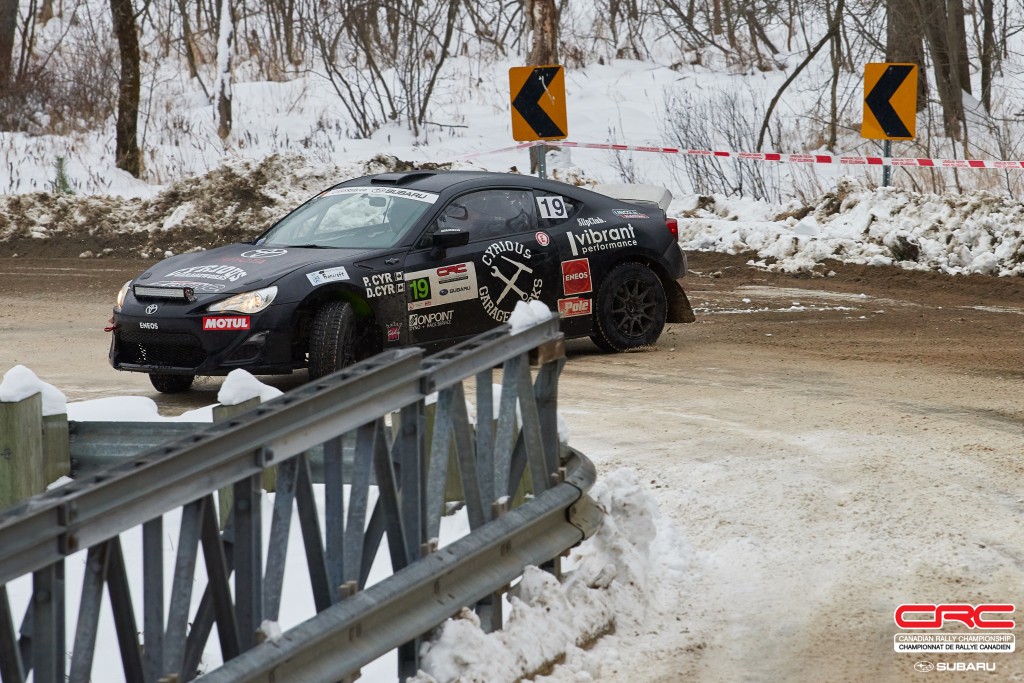 Third place went to the team that would have undoubtedly won the “Best Showmen” award if such a title existed. Drift competitor Patrick Cyr along with brother and co-driver Dan Cyr seemed to revel in the bad but consistent conditions. Initially the pair attempted to drive clean lines but didn’t feel confident about the grip. Reverting to a sideways style of driving, the team quickly became the crowd favourite and felt better behind the wheel. The team had typically been setting times outside the top ten though a clean run through the Egan stage gave the team a seventh fastest time. Later as the teams at the front slowed to minimize risk on the final pass through Lower Old Hastings, under the cover of darkness, Patrick and Dan Cyr set a third fastest time.

“We just drove in a way that felt comfortable,” said Patrick Cyr. “I know it’s not really the fastest, but for us, it’s a style where we’re most comfortable. I’d just grab the handbrake to initiate early and then get on the throttle once I could see the apex of the corner.

“I’ve been coming to this rally for years, watching the Iron Bridge stage and imagining my line through those corners, and I think we got it pretty much perfect today.” 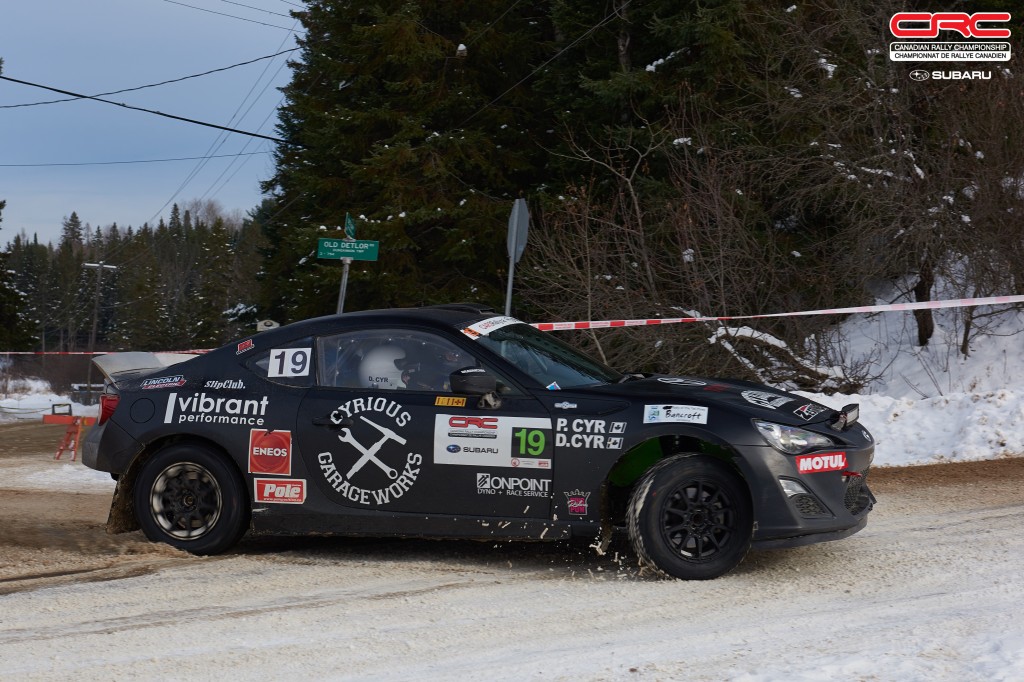 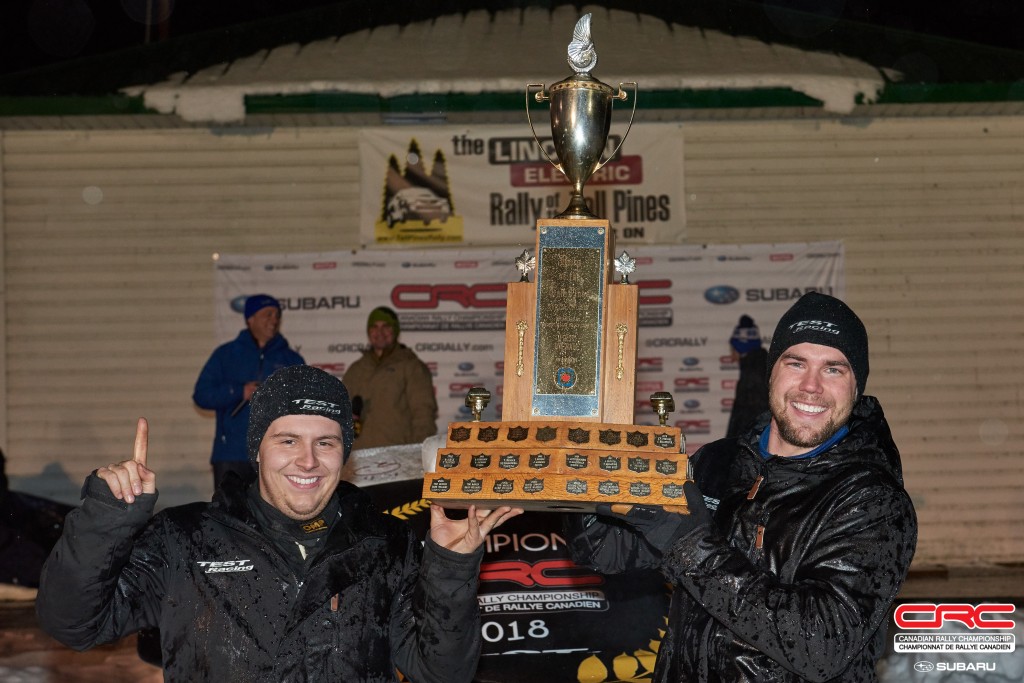 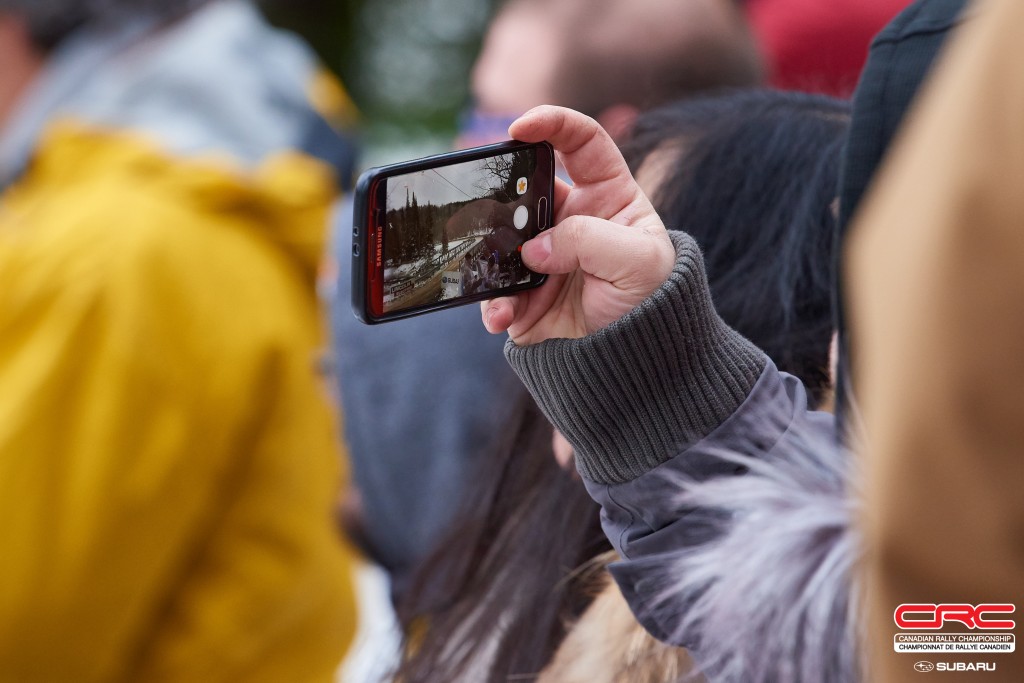 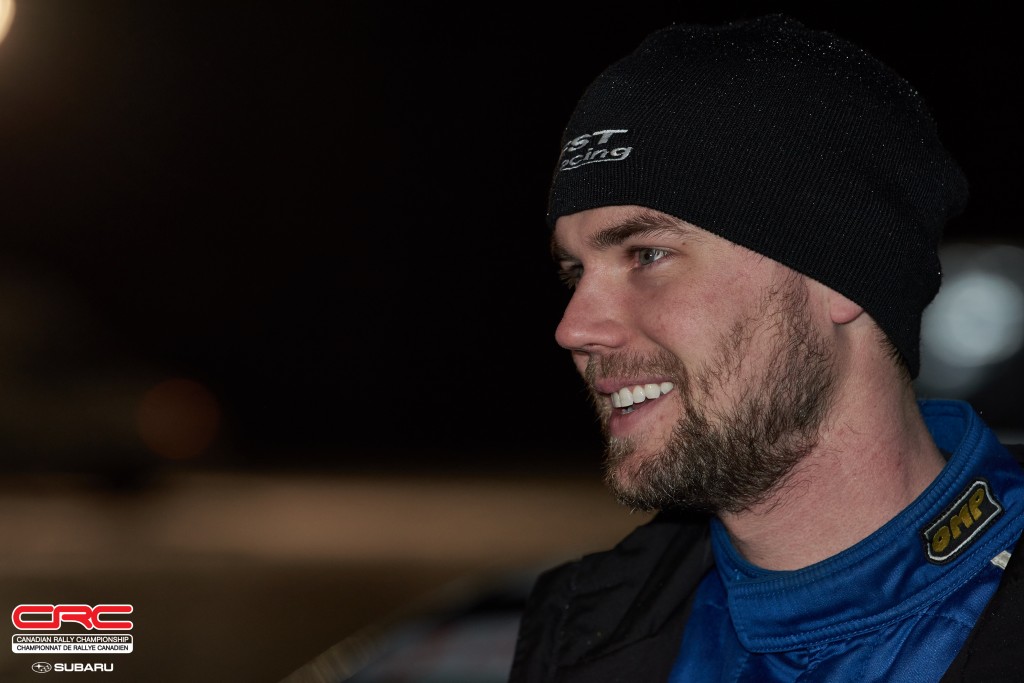 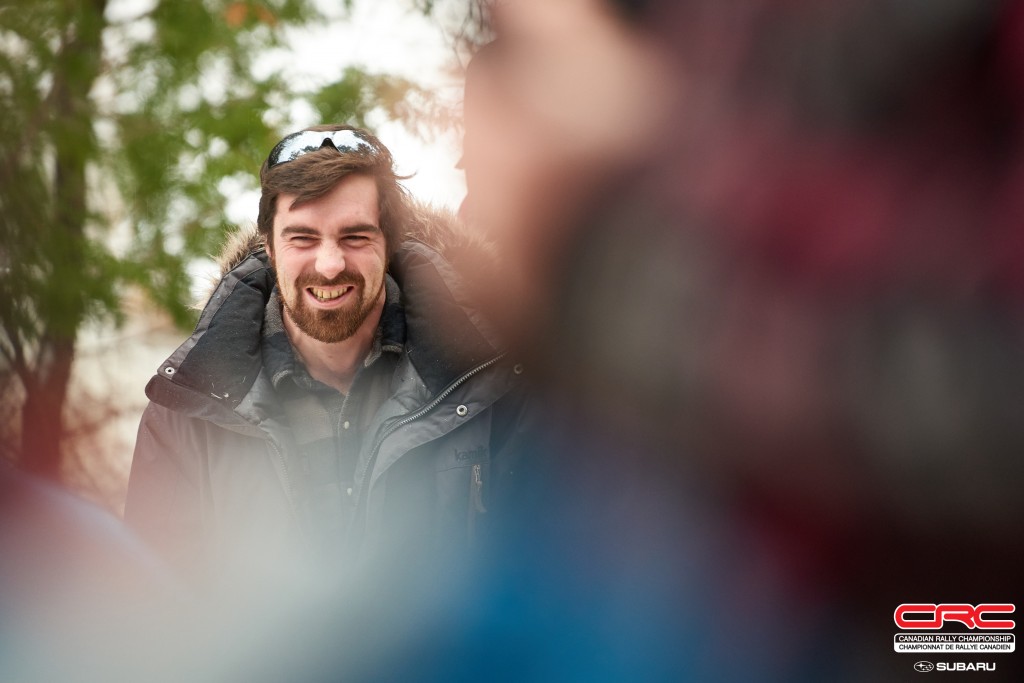 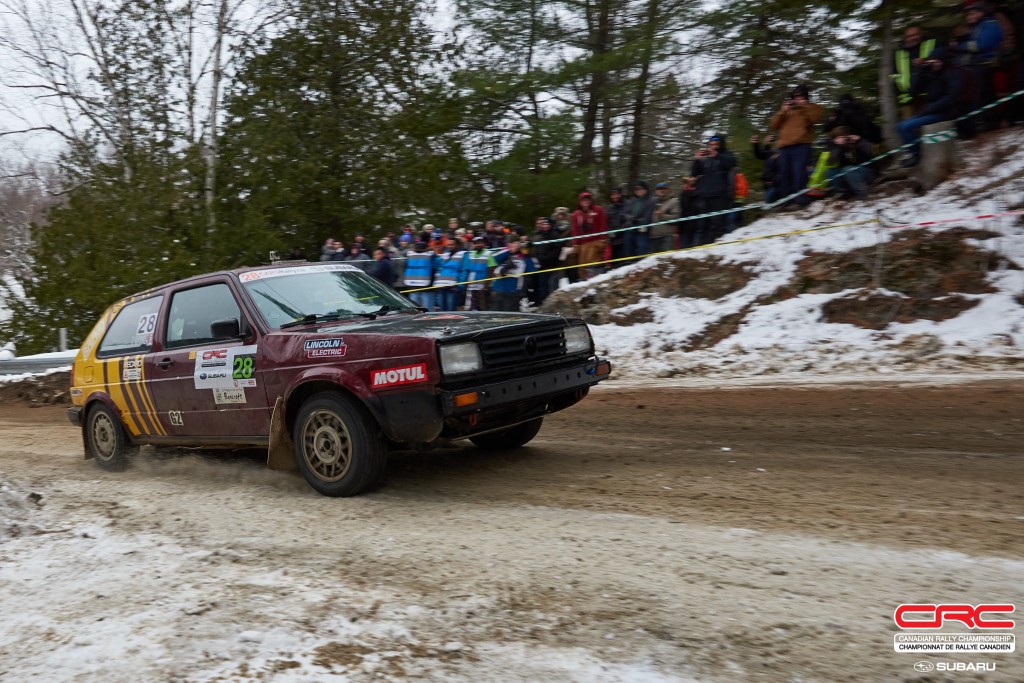 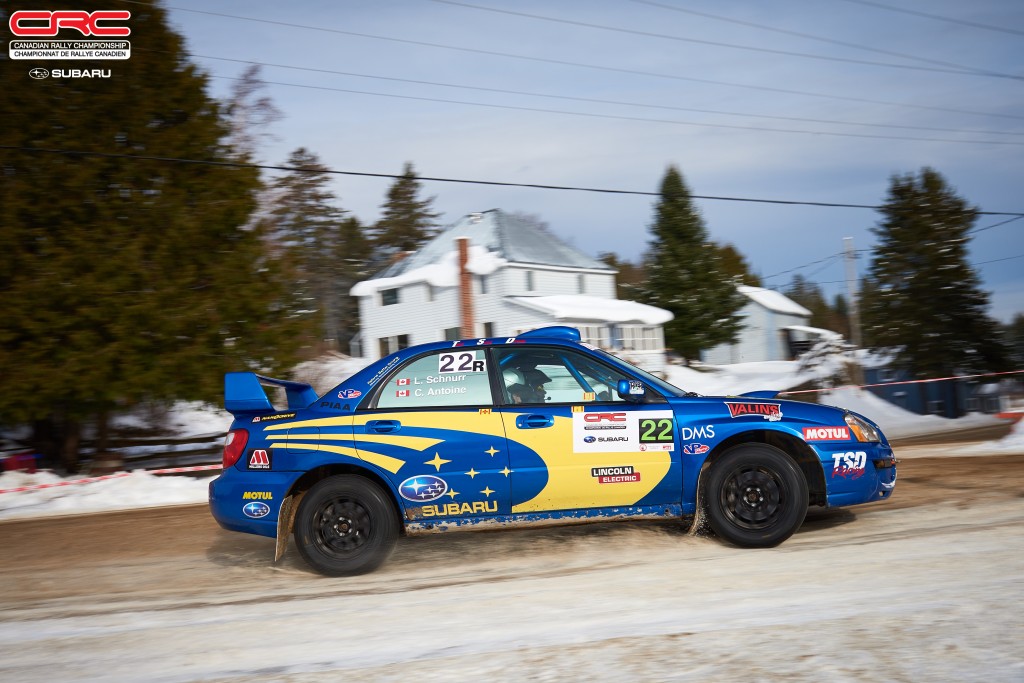 A dramatic final-stage shakeup at Rocky Mountain Rally saw the leaders drop off the top...
First Victory for Mailloux...

Held this past weekend in and around Montpellier, in Quebec’s Outaouais region, the 2021 edition...