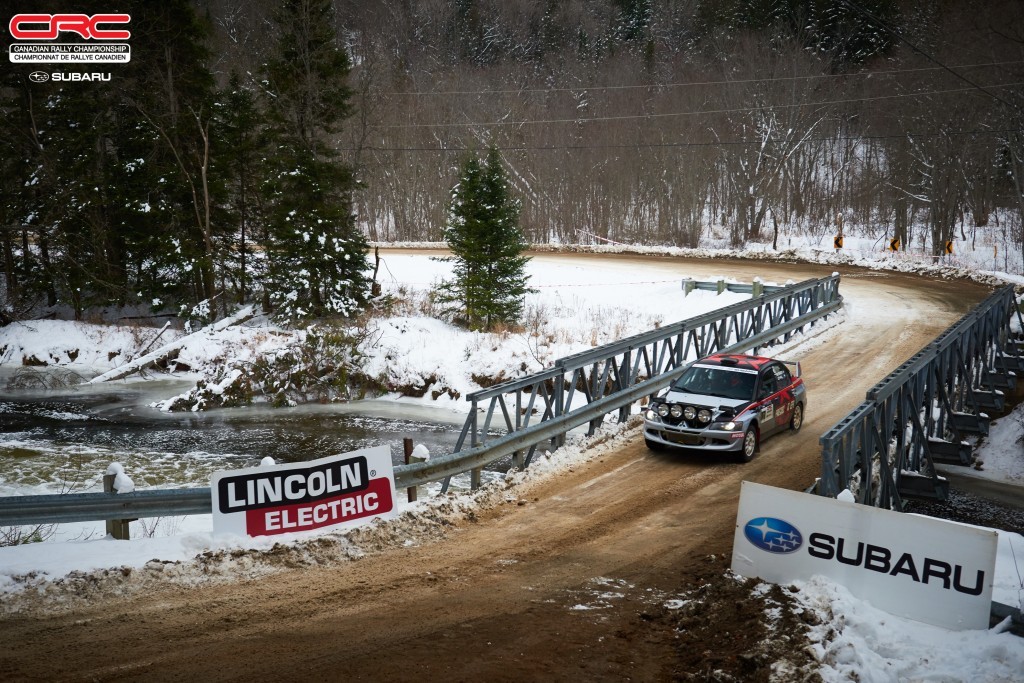 November 25, 2018.- This weekend, the final round of the 2018 Eastern Canadian Rally Championship (ECRC) was held as part of the traditional Rally of the Tall Pines, situated in the region of Bancroft, Ontario. The event is widely known for its  challenging conditions and this 2018 edition was no different. Contested in the rain and on icy roads, this year was no exception to the rule for the tight battles at the front of the pack.

Victory went to Montrealer Jean-Sébastien Besner, co-driven by Yvan Joyal in a Mitsubishi Lancer Evolution IX. This success, their fourth win in eight rallies that make up this year’s ECRC, allowed Besner to be crowned champion for a second time in three years.

At the front for the entire duration of the event, and even overall winner of four of the rallly’s eighteen competitive stages, Besner/Joyal finished the rally with a lead of 5 minutes and 42 seconds over Olivier Martel and Vincent Hubert (Subaru WRX STI). The latter duo, who started their rally careers this past February (at the season opener Rallye Perce-Neige) completed their rookie season in a fantastic way !

The podium, which was 100% made up of Quebec teams, was rounded out by  Sébastien Clark and Yanick Marin (Subaru WRX STI). Consistency once again enabled them to claim a second consecutive series podium, permitting them to complete the year as 2018 championship runners-up.

A great performance also came from Bancroft native Jeremy Drake, in front of his local fans, co-driven by Benjamin Drake in a Subaru Impreza RS. The team finished in fourth place and third highest Novice behind Martel/Hubert and Clark/Marin.

In two wheel-drive, Philippe Benoît and Ian Guité brought their Mini Cooper S to victory and also finished fifth overall in ECRC. This finish at the Rally of the Tall Pines allowed Benoît to take home his class championship title. His co-driver from previous events, Jonathan Desgroseillers, who was entered in 4 wheel-drive for this event, was replaced by Ian Guité, but Desgroseillers nevertheless claimed 2WD championship honours.

Martin Donnelly/Jonathan Desgroseillers (Subaru WRX STI) rounded out the Top 10 ECRC teams.  Also noteworthy from this 2018 running of the Rally of the Tall Pines 2018 is that Karel Carré and Samuel Joyal earned this year’s Canadian championship title.

The Eastern Canadian Rally Championship (ECRC) consisted of eight events this season, taking place in Ontario, Quebec, and the Maritime Provinces. The 2019 season will kick off next February with the Rallye Perce-Neige in Maniwaki, Quebec. For more information, please visit the website www.ecrc-crec.ca