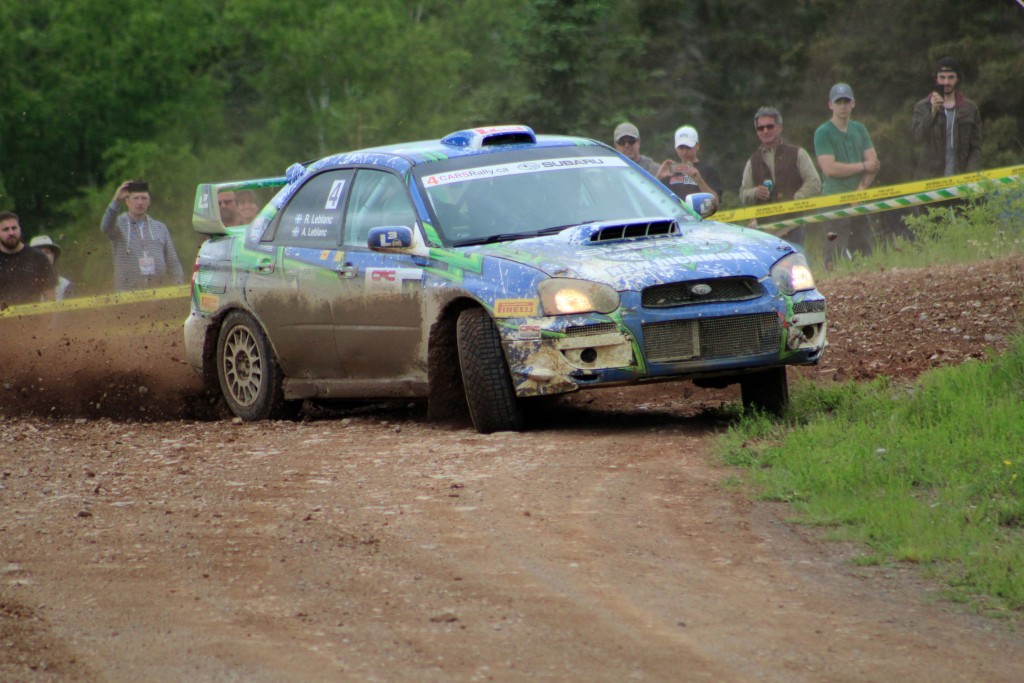 July 1, 2019.- Winners of the season opening Rallye Perce-Neige (Maniwaki, Québec), brothers André and René Leblanc also won this weekend’s third round of the 2019 Eastern Canadian Rally Championship season, the Rallye Baie-des-Chaleurs. Natives of New Richmond, where the event’s headquarters are located, the Leblancs united their many local fans, who only had eyes for their homegrown heroes throughout the duration of the rally.

At the wheel of their Subaru WRX STI, the Leblancs dominated the event from the first to the last competitive stage. Their lead never seemed in jeopardy as the duo mastered the region’s fast, narrow, and tricky rally roads.In the end, the brothers won by a margin of four minutes and forty-four seconds over Sébastien Clark and Yanick Marin (Subaru WRX STI), who had a remarkable and consistent drive.

The podium was completed by another team from the Gaspé region, Yves Boudreau and Danny Hudon, of Maria. They were competitive with Clark/Marin in some of the eleven stages counting towards the ECRC, and were one of the highlights of the rally in their Production 4-wheel drive Subaru competing against Open class cars. Boudreau/Hudon won the Production 4WD class by a margin of more than seventeen minutes faster than their closest class competitors!

In the overall ECRC standings, the local teams impressed to the point that yet another duo from the region (Caplan) made up of brothers Mikael and Manuel Arsenault (Subaru WRX STI), who rounded out the Top 4. The Arsenaults were eyeing a place on the podium but a mechanical problem on the sixth competitive stage cost them four minutes.

The top non-Quebec team at this popular event, which was watched by thousands of enthusiastic spectators along the roads, American Dmitri Kishkarev and his Albertan co-driver Michael Szewczyk finished in fifth place with their Mitsubishi Lancer Evo. This was the team’s highest ECRC result, just four seconds ahead of Steeve Hobbs and Philippe Poirier (Subaru WRX STI). Cal Vandaelen and Meg Grandmaison (Production 4WD Subaru Impreza RS), one of two teams that travelled from Nova Scotia, completed the event in seventh spot.

Marc-Olivier Leblanc and Marc-Olivier Cavanaugh, of New Richmond, finished in eighth position overall and won 2-wheel drive, realizing a new Gaspesian feat; they won both the overall 2WD class as well as the Production 2WD class in their revered 1990 Mazda Protégé! This duo also managed to finish in the overall ECRC standings ahead of Yves Barbe (of Laval), and his co-driver Ian Guité of Rimouski, in their Subaru WRX STI.

Barbe, who was making his comeback to competition after a fourteen year absence, was slowed down by several flat tires. He also needed to learn a new pacenote system, which is used in performance rally competitions, and familiarize himself with a car that he had never before driven. On the sometimes slippery roads following the rain, the Rallye Baie-des-Chaleurs challenge was not insignificant. Winner of the event in 1993, Yves Barbe nevertheless had the satisfaction of finishing the rally in ninth ECRC place and at the wheel of a vehicle that is going home without even a scratch!

Rounding out the Top 10 of the ECRC were Mathieu Leblanc and Éric Dubé (Honda Civic). Winner of multiple series events last season, the duo, also from the Gaspé region, lost all hope of winning two-wheel drive when they suffered a broken axle on the fourth stage. Regardless, Leblanc/Dubé were able to win the 2 Wheel Drive Open class.

The Eastern Canadian Rally Championship (ECRC) consists of eight events, spread out between Ontario, Quebec, and the Maritime provinces. The next round, in less than two weeks, will be the Black Bear Rally, in Ontario.

Karel Carré kicked off the 2020 Canadian Rally Championship with a convincing win at Rallye...
Semenuk dominates at Big...

Brandon Semenuk and John Hall piloted their way to a dominant win at the Big...
New winter rally added...