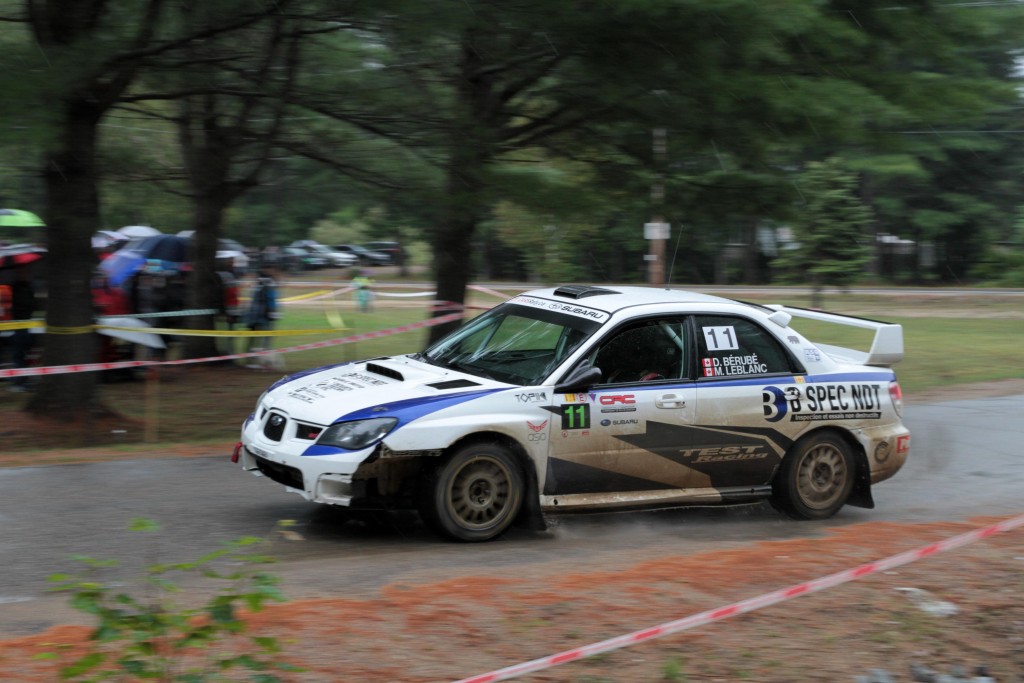 September 8th, 2019.- Rallye Défi, the sixth of eight rounds in the 2019 Eastern Canadian Rally Championship (ECRC) was presented this weekend in the Outaouais region of Quebec (Montpellier and Ripon in the Papineau municipal county), experiencing many rebounds throughout the weekend. In the end, victory went to the duo composed of David Bérubé and Marilou LeBlanc (Subaru WRX STI).

Held under rainy skies for a majority of the competition, the event quickly saw its top ECRC competitors among the Top 10 overall, in the form of Olivier Martel/Vincent Hubert (Subaru WRX STI) and David Bérubé/Marilou LeBlanc.

After an error-free rally, David Bérubé and Marilou Leblanc claimed the win with a margin of one minute and fifty-six seconds ahead of Martel/Hubert. This was their first victory at the event and in the series, which has now crowned five different winners in its six rounds this season! It was an extra sweet weekend for the Test Racing team as Bérubé/LeBlanc’s teammates Karel Carré and Samuel Joyal came out on top of the overall standings in this rally for the Canadian championship and the North American Cup.

In ECRC, fastest on the first few competitive stages was Sébastien Clark and his co-driver Yanick Marin (Subaru WRX STI). Unfortunately, a mechanical problem at the end of the morning on Day 2 cost them their chance at victory, just prior to the ever-popular stages in Montpellier. Dropping down to eighth place in the ECRC standings, the Swap Shop team duo still finished the event in seventh place overall and third in Open 4-wheel drive, which keeps them in the hunt for the 2019 title.

Missing from the series’ last two rounds, two-wheel drive competitors were back in action at the Rallye Défi, with tight battles that separated the top two in the class by mere seconds and also fought for ECRC Top 3! Philippe Benoît and Maxim Gagnon (Mini Cooper S) won the class, also finishing third overall in ECRC, ahead of Matthew Ballinger and Bruce Leonard (Production 4-wheel drive Subaru Impreza WRX).

Fifth overall and second in 2-wheel drive were Mathieu Leblanc and Éric Dubé (Honda Civic) of Gaspésie, finishing in front of Julien Rondeau and Jonathan Raymond, also in a Civic.

Behind Clark/Marin in seventh, the Top 10 overall was rounded out by Stéphane Hudon and Julien Cyr (Subaru WRX STI), Thierry Champoux and Gaëlle Agliata (Volkswagen Golf – 2WD) and the duo of Jonathan and Benjamin Drake (Subaru WRX STI).

The Eastern Canadian Rally Championship (ECRC) consists of eight rounds, spread out between Ontario, Quebec, and the Maritime provinces. The next event will return to Quebec for the prestigious Rallye de Charlevoix on October 18th and 19th. This will be the penultimate round of the 2019 season.