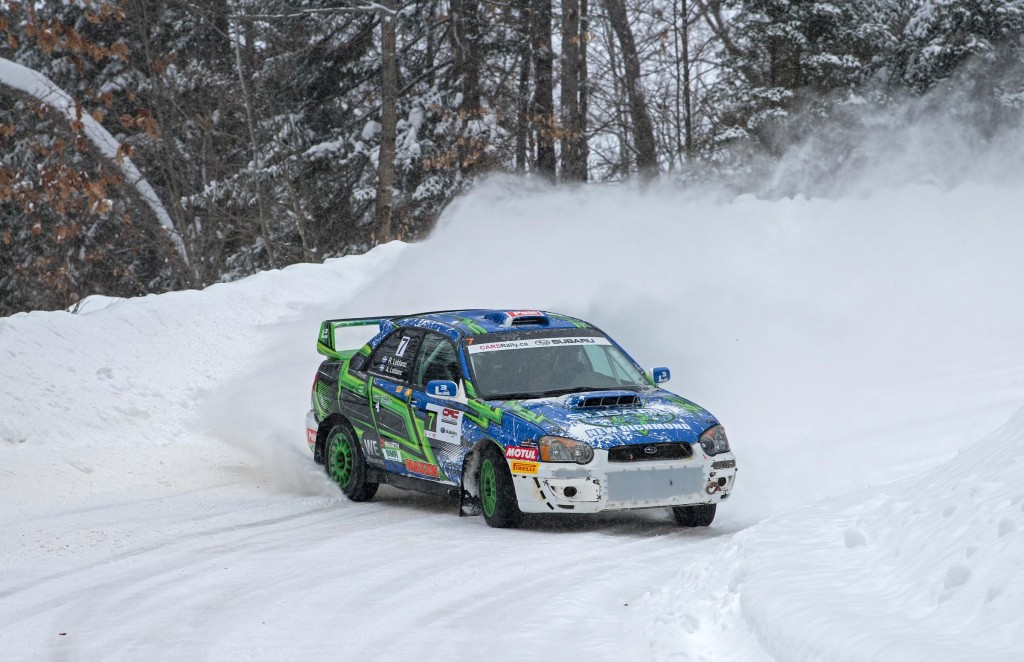 February 3, 2019.- This past weekend, the Rallye Perce-Neige took place in Maniwaki in the Haute-Gatineau region of Québec, as the inaugural event of the 2019 Canadian and Eastern Canadian calendars. This fifty-fourth edition and the first of eight rounds in the Eastern Canadian Rally Champions (ECRC) saw victory go to André and René Leblanc, in a Subaru WRX STI. This was the second consecutive win for the brothers from the Gaspé area, after winning this event in 2018.

The Leblanc brothers practically led from the beginning to the final ECRC standings of this classic event, whose snowy and icy roads were always a challenge. In the Aigle forest, where the rally can often be won or lost, the gap remained relatively close, which was more proof of this year’s strong level of competition.

In the end, the Leblancs won with a lead of 58.5 seconds ahead of Marc Bourassa and co-driver Élise Racette, also in a Subaru WRX STI. The podium was completed by local heroes Olivier Martel and co-driver Vincent Hubert. After a very impressive start in motorsports at this event last year, Olivier Martel earned yet another excellent result in front of his fans.

David Bérubé and Marilou Leblanc rounded out the Top 4, 100% of which were driving Subaru WRX STIs, ahead of 2 wheel-drive winners Philippe Benoît and Ian Guité in a Mini Cooper S.

Returning near the front of the pack towards the end of the event, after having conceded a lot of time following a broken driveshaft early in the event, brothers Mikael and Manuel Arsenault (Subaru WRX STI) finished the ECRC event in sixth place, one step ahead of the novices Ouellet/Delisle 9subaru WRX STI) and the second-place two wheel-drive team of Malcolm Swann (of Prince Edward Island), and his Quebec co-driver Martin Cadieux in a Volkswagen Golf GTI.

The eleventh and twelfth places went to Sébastien Clark/Yanick Marin in their Subaru WRX STI and Jean-Sébastien Besner/Yvan Joyal in their Mitsubishi Lancer Evo, two teams that were expected to battle for the victory but instead finished 26 and 31 minutes from the winners, respectively.  Between mechanical problems and off-road excursions, the 2019 edition of the Rallye Perce-Neige is one to forget for these two previous ECRC event-winning teams, but the season is still very long with plenty of time for them to climb up the standings.

The Eastern Canadian Rally Championship (ECRC) consists of eight rounds this season, spread out between Ontario, Quebec, and the Maritime Provinces. The next round, the Lanark Highlands Forest Rally, will take place on May 4th, in Ontario.

The 2019 Rallye Perce-Neige 2019 also counted as part of the Canadian Rallye Championship and the North American Rally Cup. The team of Quebecker Antoine L’Estage and Ontarian Alan Ockwell (Subaru) earned the overall victory for both of these championships.

Karel Carré kicked off the 2020 Canadian Rally Championship with a convincing win at Rallye...
Semenuk dominates at Big...

Brandon Semenuk and John Hall piloted their way to a dominant win at the Big...
New winter rally added...