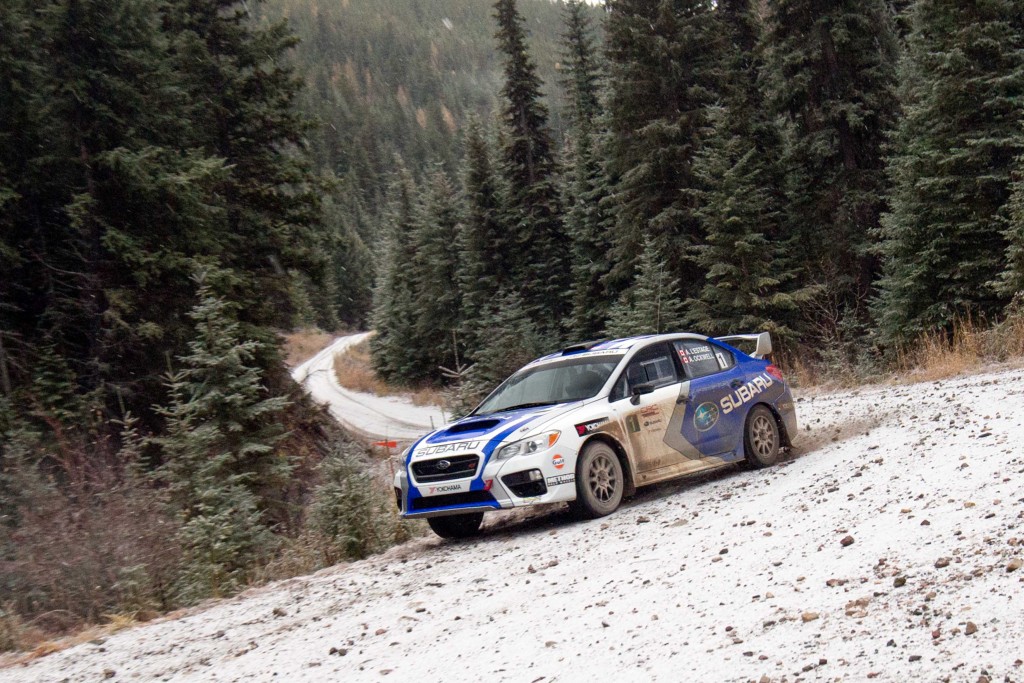 The pair were declared winners after storm conditions engulfed the course, forcing organizers to cancel the final three competitive stages.

“We had a problem on the first stage of the event, but the guys in service were able to make the car perfect again,” said L’Estage. “From there, we went on to win all of the rest of the stages at the rally, and take a big lead.

“This is a great event for all of us on the team. Everyone is so passionate about the sport and dedicated to having a winning performance. To earn the driver, co-driver and manufacturer championship titles really makes this a perfect event for us.”

Hardy Schmidtke (Red Deer, AB) and John Hall (Sherwood Park, AB) maintained a constant pace from start to finish, earning a second place result. The team’s experience helps the pair maintain a consistent approach to the rally, even as conditions deteriorated through the event.

“Our focus was on maintaining a consistent pace through the rally,” said Schmidtke. “Conditions later in the event became really challenging to the point where we simply focussed on getting to the end safely.”

Boris Djordjevic (Edmonton) and Chris Kremer (Calgary) earned their first Canadian Rally Championship podium together. The team has been increasing their pace as they’ve developed their car.

“All of the team’s hard work paid off,” said Djordjevic. “Everything has been improving and I think it’s all looking up from here. Every time we had the car running well we were able to put in top three times, so we’ll be in a good position for the next event.”

Eric Growchowski (Calgary) and Bill Dubreuil (Nanton, AB), dominated the two-wheel-drive competition in a rear wheel drive Corolla. Grochowski had borrowed the car from a good friend to be able to compete this season, and proved the trust well founded by finishing atop the podium.

“The result was far better than we expected this weekend,” said Grochowski. “I’m personally proud to have won here in a front wheel drive car in the past, and now a rear wheel drive car. I have to congratulate my co-driver Bill. This is only his second event ever and I put him under a lot of pressure and he delivered.”

The Rocky Mountain Rally is the penultimate round of the 2015 Canadian Rally Championship calendar. Run on the mountain roads outside of Invermere and Radium Hot Springs, B.C., the 2015 edition was cut short when a storm moved into the area on the second day of racing. With blizzard conditions on much of the course, organizers opted to cancel the last three stages of the rally. The results to that point were declared final and teams returned to rally headquarters for the awards ceremony.