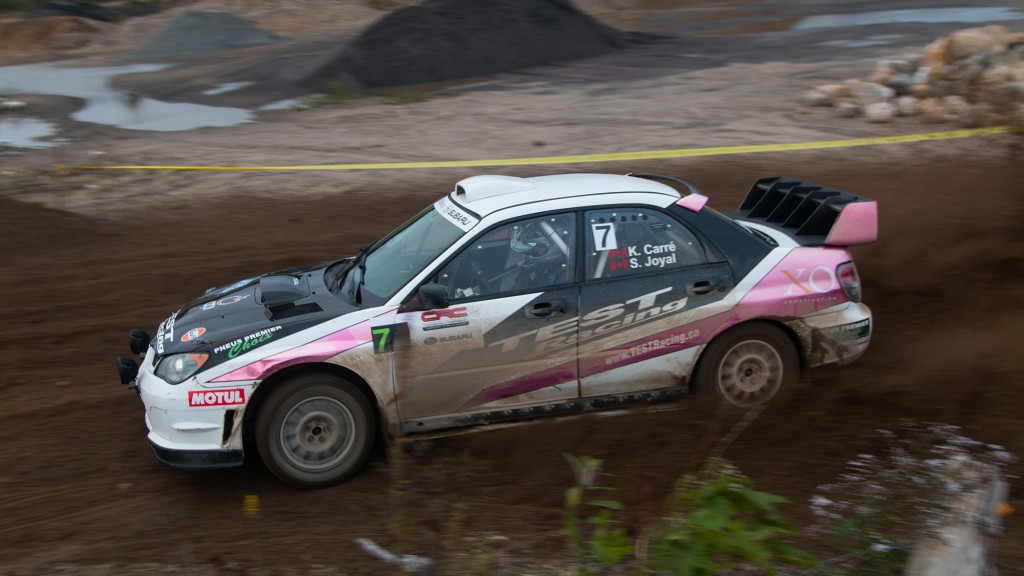 Karel Carré has been competing in rally and quickly made a name for himself as a fast driver. Son to Bruno Carré, Karel has recently joined the Test Racing team, and despite some setbacks at Rallye Défi, was setting many top 3 stage times during the rally.

Carré is now looking ahead at 2018 and determining his future plans in the CRC. Learn more about this driver from Saint-Sauveur, Quebec.

CRC: What are your earliest memories of rallying?

KC: I’ve always been interested in the sport because of my dad, Bruno Carré. I remember leaving school on Friday afternoons to go see my dad at rallies. There’s one rally where a friend of my mom’s came to pick me up at school in Saint-Jérome on a Friday afternoon and she drove a few hours to get to Maniwaki, Quebec for Rallye Perce Neige. She dropped me off and drove back home only so I could see my dad drive! I was maybe 10 or 12 years old at that time but I was interested on following my dad around the rallies close to home.

CRC: You’ve developed into a fast driver quickly, but have had some challenges too. What has been the hardest lesson to learn?

KC: My dad helped me get to a fast driving pace quickly by showing me all he knew and learned to be true all these years in the sport. Making notes was the hardest thing to learn but yet the most important if you want to go fast and have 100% trust in your notes. There’s no place for mistakes at that speed or you end up in the trees! For me the hardest lesson was about 2 years ago when I had my biggest crash at Rallye Charlevoix, which was the last rally of the regional championship and I was head to head with Jean-Sébastien Besner. I watched my videos from previous years and redid all my notes. I put in so many hours in preparation just to make sure I was at my best to win the championship. Sadly I lacked experience and couldn’t handle the pressure so I went all in on the first few stages and thats where we crashed. With that setback, it was all my fault and the lack of experience was the main reason. We learn from our mistakes!

CRC: How did you come to join Test Racing?

KC: Some changes came up at my old team Swapshop, and I was looking for a new prep team when Mathieu approached me to discuss about his team and what he could do for me. It’s a young team with a lot of potential and ready to work hard for their clients. I’ve only done two events with them and so far I’ve been really impressed. It was good timing!

CRC: You and your co-driver Samuel Joyal both have fathers who compete. What advice has meant the most in your own competitive career?

KC: My father has always told me, there’s maybe 1000 corners in a rally and every single one of them is important. You need to go through as fast as possible but it only takes one mistake in one corner to lose the race. Rallying is hard and to win you need to pass the finish line which is sometimes harder then going fast.

KC: For now we need to get some seat time with Samuel on gravel stages because Défi was the fist time for him in the car with me. The team also needs to get familiar with the car because it wasn’t built by Test racing and lots of things are made differently. The car also needs some love and more competitive parts which plays a role in the budget department! So we will be at Charlevoix this year and Perce Neige next year for sure. My goal is to get enough sponsors so we can do a whole CRC year and maybe win the championship – who knows! But getting to that level involves a lot of time and money so we will see how things line up for us in the next few years.