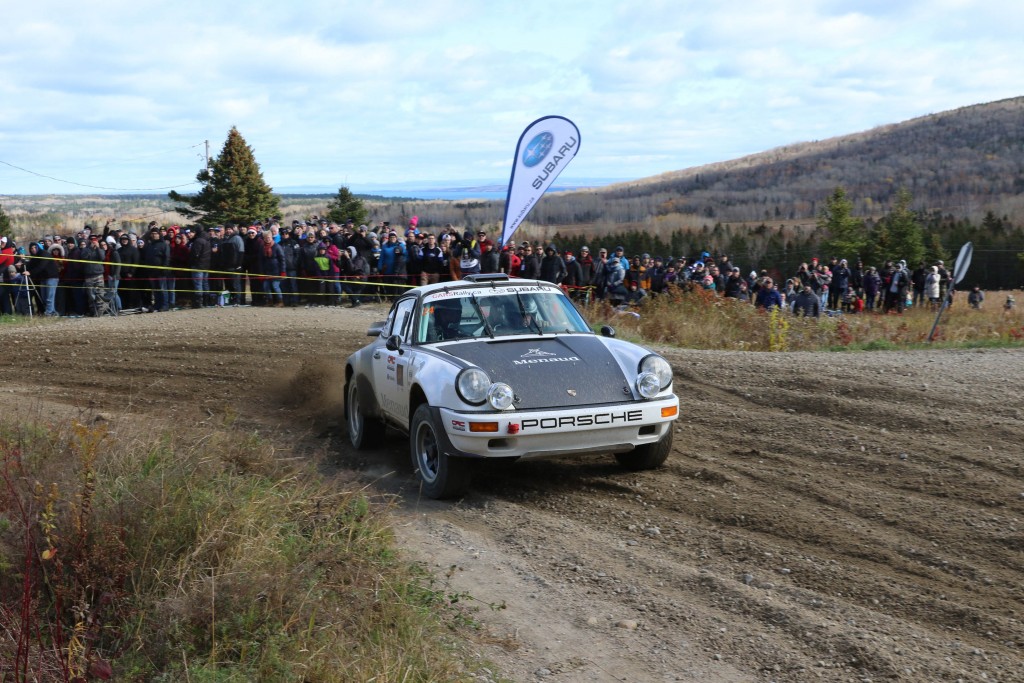 July 9, 2020.- The 2020 edition of the Rallye de Charlevoix will be presented in La Malbaie (Quebec), October 23-24. Even if it’s difficult to project into the future to imagine what the laws will be in October and the level of the pandemic. Take note that the preparation is going well.

For your information, here is some news that you may find useful:

– Duration of the event: it will be reduced compared to previous years. We plan to have the reccee and shakedown on Friday October 23 and the event on a single day of competition, October 24. Start around 8 am and finish within 9 pm.

– Ceremonial start, podium, banquet: no ceremonial start or banquet in 2020. The podium area should be allowed to CRC TV crew and a very small number of photographers pre-approved (with special sticker on tabard or pass) by the organization. Presence of team members to be confirmed depending to distancing laws in Fall.

– Access to HQ and the service area: P9 parking, just before entering the service area (P10) is our option for all vehicles other than official and competitors. We plan to ban access to the service area from anyone who does not have a pass (official, volunteer, media).

– Interactions with competitors, officials, volunteers and the media: as much as possible electronically and in advance. To contact our staff:

Or Philippe Brasseur, president of the club, crdc@rallyecharlevoix.com

– Crews: in cooperation with CARS, we plan to make mandatory the wearing of a nomex balaklava, as on road racing, during special stages and mask during transport sections if the driver or the co-driver wants to remove their nomex balaklava. The mask is also mandatory in the service area when mechanics have to work within two meters of each other.

– Officials and competitors travels: the Canada-USA border should be reopened in October and traffic between the provinces is already restored. Several karting and road racing teams are currently traveling between Ontario and Quebec.

– Route authorizations: they are all requested and last approvals should be received next week. Timetable and the draft of the special regulations will be sent to the CRC manager within 2 weeks, for corrections.

– Communications and pre-event meetings: we have held several meetings by videoconference since April, with key people from the organization. Things have progressed well on the essential points.

– Promotion: everything will be done to have competitors and volunteers, but nothing to attract spectators. At the moment, we do not have negative feedback from volunteers. However, we will have fewer sponsors because many of them have lost money with their closed business in Spring and will not sponsor this year. This is why we cut expenses as much as possible.

– Accommodation: all the hotels are currently reopened in Charlevoix, including Manoir Richelieu, our HQ. We already have the agreement to use the parking lots (P9/P10) and the HQ building.

– Restaurants: most of them have reopened. They have all implemented the new standards of distancing imposed by Ministry of Public Health.

– Spectator areas and interactions with the public: for the moment, we are maintaining spectator areas. Ministry of Public Health actually requires a distance of 2 meters or the wearing of a mask. If the law does not change, we can accept spectator areas by recommending the wearing of a mask. If the situation deteriorates in fall, we will be able to have a schedule without any in-town stages and without any spectator area because these stages are the first two and the last two of the rally. So, it’s easy to remove them without making a complete new schedule or route book. Actually, the first option is WITH the in-town stages.

Nobody knows what the situation will be in the fall, but it’s important for us to move forward as if the rally was going to be a “normal edition”. It is easier to make corrections and apply restrictions to an existing rule or schedule than to create one when all the laws will be in application in October, because that can still change a lot.

In conclusion, we absolutely want to present our event. We will only cancel the Rallye de Charlevoix 2020 if required by potential new laws. We think it’s important for the competitors who are eager to be back in action, but, also for the region. Actually, reservation for the tourism summer season is around 55% but, should be less in fall. The rally will be the ONLY event that will bring visibility for the region this fall (the fact that CARS guaranteed the TSN/RDS TV show this year was an important positive point) so, sportingly, we want to do it for the love of rally competition, but socially and economically. It is a duty for the region!

We are looking forward to welcoming you at the Rallye de Charlevoix 2020!