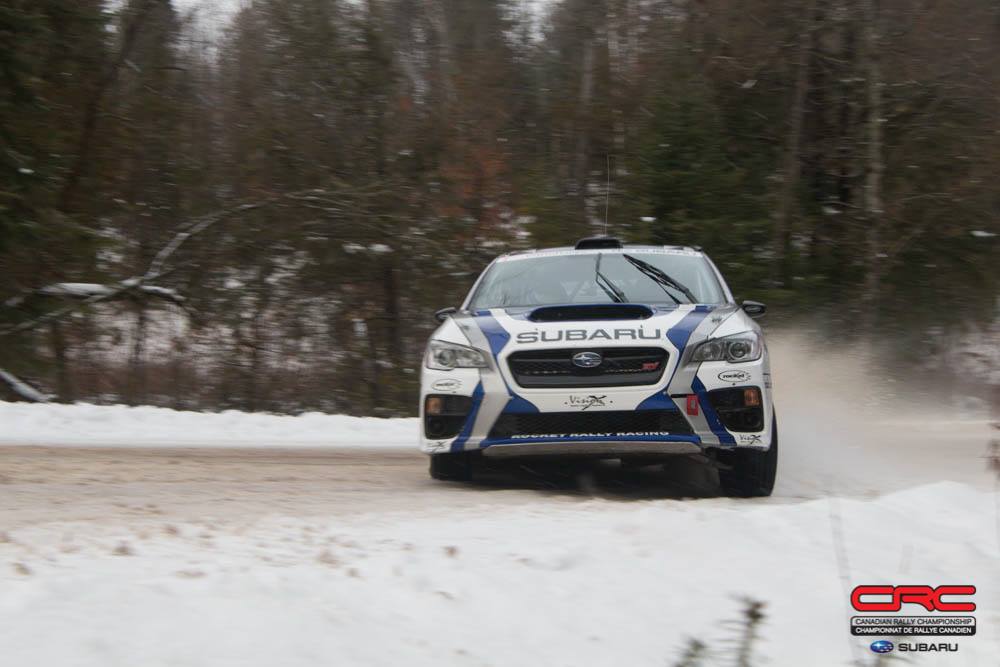 After a long and difficult day in challenging conditions, the Subaru Rally Team Canada pairing of Antoine L’Estage and Darren Garrod were victorious at the 2016 Rally of the Tall Pines. The result is especially important for the team, who struggled earlier in the season and had to make up ground in their bid for the Canadian Rally Championship title.

“These conditions are probably the worst I have seen in the 15 years I’ve done this rally,” said L’Estage at the ceremonial start early this morning. Temperatures hovered around the freezing mark for the 24 hours leading up to the start of the event, turning the road surface into a mix of melting and refreezing snow and ice, gravel, and mud. 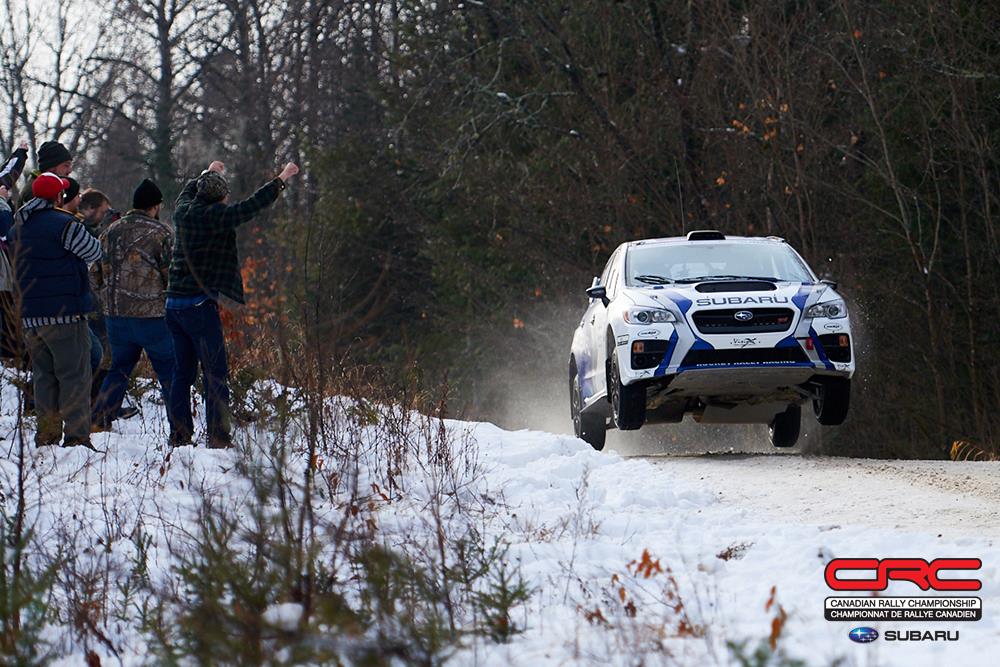 L’Estage took command of the event from the very first stage, taking over 20 seconds out of his closest rivals, Travis Pastrana and Robbie Durant of the Subaru Rally Team USA. Pastrana and Durant were on hand to develop their pacenotes and were the team most likely to push L’Estage and Garrod.

“We came here with the goal of getting back into the lead of the Canadian Championship, but with Travis here I knew it was going to be very strong competition,” said L’Estage. “At the end to win the rally, and beat these guys is just perfect.” 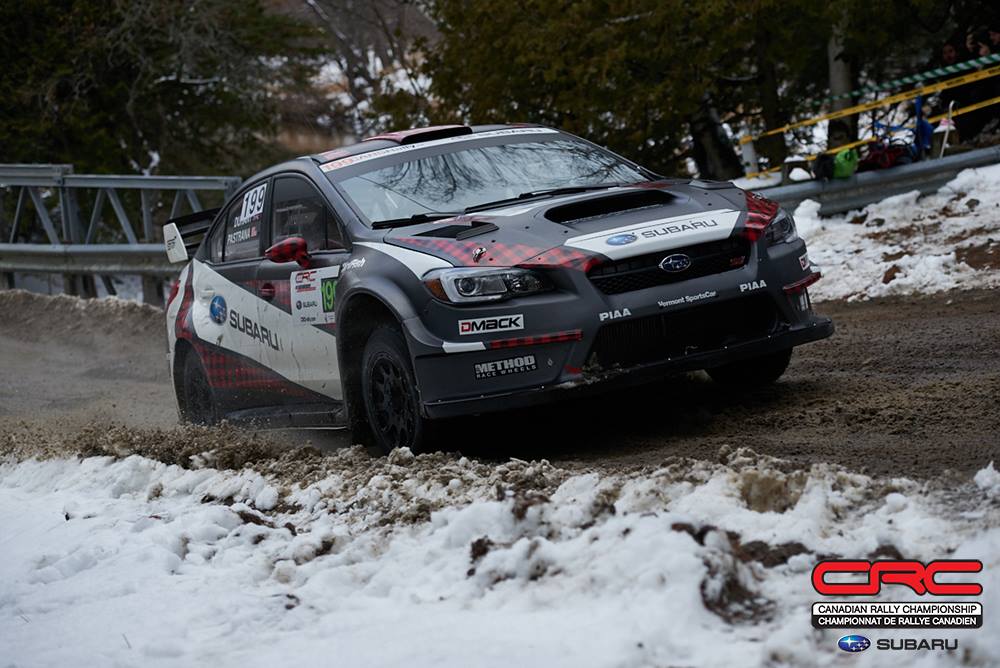 Pastrana had only rallied in Canada once before; taking part in the Black Bear Rally, an Ontario regional event in 2008. With less experience in making notes, and on his first attempt at the Rally of the Tall Pines, he and Durant set some impressive times, beating L’Estage on five stages during the event.

“When the roads are tight and snowy and technical, L’Estage pummels us,” said Pastrana partway through the day. “When they’re wide and open and fast, we just edge him out.” 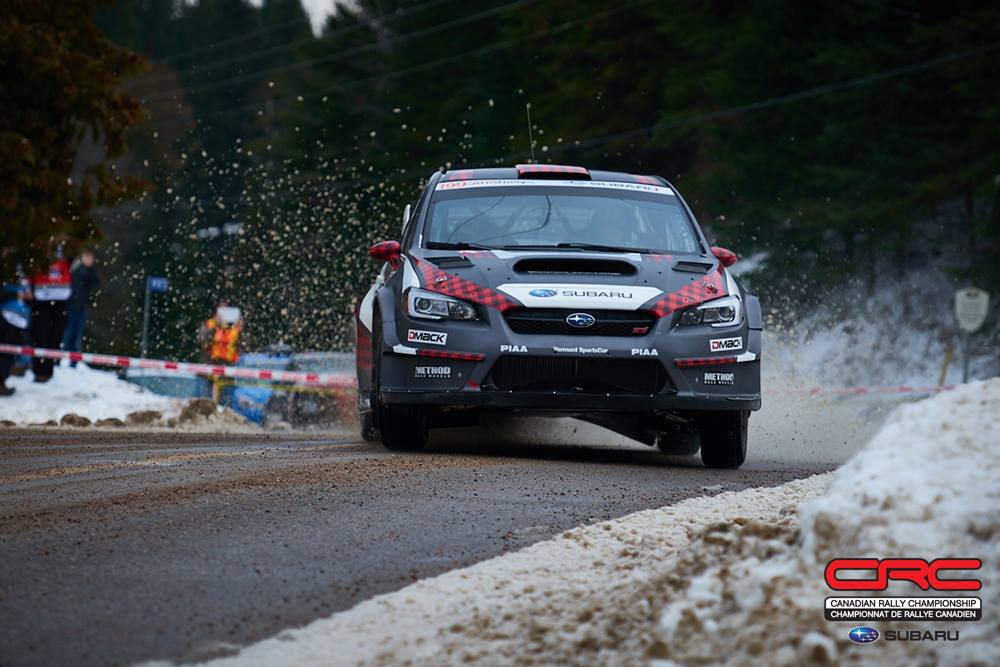 But Tall Pines is a rally of tight and technical roads, and L’Estage has a career worth of experience at this event to draw on. Pastrana lost additional time with suspension problems and a flat tire, But finished a strong second place in his Tall Pines debut.

“We ended up tearing the suspension out of a corner of the car, but the crew was able to get us out with only a little bit of penalties,” said Pastrana. “It went from a race to survival, but we managed to finish in second so I’m still really stoked.” 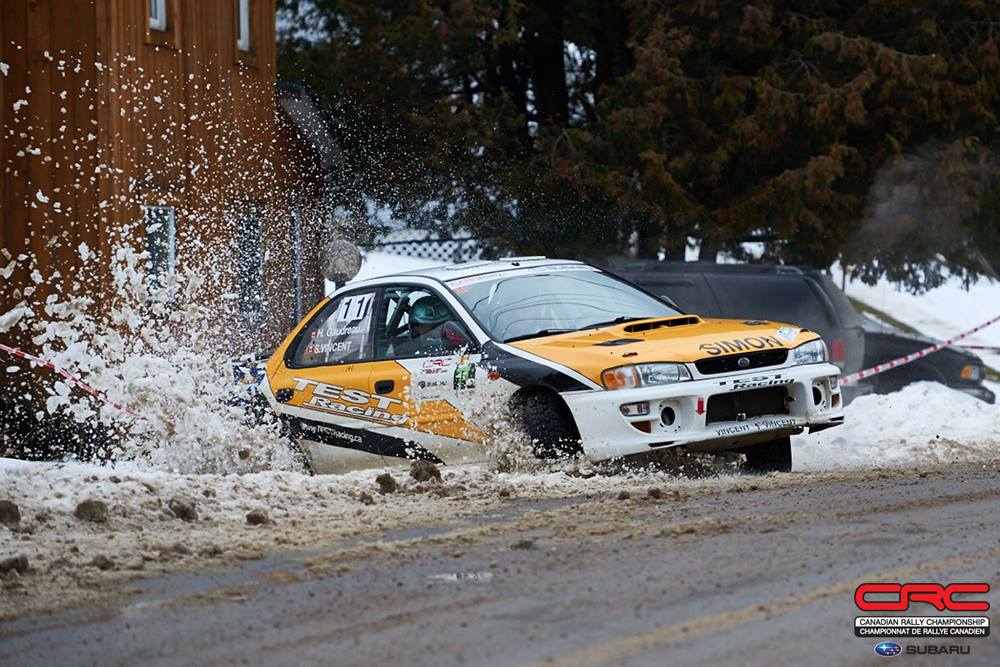 A year after co-driving his father to victory at the 2015 edition of the Rally of the Tall Pines, Simon Vincent clinched both the national Novice, and Ontario regional titles, and finished third overall at the Rally of the Tall Pines. The young driver, co-driven by Hubert Gaudreau, had problems of their own but were able to get a clean pass through the final pass of Egan Creek, while others all seemed to struggle.

“Something magical happened for us in that last loop,” said Vincent “We started in a battle with David Nickel, passed him when he had a flat and then just a little while longer we came upon Labrie who was repairing a flat. It was at that moment I realized I was going to be in third position.” 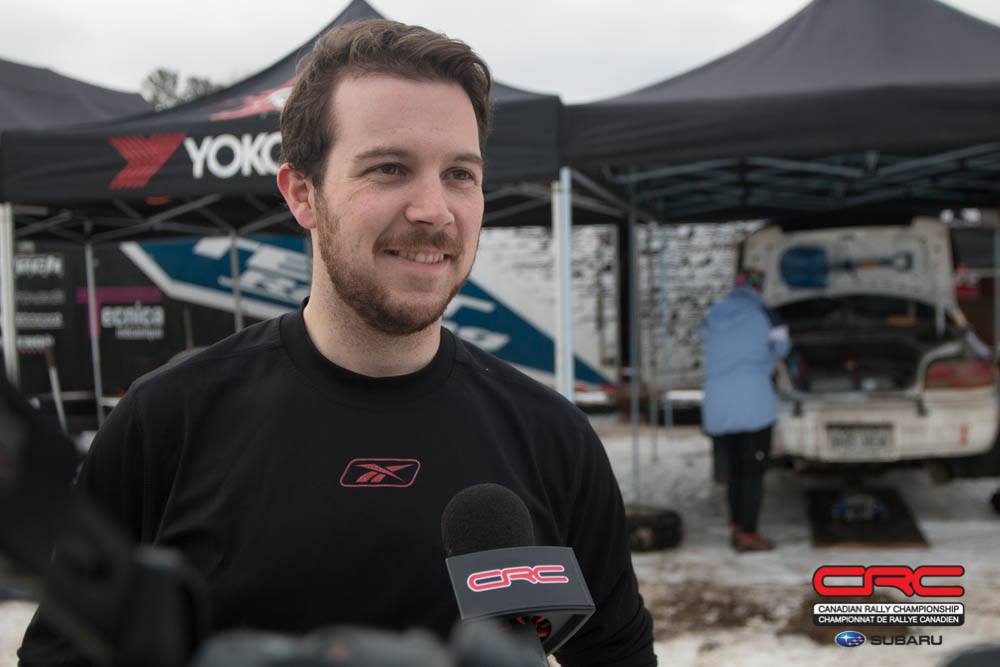 The Rally of the Tall Pines is most demanding as the sun sets, and drivers are exhausted. The difficult conditions compound the chance of problems. Of the more than 30 starters, only 9 teams made it to the end of the event.

Agatino Fortunato was the lone production class finisher, critical in a championship battle that has come down to the wire and won’t be finalized until the Big White Rally in two weeks time. The Bayliffs would have been the main competition until they faced significant problems including three flats on the first pass of the Egan Creek stage. 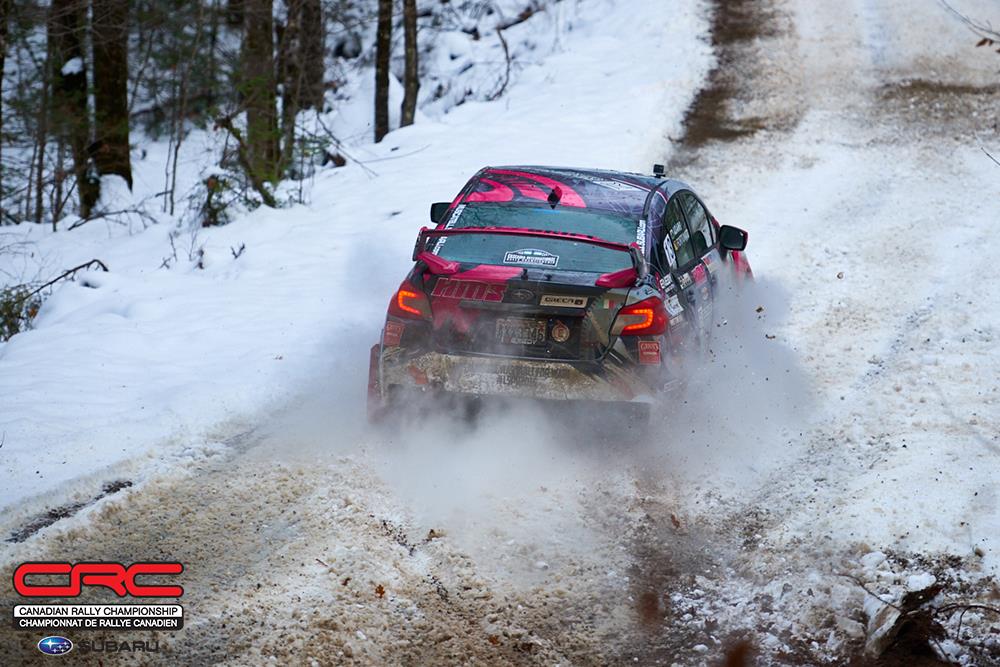 Jason Bailey and Shayne Peterson have taken a commanding lead in the two wheel drive title fight. While there is a mathematical chance the Zedrils could win the title, the brothers are not expected to enter the final round of the year. In that scenario, Bailey and Peterson will become the 2016 two-wheel drive champions.

“The last stage was bloody epic. We got our fourth flat of the day, but I said ‘we’re gonna run it out, I don’t even care’,” said Bailey. “We had 20km to go, but I did the math and we were a minute ten back and I knew we could get it back…but not with another flat. The big water crossing caused all sorts of problems. We got stuck, Jim Stevens got stuck, the Mitsubishi got stuck. I didn’t quite cry, but I channeled the spirit of Antoine ‘never give up’, we got it going again and managed to make it just 4min before max late.” 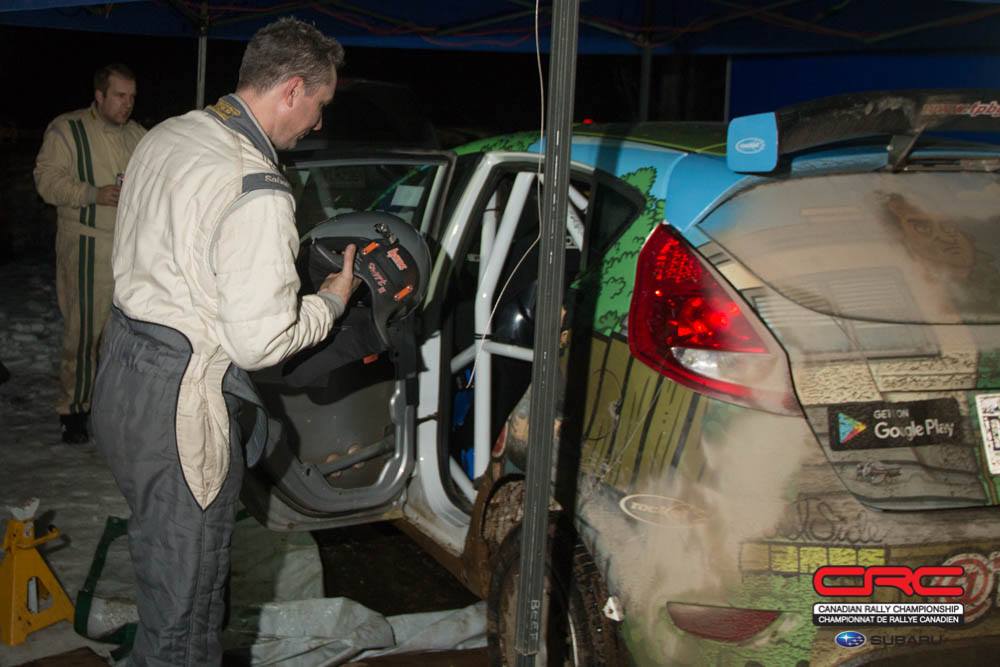 The final round of the 2016 Canadian Rally Championship season is a new addition to the series, the Big White Rally in Kelowna, BC. Held December 10-11, Big White has run as a regional for a number of years and has a reputation for deep winter conditions. With most of the championship titles still mathematically up for grabs, Big White becomes the ring in which the final round of the title fights will take place. 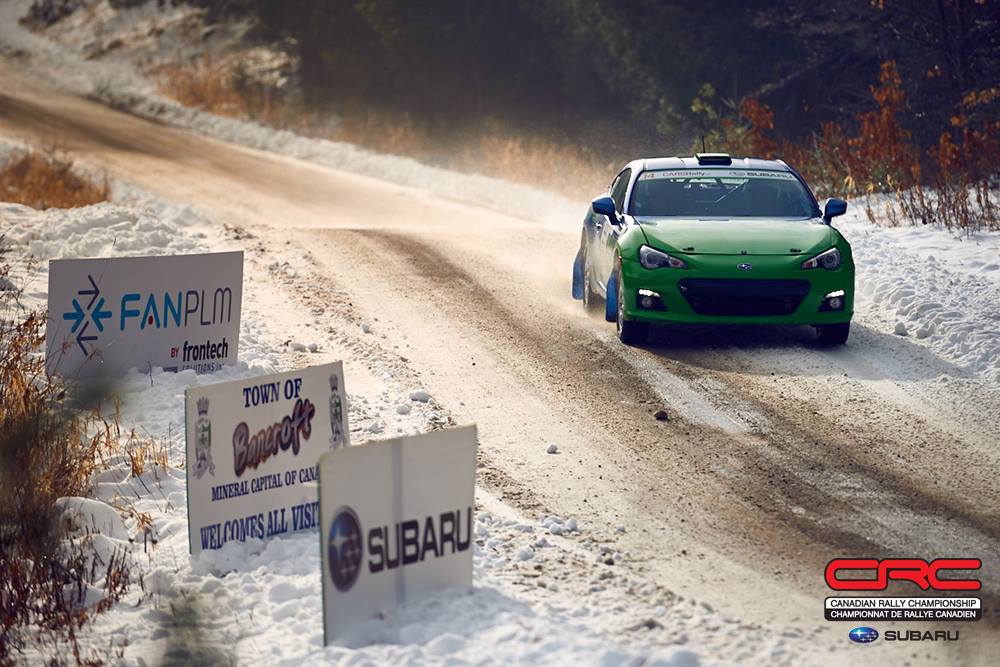 Be sure to follow the Canadian Rally Championship on social media @CRCRally, and tag your photos, videos or questions with #CRCRally

Photos are brought to the CRC team by Jason Nugent, www.demitas.se