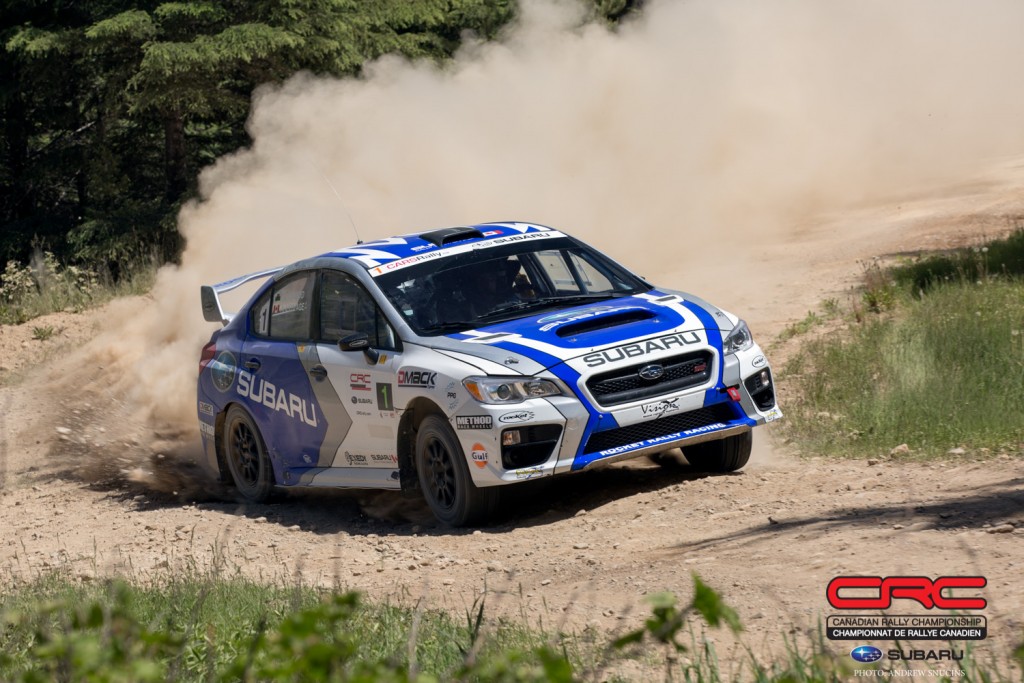 Dry and hot conditions at the 2016 Rocky Mountain Rally took a toll on the cars and crews racing on the mountain roads surrounding the host town of Invermere, B.C. Even some of the more experienced teams were caught out in the difficult conditions.

L’Estage and co-driver Darren Garrod took a lead in the morning, edging out Joel Levac and Stephanie Lewis. The Subaru Rally Team Canada crew opened their lead further on the early afternoon stages and then suddenly found themselves with a wide margin after Levac and Lewis had an off, ending their event.

“It’s been a good day for us,” said L’Estage. “We had to push really hard this morning to beat Joel. We kept pushing and now we’re in the best position possible for tomorrow.” 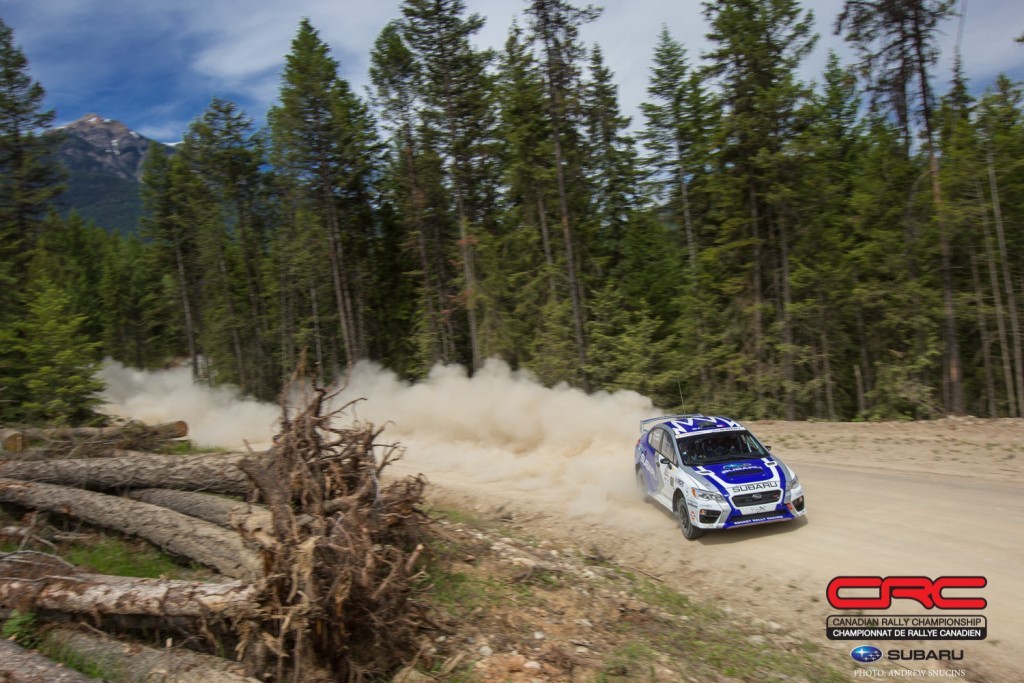 Levac and Lewis hit a tree after an incorrect note on the second loop of stages on Saturday.

“We had a flat tire on recce, and we were driving slowly while we were making our notes,” said Levac, who doesn’t have all of the necessary spare parts to fix the car and return to competition. “So when I made the note for that corner, I thought we could go faster, and I was wrong.” 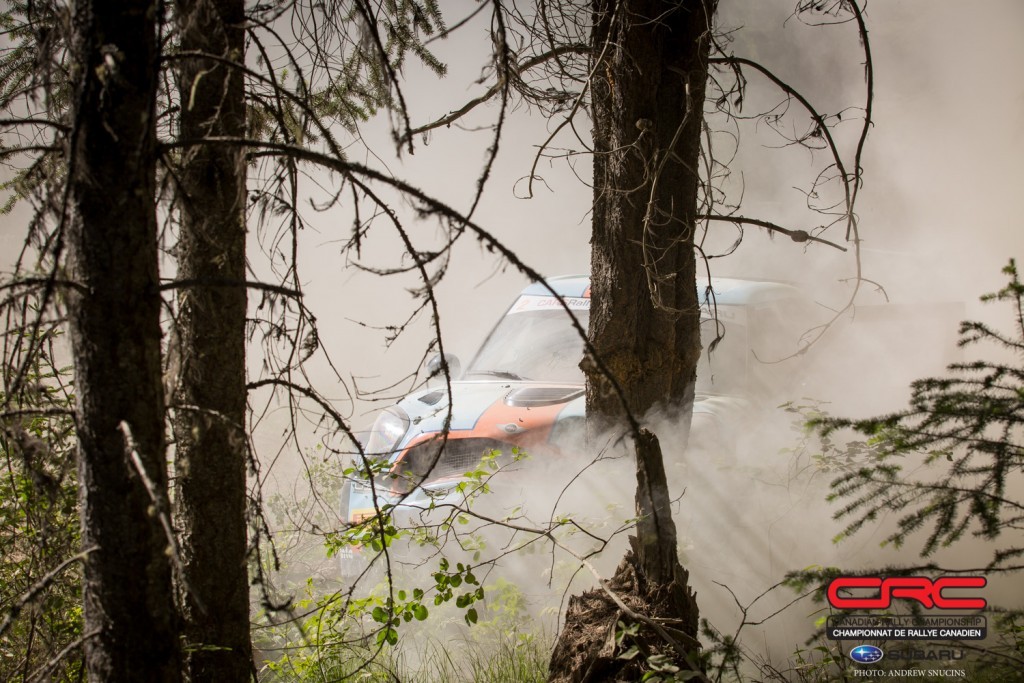 Alexandre Beland and Lyne Murphy were also struggling with technical problems through the day. Transmission and engine problems put the team through its paces both on the morning stages and then in the service park. Even after repairs, the car was still having problems, forcing Beland and Murphy to retire. However, they do hope to restart the rally on day two, and try to make up for lost ground.

Boris Djordjevic and Robin Chapelsky took over second place with a consistent drive. Even though the team had a relatively clean run, Djordjevic was clear about just how demanding the roads were today.

“It’s really hot, and dusty,” said Djordjevic. “That’s hard on the cars, but it’s also hard on the teams. Materials fatigue and people fatigue as well. The trick is to try to pick a pace that is safe and reliable, but still fast.” 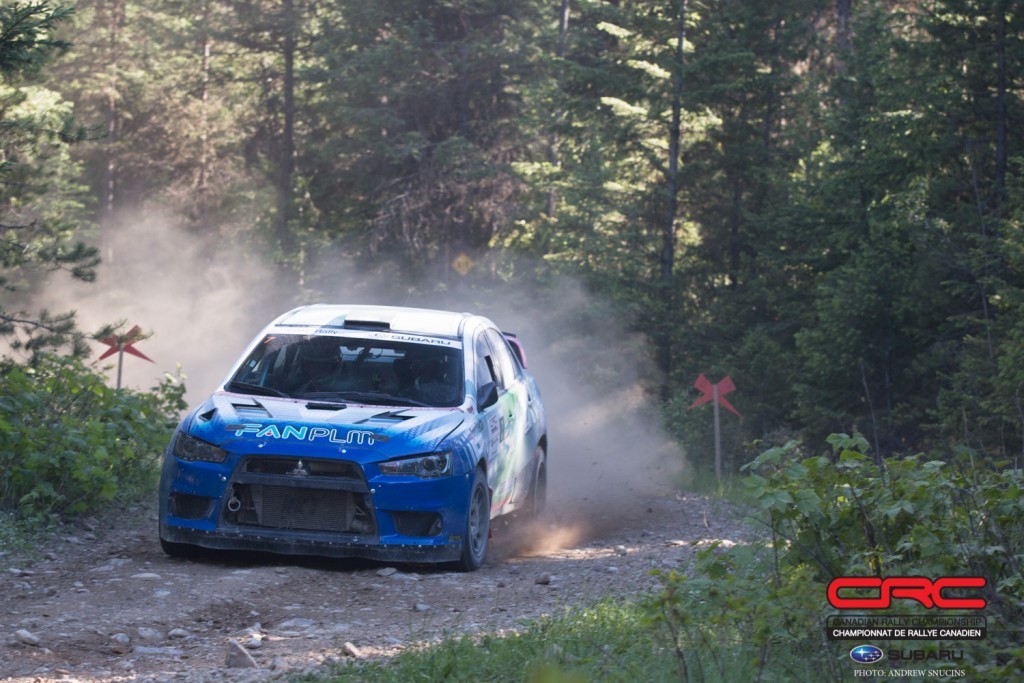 Heading into the second day, it appears that Djordjevic and Chapelsky are walking that fine line. Brandon Semenuk and John Hall persevered through a number of problems to finish the day in fourth place. Considering the difficulty the pair have had – loss of power to a boost leak, brake failure on the first loop of stages – the drive has been remarkable, and with a few repairs, the team hope to be running at full capabilities tomorrow.

Hardy Schmidtke and John Dillon put in a decent performance through the day, despite being down on power all day. A problem that arose during testing before the rally manifest as an overheating problem right from the very first stage. Schmidtke was forced to shut down many of the power-producing systems in the car to keep the engine at a temperature that might allow it to last. The crew are working through the night to replace the headgasket – the presumed culprit – before the start of racing on Sunday.

The top five has been rounded out by Maxime Labrie and Anick Barrette. The two won the Rallye Perce Neige and so are well positioned in the championship right now. But the team was not able to avoid problems. Immediately after the only service of the day, the team snapped a half-shaft, forcing the car to run in three-wheel-drive. 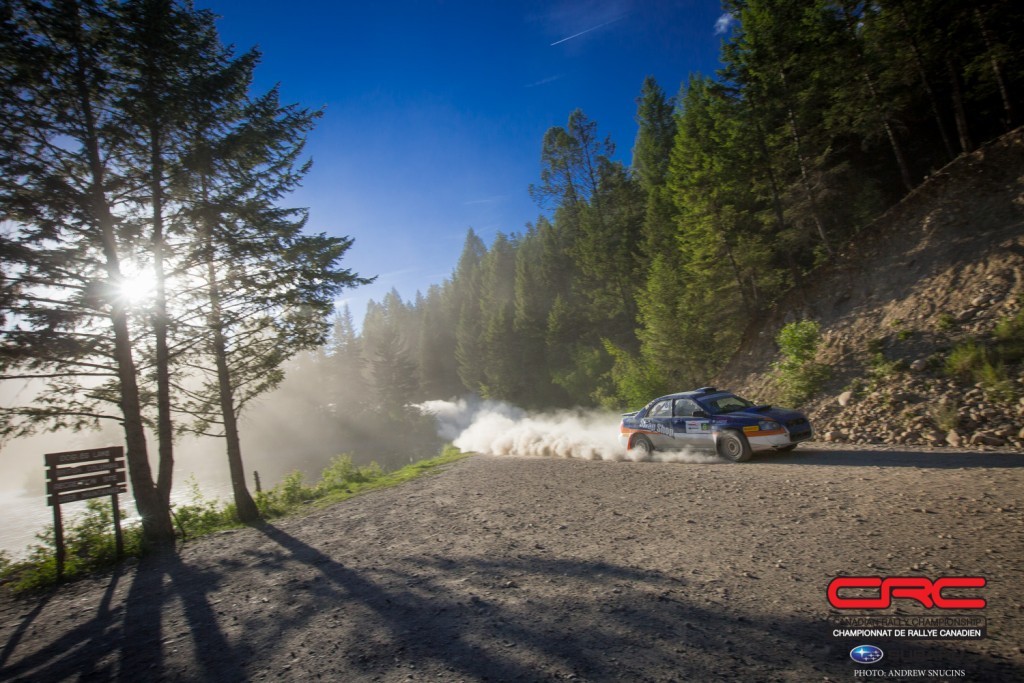 “The car became less predictable, less stable,” said Labrie. “We just had to be careful to not make costly mistakes, but we lost a lot of time, maybe 30 seconds or more on each stage.”

In fact, the team were able to stay closer on certain stages, but suffered bigger losses on others, dropping from a podium spot to end the day in fifth. However, along with Schmidtke and Semenuk, a battle for third place is shaping up for Sunday, the final day of the Rocky Mountain Rally. 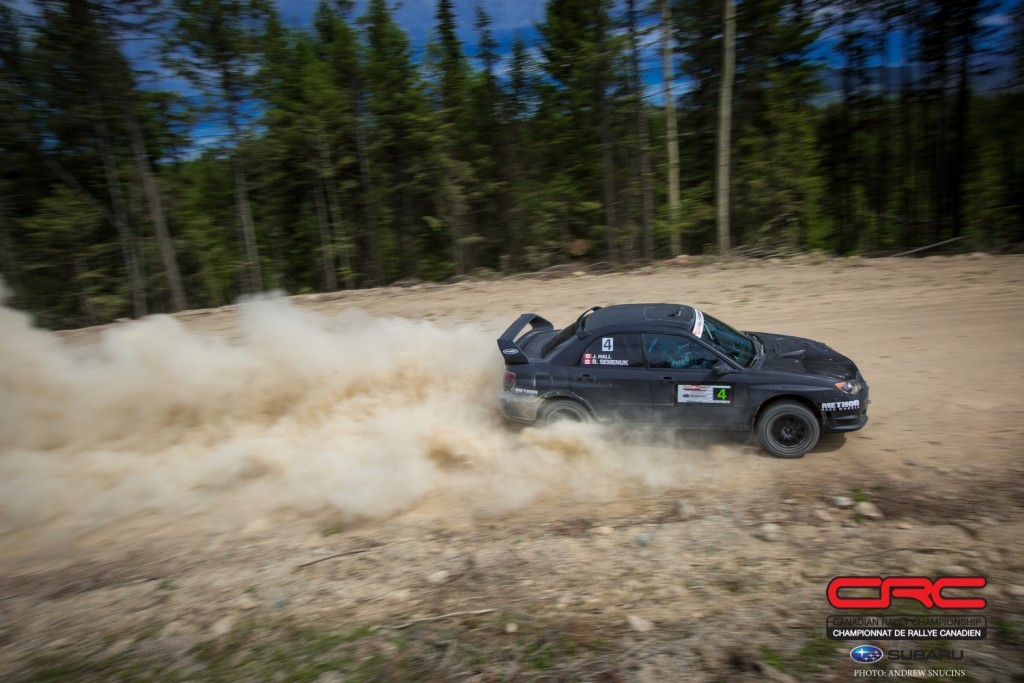 In two-wheel-drive, similar stories played out for many of the top teams. Tanveer Deen and Michael Szewczyk went off the road on the very first stage, and while they restarted partway through the day, the pair have their work cut out if they want to win the class.

The big surprise in two-wheel-drive is the very fast pace set by brothers Jan and Jody Zedril. Absent from rallying for much of the last few years, the Winnipeg-based team were almost immediately up to speed on the first day of racing.

“Jody told me to take it easy and get the feeling for the car again,” said Jan, at the end of the first day. “But after the first few corners, I knew I was already there. I didn’t need to find the feeling, because it never seemed to have left.” 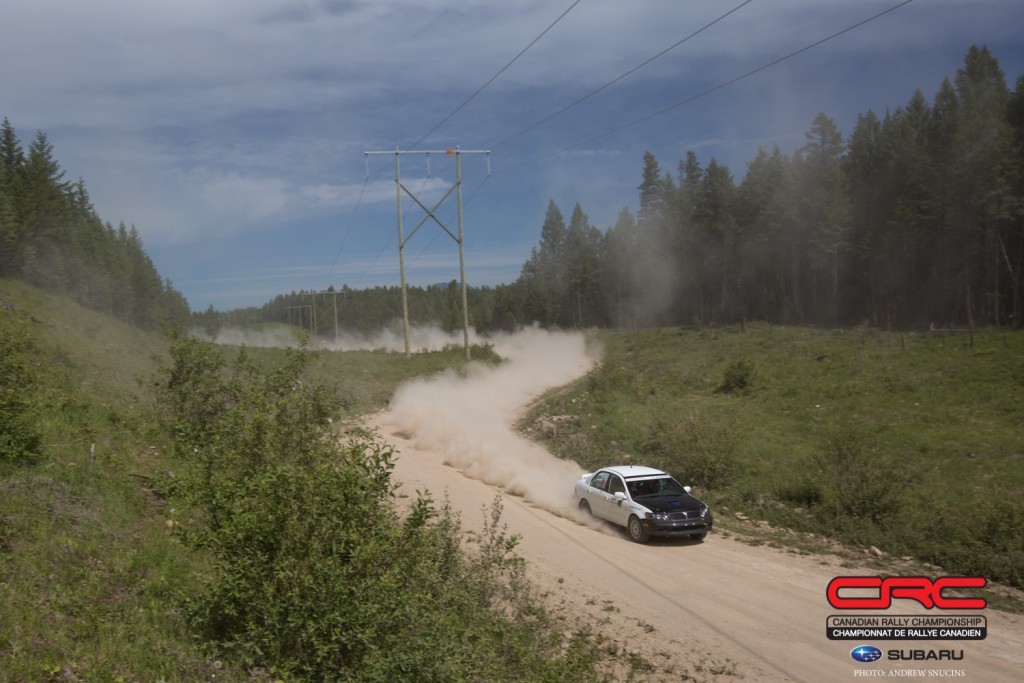 Dave Clark and Jennifer Daly struggled with overheating problems in the morning and were forced to retire with engine problems during the afternoon stages. Graham Bruce and Martin Burnley were sidelined with a leaking oil line. The silver lining for the team is that the leak occurred just as they arrived at service, so no lasting damage appears to have happened to their Porsche. 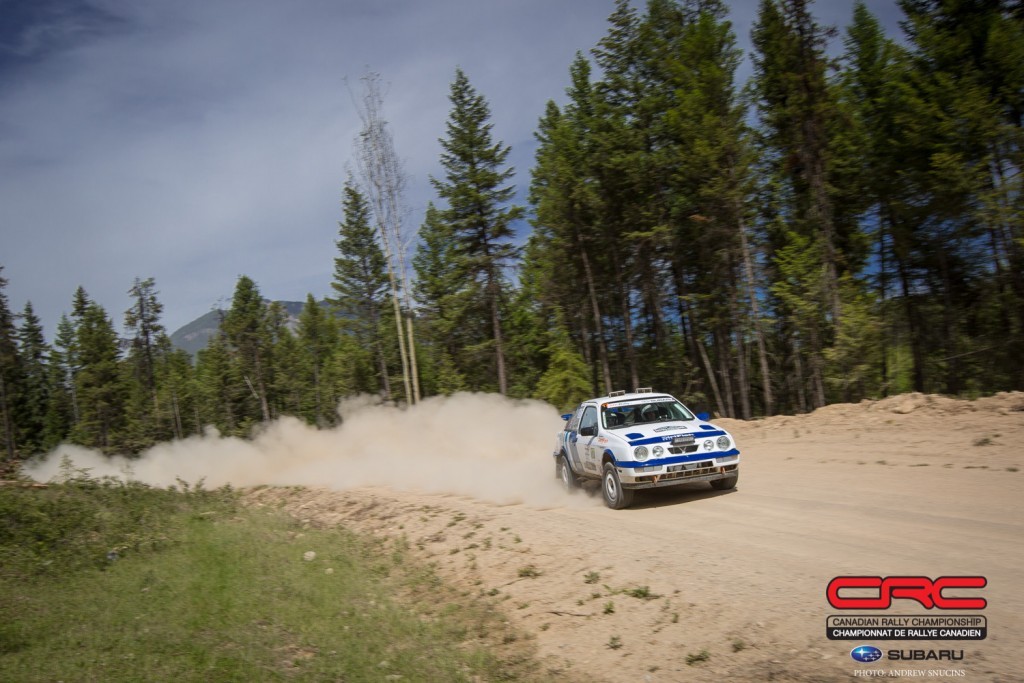 Voytek Stywryszko and Peter Brook have taken second in class, while Deen and Szewczyk have climbed back into a distant third in class.

Teams will race on the infamous Hawke stage complex on Sunday before closing the books on the 2016 Rocky Mountain Rally. The weather forecast calls for more of the same – hot and dry – so teams will need to be mindful of just how challenging those conditions will be on both cars and crew. 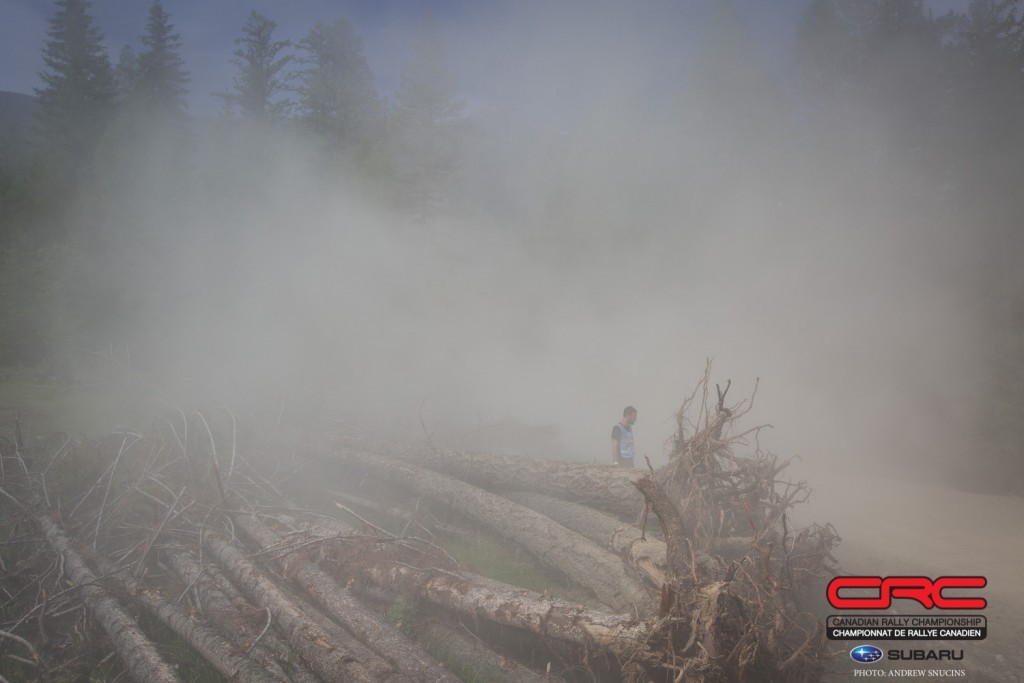 Be sure to follow @CRCRally on Instagram to stay up to date on all the news from Invermere. 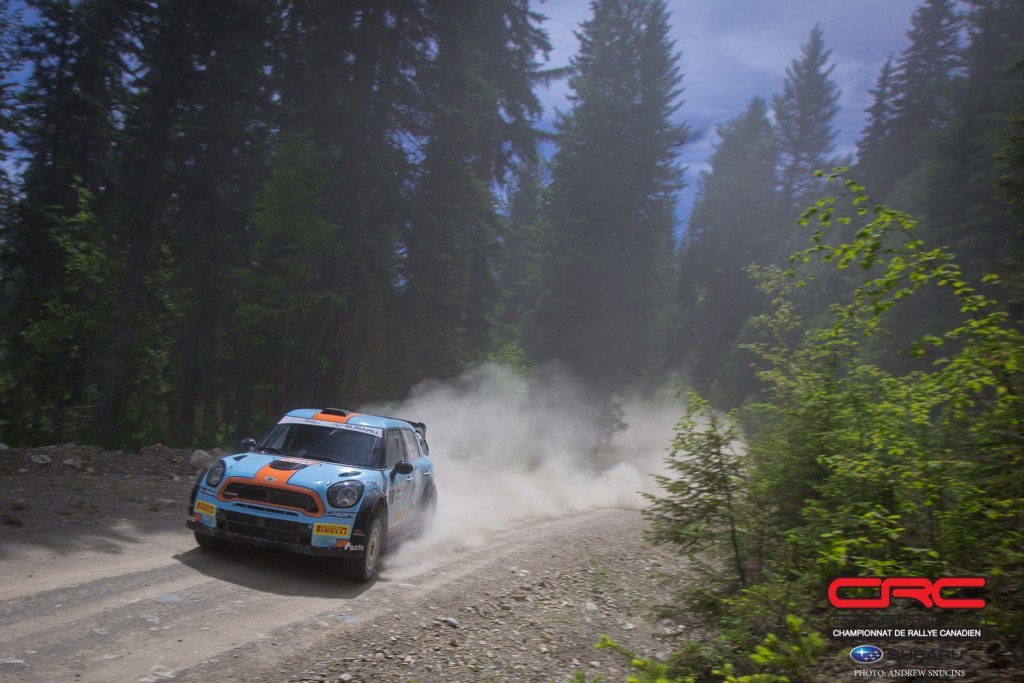 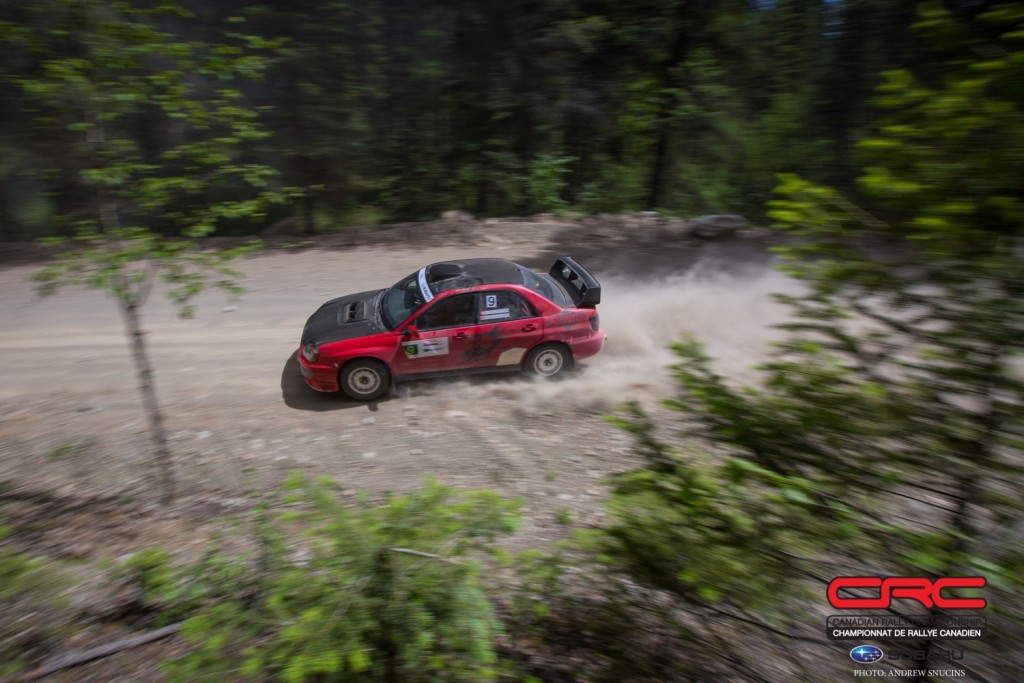 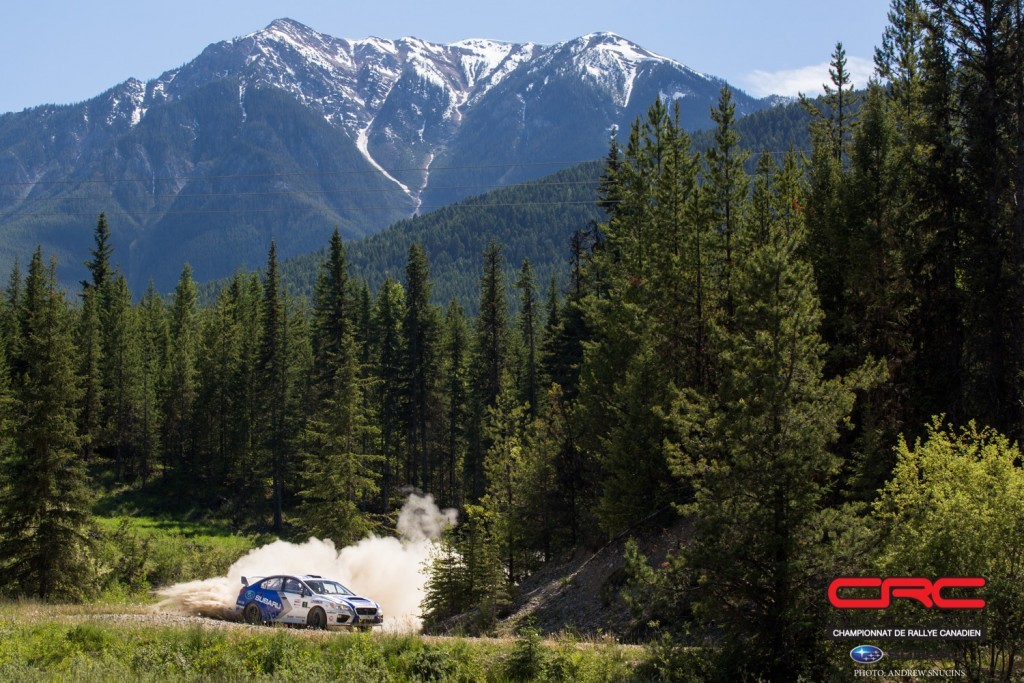 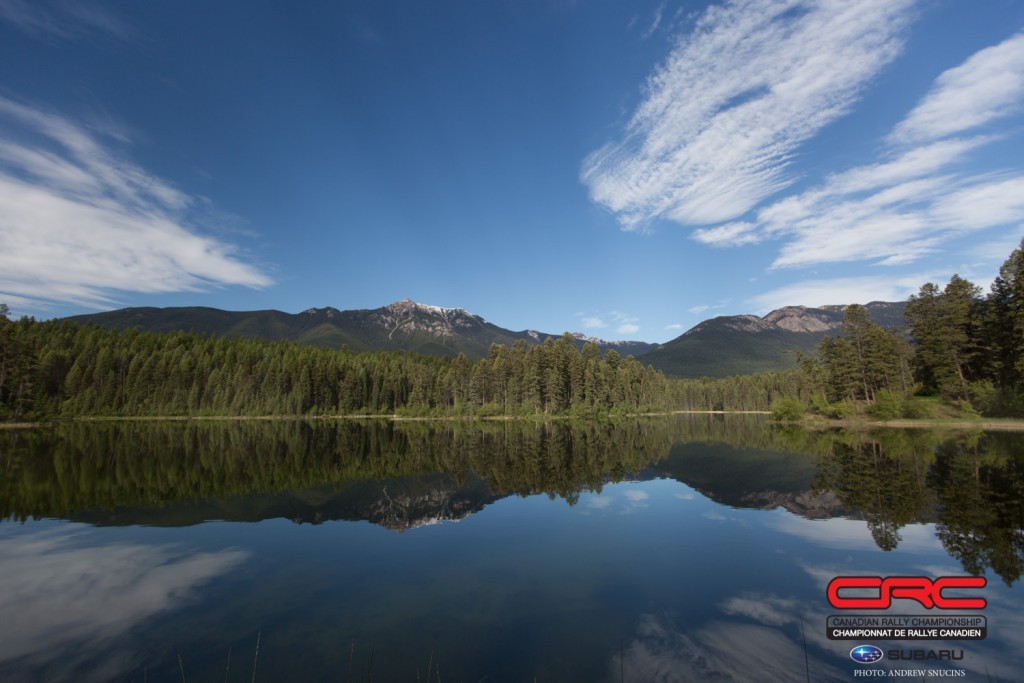