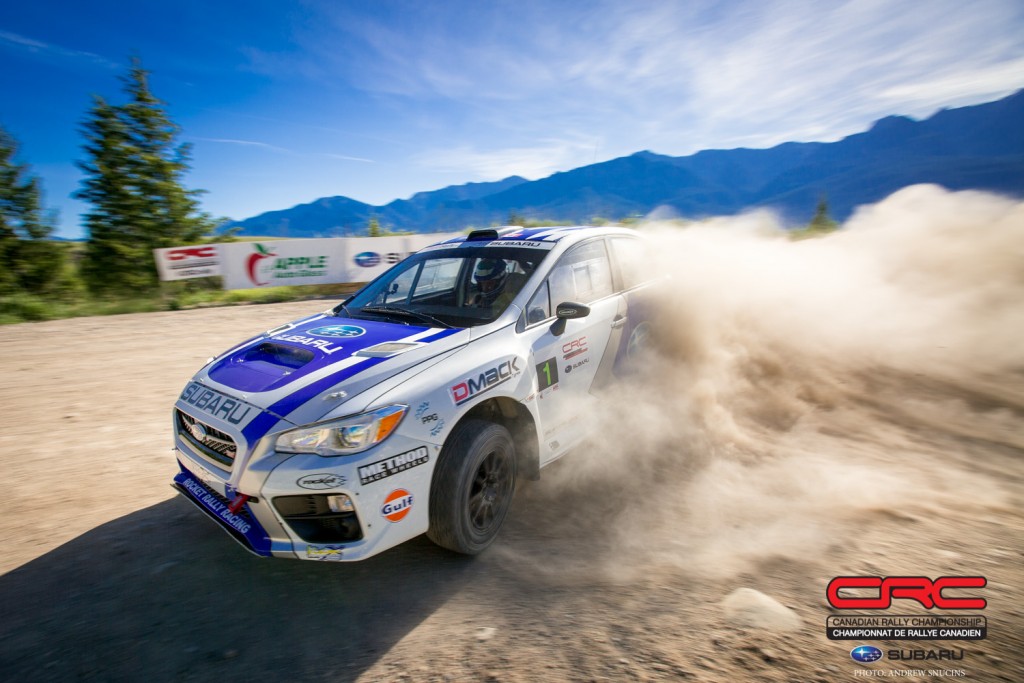 Antoine L’Estage and Darren Garrod of Subaru Rally Team Canada drove to victory at the 2016 Rocky Mountain Rally, in Invermere, B.C., going uncontested through the second day of competition. The win is the first for the team this season, after mechanical problems forced the team to retire from the season opener, the Rallye Perce Neige. Winning Rocky secures maximum points for both driver and co-driver, as well as for Subaru, in the manufacturer’s cup.

“This weekend has been really great,” said L’Estage. We had no issues at all with the car, the notes were perfect, our new tires had great grip, and the whole team at Rocket Rally did a great job to help us get to the finish in first place.” 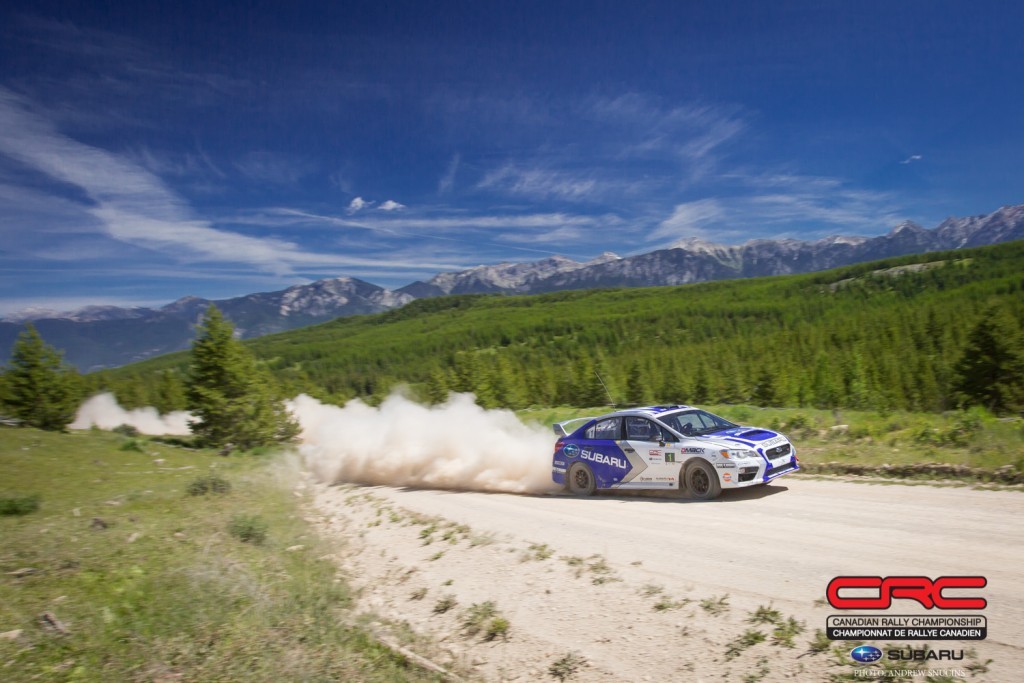 The event is also a personal achievement for L’Estage, who notched his 44th career victory. No other driver in Canadian rally history has been so successful. In setting the new record, L’Estage beat the record set by long-time mentor John Buffum.

Boris Djordjevic and Robin Chapelsky sustained a fast pace without having so many of the problems that plagued the competition. The challenge over the last year has been in the development of the car that was purchased from L’Estage. While some small changes still need to be made, it appears the team have found a formula that works well. 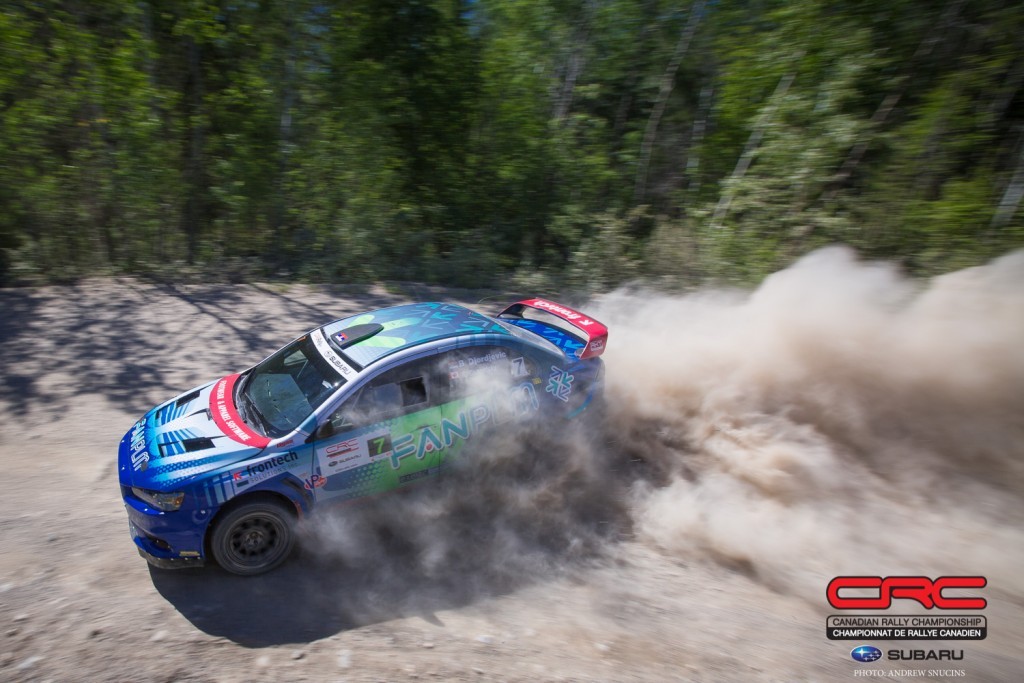 “We had a few problems today with the brakes overheating on the downhill stages, but the car has run really well all weekend,” said Djordjevic. “We had really good competition from some of the other teams, especially on the first day, and then found a pace where we didn’t have to take big chances, but could hold off the others.”

A battle had been brewing for the final podium spot late on Saturday, and continued into Sunday. Brandon Semenuk and John Hall were pushing their car to the limit in an effort to make up for a lack of power. The car had been down on power all rally, and was especially challenging to drive on the uphill stages on Sunday. On the final downhill Hawke stage, Semenuk and Hall posted a time just four seconds back from L’Estage. 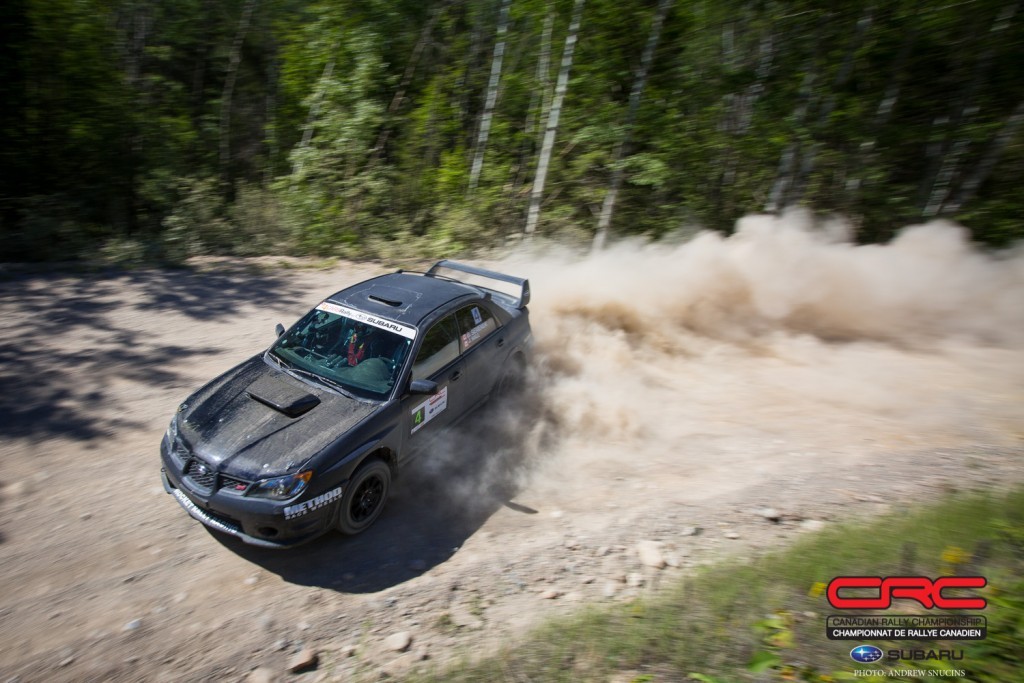 “The car just has no power,” said Semenuk. “It’s not a full race engine to start with, but there’s something wrong that makes it much less powerful than it should be. I tried to drive hard enough that we could capitalize if anyone had problems without taking big risks. I’m really stoked to have finished third.” 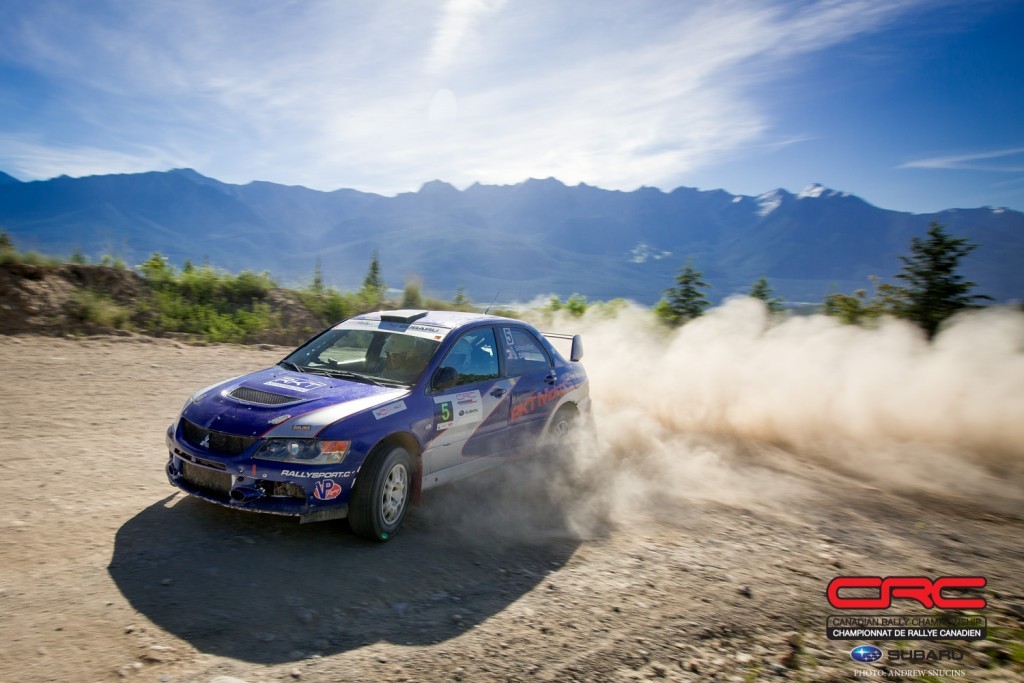 Maxime Labrie and Anick Barrette have retained the championship lead, having finished fourth overall. The pair had never been to this event and wrote fresh notes during recce. However, Labrie confirmed that they would have been faster with better notes.

“We made our own notes, and they were good, but not great,” said Labrie. “You can get faster when you are able to refine your notes year after year. Our notes are maybe 90% of what they could be, but the only way to make them better is to do this event each year and refine our notes.”

The pair will enter the Rallye Baie des Chaleurs in one month as leaders of the championship, but will have a tough task in holding on to that title in what is sure to be strong competition.

The Zedril brothers – Jan and Jody – have not competed in the Canadian Rally Championship in nearly five years, but clearly haven’t lost their touch. Quickly, the pair were setting good stage times, and stayed out of trouble that seemed to decimate the rest of their field, driving to a class victory. 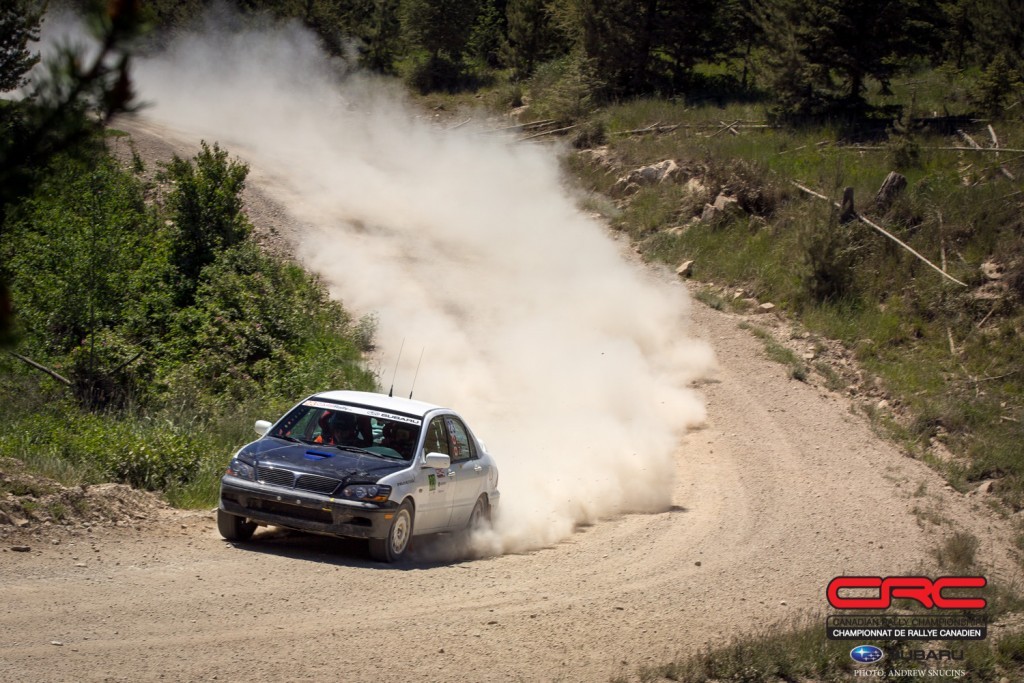 “We’re so happy with how things went this weekend,” said Jan. “It was a perfect result, and we’re thrilled to do so well after being away this long. We’re playing this season a bit by ear, but we really enjoyed being back in competition.” 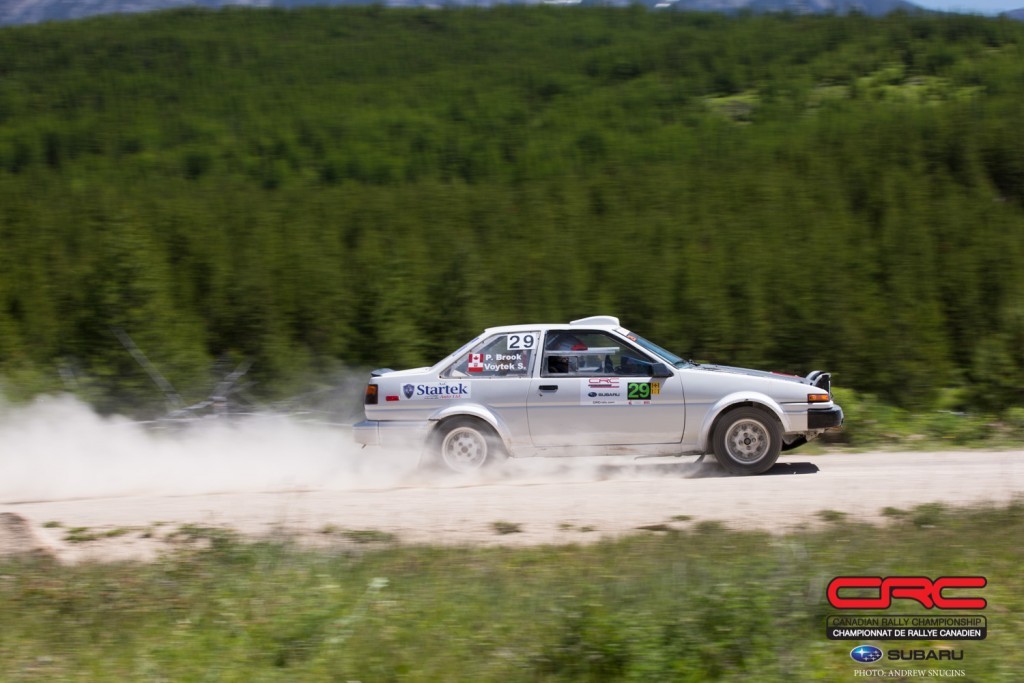 Second place went to Voytek Stywryszko and Peter Brook. The team finished on the podium here last year, and clearly benefit from knowledge of the roads. The team setting some of the most blistering times in two-wheel-drive was Tanveer Deen and Michael Szewczyk. It was a remarkable performance, but the team struggle with consistency, crashing out on the first stage. While the team was able to restart, they took heavy penalties and were unable to climb any higher than third in class. 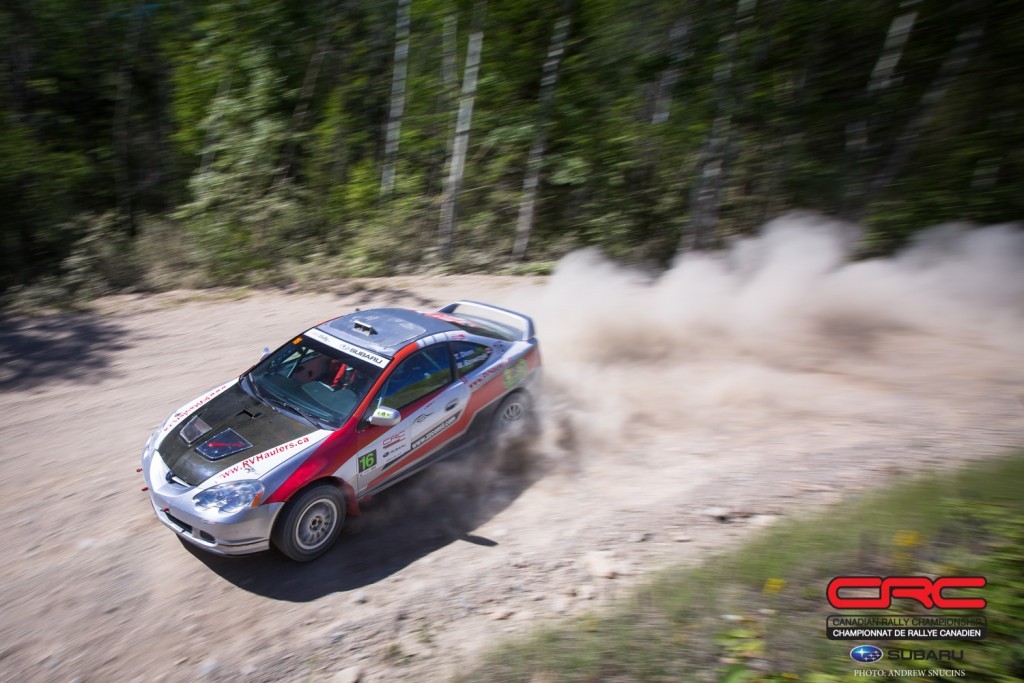 The weather remained much as it had been on Saturday, with dry, hot, and dusty conditions wearing on teams and equipment. Despite the challenges, teams were thrilled with the more favourable conditions. Last year’s event – held in November – was cut short after ice and snow forced organizers to cut the final stages. The change of date has also produced a promising change in conditions. 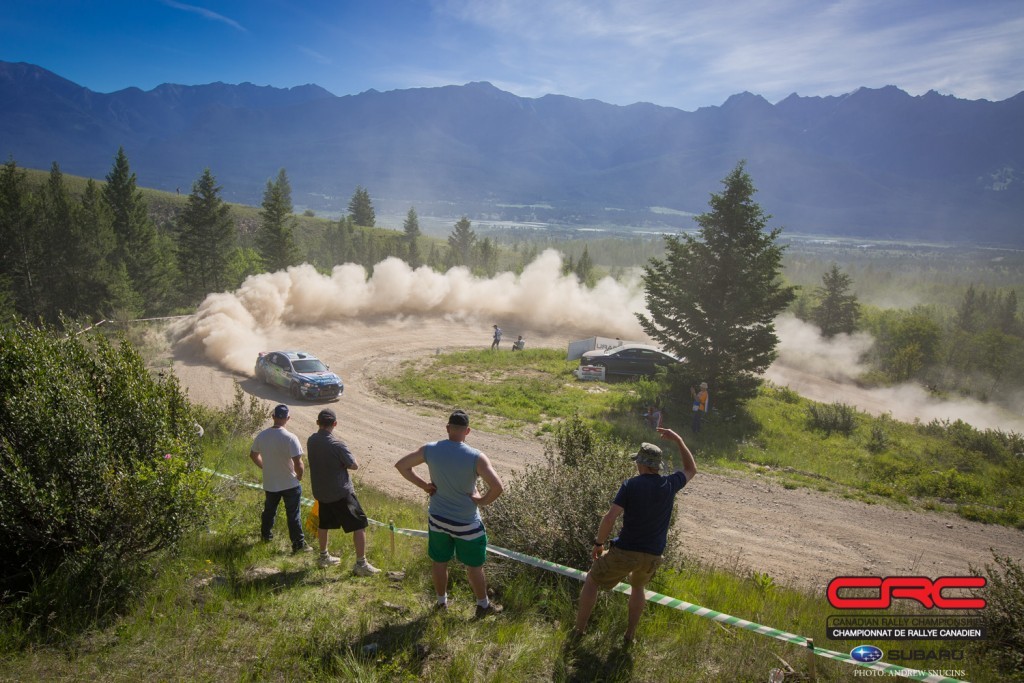 The Canadian Rally Championship continues next month with the Rallye Baie-des-Chaleurs, in New Richmond, Quebec. It is one of the longest rallies in Canada and includes the largest jump in North America, and some of the most ardent rallying fans in the nation. 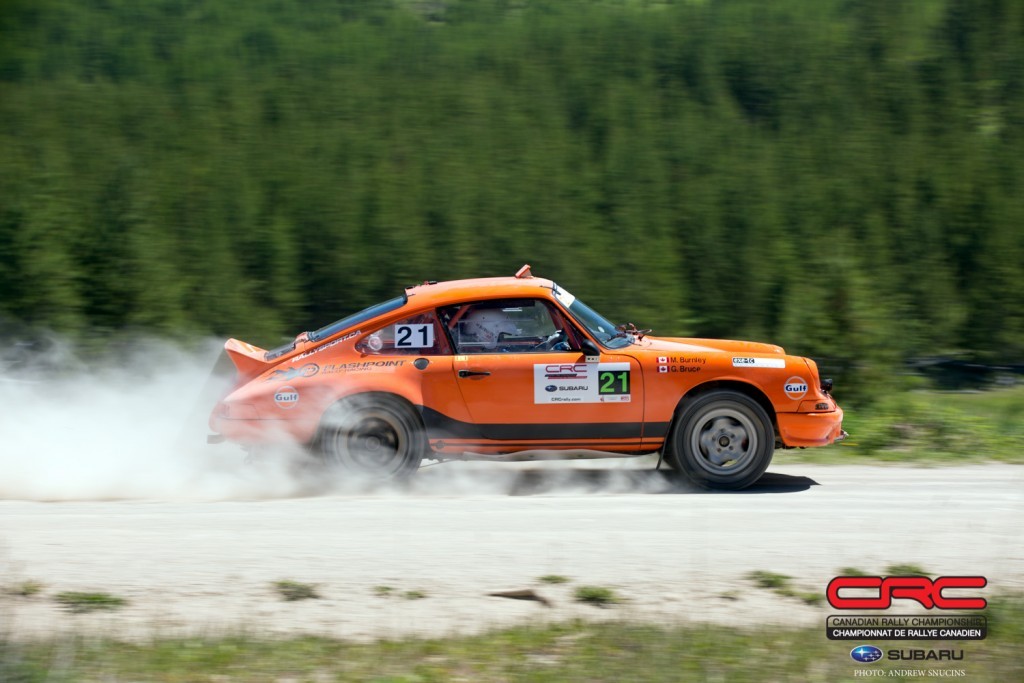 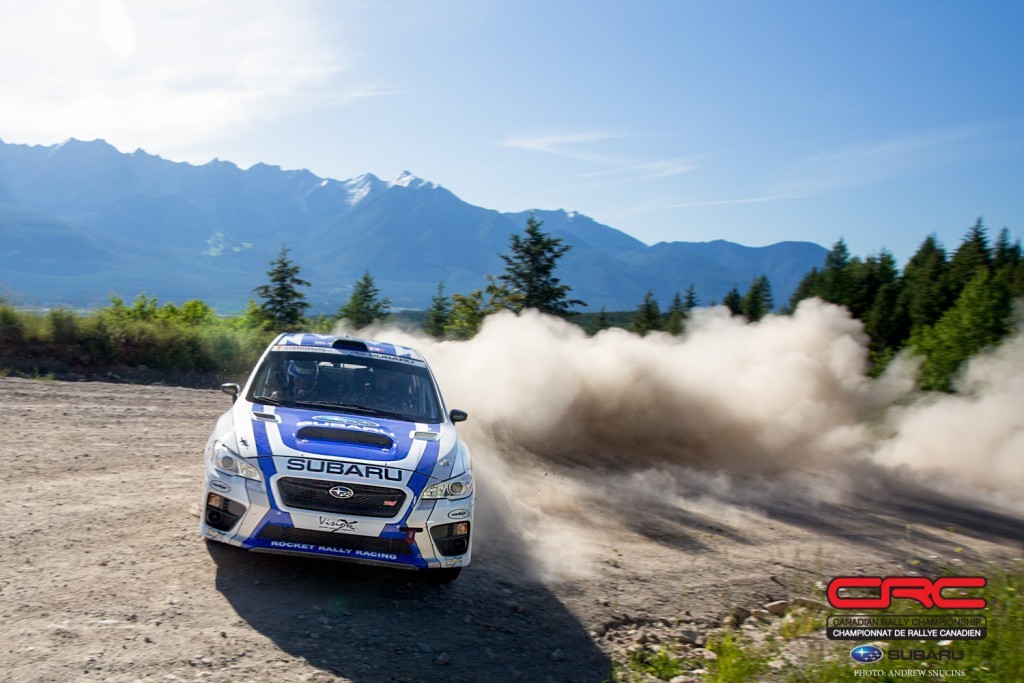 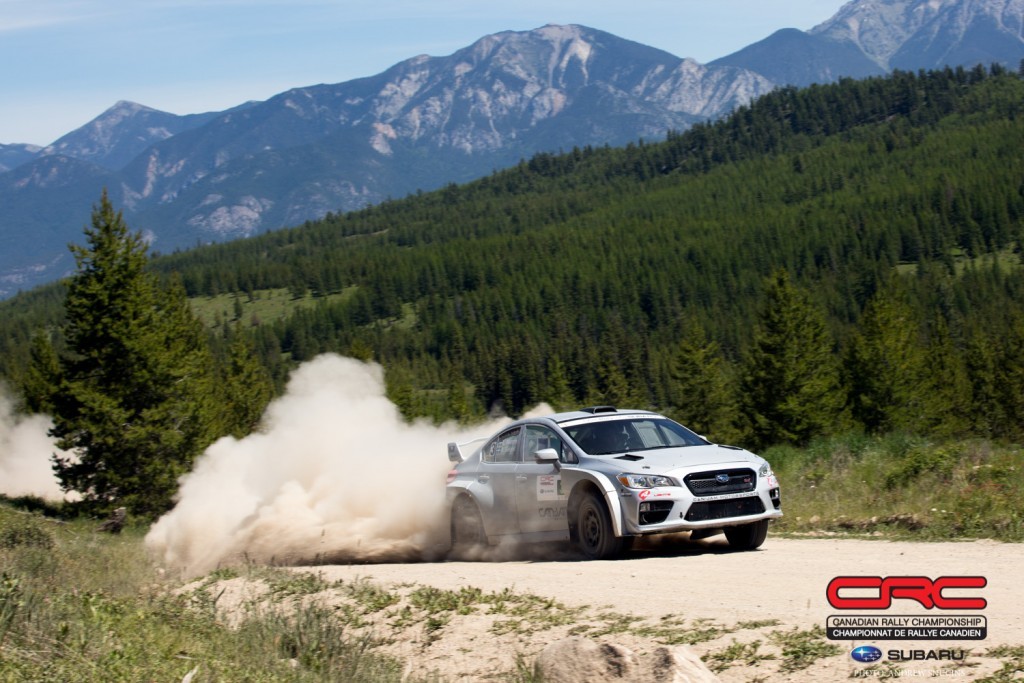 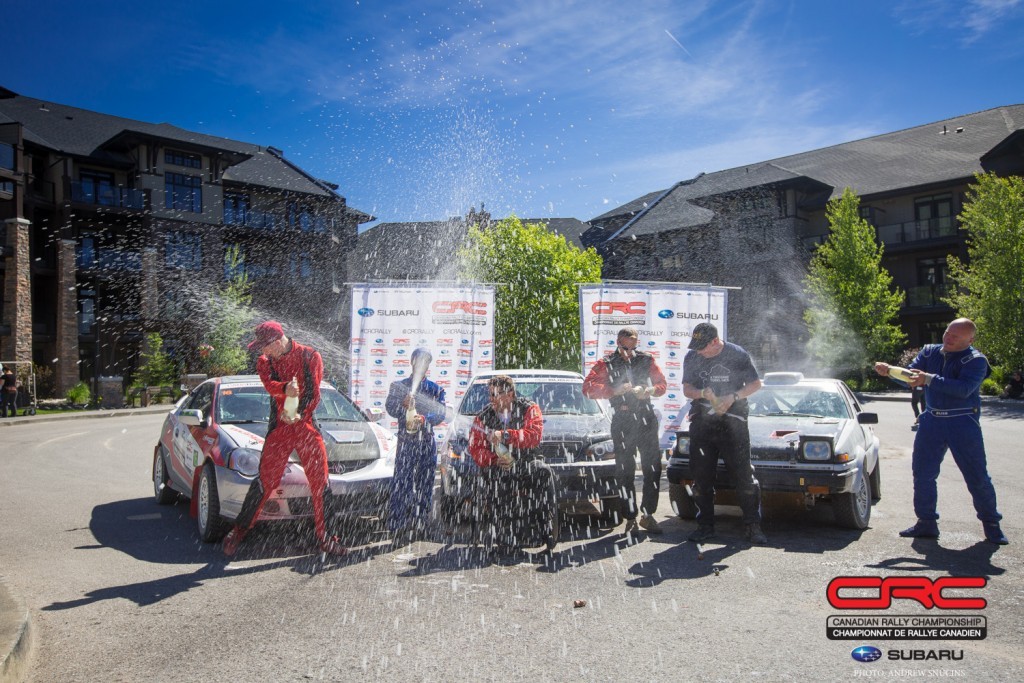 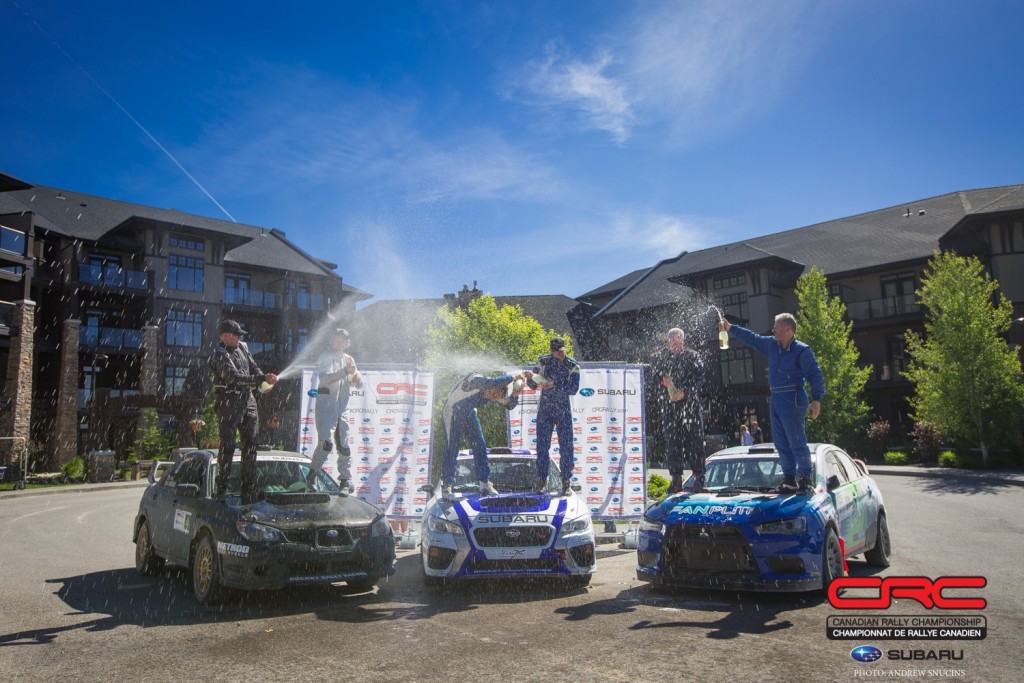