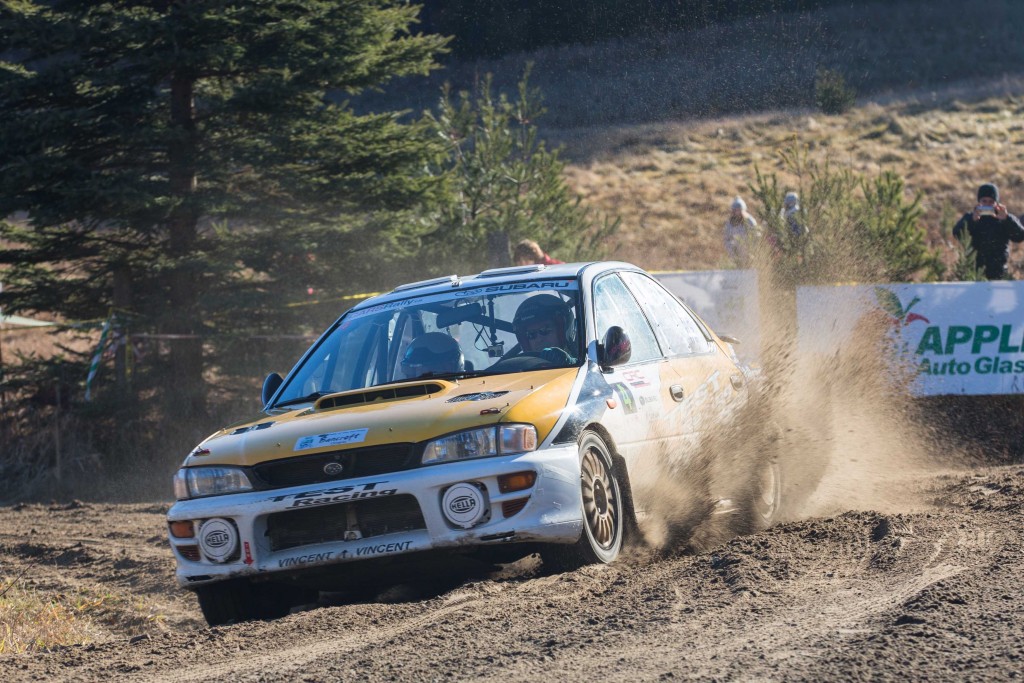 Bancroft, ON., November 29, 2015 – Sylvain and son Simon Vincent of Terrebonne, QC., won the Rally of the Tall Pines, the final round of the Canadian Rally Championship. After a long career in the sport and numerous podium finishes, Sylvain had earned the rank of Grand Master though a national victory had eluded the driver for his entire career.

The team drove a consistent pace, and took over the lead early in the rally after running in second place through the morning stages.

“It happened so many times that we were close, finishing second, but I never had a victory,” said Vincent, who decided to retire from the sport after this event. “I’ve always said that this rally is the toughest rally. For me, it is very physically demanding, but I really like the roads, so it balances out. But after a rally like this, you’re exhausted.

“On the 31km stage, I really wanted to push so that I could hold off the other drivers so that was my plan. We had great battles through the day and it was really great to experience that for my first win.”

Brandon Semenuk (Squamish, BC) excelled on the technical forest roads in his first ever Rally of the Tall Pines. Teamed with co-driver John Hall (Sherwood Park, AB), Semenuk had never rallied in eastern Canada, and had yet to finish on a national podium.

“This has been a crazy rally,” said Semenuk, who is a world reknowned freeride mountain bike rider. “13 hours long, the most stages I have done in a day, and the last two sets of stages were some of the craziest I have ever driven. They had so many jumps and hidden corners behind crests.”

“John obviously did a great job because we made it to the end of the rally and finished second place. He’s done this rally five times, so his experience helped us out a ton.”

Another newcomer to the national podium was the pairing of Jeremy Norris (Kitchener, ON) and Jeff Hagan (Leamington, ON). Norris made his rally debut at Tall Pines five years ago, and overcame problems this year to finish third overall. A lack of turbo boost at mid day forced the team to take time penalties while making repairs. Once back on the road, they pushed incredibly hard to make up time and positions in the standings.

“I’ve had so many highs and lows today,” said Norris. “Things were great this morning, when we were third overall, but then we had boost problems and lost a lot of time. Recovering from that and climbing back up the order, it’s been an amazing day.”

Simon Dubé (Jonquiere, QC) closed out his season with a victory in the two wheel drive class, with the help of co-driver Eric Lachance (St-Bruno-Lac-St-Jean, QC). Dubé has had mixed fortunes in the past at this rally, but had only minor problems this year. A flat tire on one stage forced the team to slow their pace, losing just a few seconds from an otherwise near-flawless performance.

“It’s been a hard day, especially the last three stages because I saw starting to feel sick,” said Dubé. “I’ve won the two wheel drive championship again, and finished sixth overall, so I am incredibly happy. It’s been an incredible season, and the whole team has been really supportive all year.”

The Rally of the Tall Pines marks the end of the 2015 Canadian Rally Championship calendar. Snaking along forestry roads in the heart of the Canadian Shield, the 2015 edition demanded the utmost from every team on the start list. Rain on the day before the event soaked the roads which in turn became a mix of gravel and ice when overnight temperatures dropped well below freezing before the start of the rally. While grip was mostly good on the sandpaper-like roads, some locations were slick with mud. In these unpredictable conditions, some teams were caught out, ending their rally early. The rally route totalled nearly 200 kilometres of competitive stages.