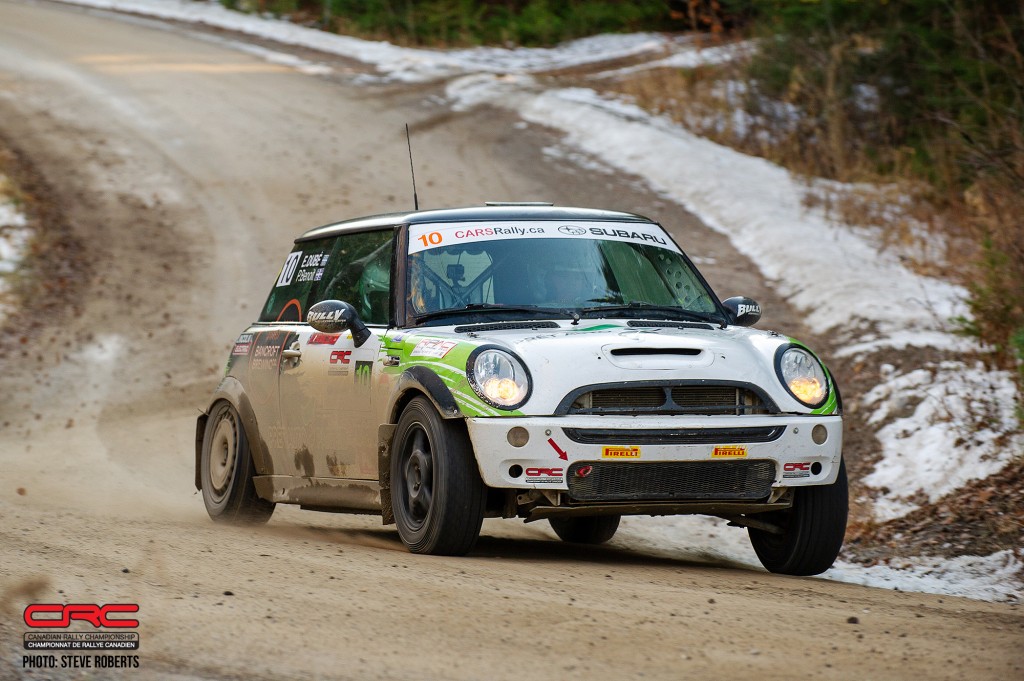 Philippe Benoît and Éric Dubé Win the Rally of the Tall Pines !

November 25, 2019.- This past weekend, as part of the Rally of the Tall Pines in Bancroft, Ontario, the 2019 season of the Eastern Canadian Rally Championship (ECRC) concluded.  The event was highlighted by the achievement of Quebeckers Philippe Benoît and Éric Dubé, who were the fastest overall with their two-wheel drive Mini Cooper !  This was the first time in the history of the ECRC that a 2WD vehicle has landed in the top spot of the overall podium.

At the Rally of the Tall Pines this past weekend, Philippe Benoît and Éric Dubé were unbeatable, leading the ECRC standings from beginning to end in a decisive victory with a lead of one minute and 49 seconds over Ontarians Jeremy and Benjamin Drake, rookies this rally season in their Subaru 2.5 RS.

On the tricky and classic Rally of the Tall Pines roads, sometimes with a thin layer of ice and sometimes mud covering of the gravel, winning in a 2-wheel drive car was not an easy feat for Benoît and Dubé.

Another surprise was that of third place finishers Americans Sean Burke and Nathan Werner. Hailing from Pennsylvania, they overcame all the challenges this event had to offer and drove their Honda CRX to an overall podium finish and a second place in 2-wheel drive.

Three teams driving Subaru WRX STIs finished in the Top 6.  In fourth place, Ontarians Curtis Antoine and David Bell also won Production 4-wheel drive, ahead of the only female driver, American Margaret Sharron, in 4-wheel drive Open car, co-driven by Vincent Landreville.   Matthew Ballinger, co-driven by Gary Sutherland during this event, drove his WRX Production 4WD to sixth place overall.  These points allow him to jump to top spot in the championship and claim the 2019 ECRC driver’s title.  Ballinger was in second place, one point behind the leader prior to this rally.  He is the first Ontarian driver to claim the ECRC title in the five years since the inception of the series.

Jim Stevens/Brandon Pace (Production two-wheel drive Suzuki Swift) and Sébastien Clark/Ian Guité (Subaru WRX STI) rounded out the 8 ECRC-registered teams that completed the event.  Clark/Guité’s final standings do not reflect their expectations from the day but a small accident early in the rally relegated them far down the leaderboard.

With his first place finish at the Rally of the Tall Pines this weekend, Philippe Benoît joins David Bérubé in second place of the overall 2019 championship standings behind Matthew Ballinger, who won the Black Bear Rally earlier this season.  Sébastien Clark and André Leblanc complete the Top 5.  In the co-drivers’ overall standings, Marilou Leblanc is champion, one point ahead of Bruce Leonard. Éric Dubé finishes in third place, ahead of René Leblanc and Yanick Marin.

The Eastern Canadian Rally Championship (ECRC) is comprised of eight events, spread out between Ontario, Quebec, and the Maritime provinces.  The 2020 season will kick off on February 1st with the Rallye Perce-Neige, in Maniwaki (Québec).