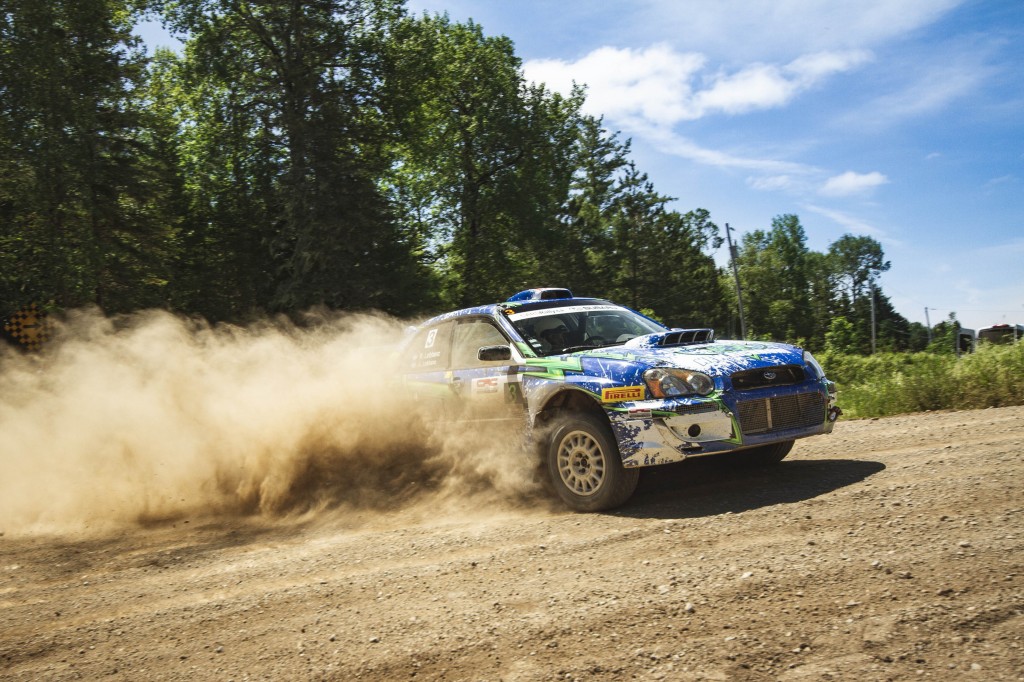 July 4 2021.- After a seventeen-month break, the Eastern Canadian Rally Championship (ECRC) restarted this past weekend with its very first round of the 2021 season, the Rallye Baie-des-Chaleurs, in the Gaspé region of Queebec. This rally was a long-awaited return to competition for all tams registered in the event’s different series and categories.

In ECRC, local favourites André and René Leblanc dominated the event at the wheel of a Subaru WRX STI prepared by Four Star Motorsports and multi-time Canadian champion Sprongl brothers. In the lead for the entire duration of the nine competitive stages making up the ECRC section of the event, they claimed victory by a margin of three minutes and twenty-nine seconds.

Jérôme Mailloux and Philippe Poirier finished in second place with their Subaru WRX STI, prepared by the two-time Canadian rally championship winning Test Racing. The duo quickly found themselves in second place and after a problem-free race, they finished ahead of rookies Gabriel Monette and François Rioux, also driving a Subaru. Monette/Rioux earned their very first ECRC podium and will surely be a team to watch. Behind them by just six seconds was the other Test Racing team of Alexandre Garceau and Matthieu Toupin.

Réjean Perron and Alexandre Marcoux rounded out the Top 5 with their Mitsubishi Lancer Evolution 10, ahead of rookie team Simon Aubé and Gabrielle St-Jacques (Subaru). They finished in front of Jean-Philippe Courchesne, co-driven by the experienced Patrick Lévesque. At the helm of a BMW 318Ti, the young Courchesne had a strong finish in a rally known for its challenges and Courchesne/Lévesque win the 2-wheel drive class.

Alexandre Moreau and Ian Guité (Subaru WRX STI) experienced a more complicated event and had to settle for 8th place. Nevertheless, this team recorded quick times and will no doubt have an impact in future rallies.

The Top 10 of this inaugural round of the 2021 season was rounded out by the winners in the Production Two-Wheel Drive class, Éric Dufour and Denis Pesant in a Volkswagen Golf GTI, followed by Pascal Besse and Nicolas Tousignant, of Charlevoix, in a 1979 2WD Porsche 911 SC.  Hans Larose and Alexandre Pesant (VW Golf GTI) completed the 2WD class, finishing eleventh overall in the ECRC standings.

Mathieu Leblanc and Éric Dubé, had an impressive finish in their Honda Civic.  This duo from the Gaspé region were leaders in their class midway through the event and cracked the Top 3 overall before having to retire due to mechanical issues.

The Eastern Canadian Rally Championship (ECRC) consists of six events this season, spread out between Ontario, Quebec.  The next round will be the Black Bear Rally, held in the Gilmour region of Ontario, on August 7th.

The 2021 Rallye Baie-des-Chaleurs also counts towards the North American Rally Cup and the Canadian Rally Championship.  The Quebec team of Joël Levac and Laurence-Fanny L’Estage earned the overall victory in both of those series, driving a WRC Mini Countryman.