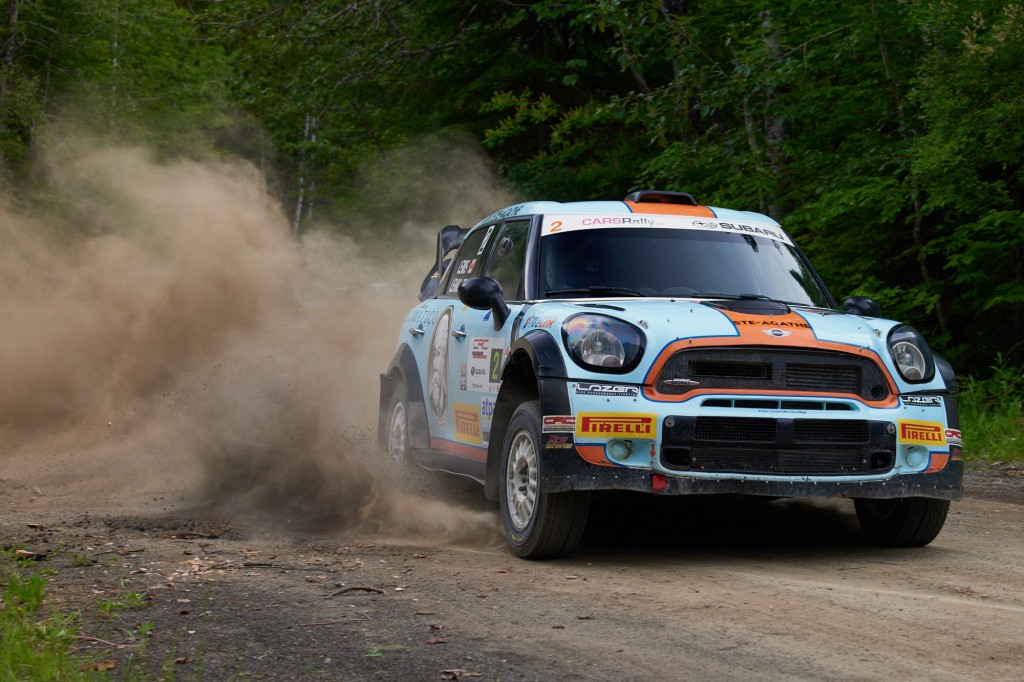 Joel Levac and Stephanie Lewis had a near flawless run to the top step of the podium at Rallye Baie des Chaleurs, in New Richmond, Quebec, the third round of the Canadian Rally Championship. The team built a good lead over the first day of racing, extending their winning margin to three minutes, 10.1 seconds by the end of the rally.

“We didn’t take any chances today, and just drove a normal pace today,” said Levac. “We have a great time together in the car, and the work Stephanie and I do together is how we can win a rally here.”

The team had very little in the way of difficulty, though a minor malfunction a fuel pump on day one ensured their service crew had more to do than the most basic checks. The team is considering heading to the next round of the championship, Rallye Defi, provided the car checks out after this victory. 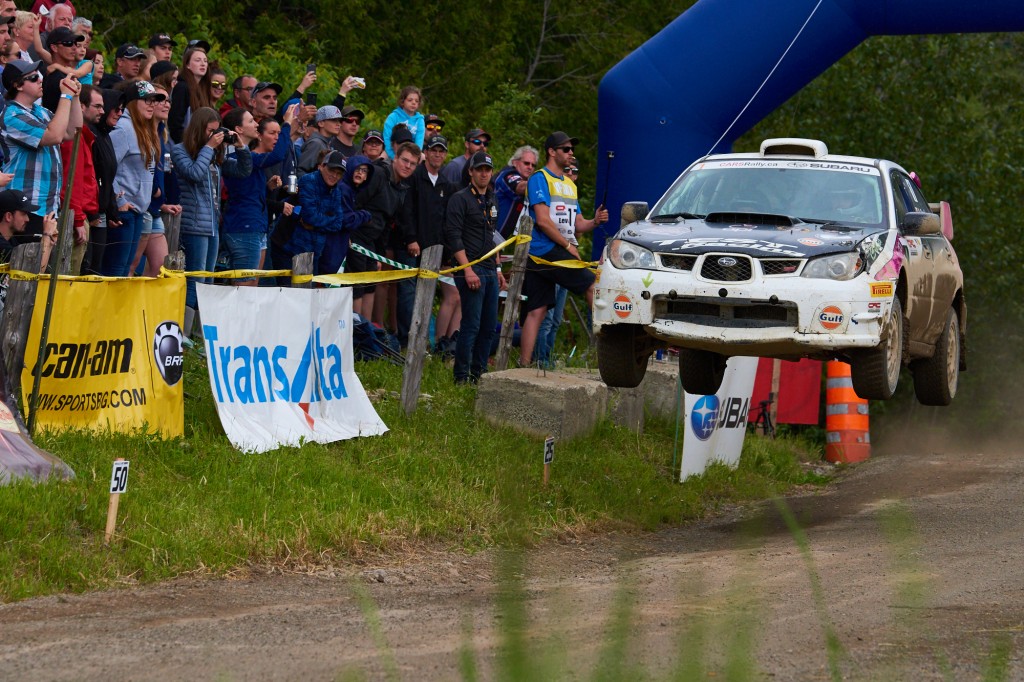 TEST Racing’s Karel Carré and Samuel Joyal drove through an assortment of problems to arrive in second place at the end of two days of competition. While nearly every team faced mechanical problems during the event, the pair were able to continue despite suspension problems and a leaking battery that all had an impact on the first day.

“We had to be careful today,” said Karel. “The car has been very good, but we have some older parts that we have to think about. We didn’t have to push much today because our position was secure.”

Carré and Joyal are defending Canadian Champions but are undecided how the rest of this season take shape, opting to run events in the east before deciding whether to head west. 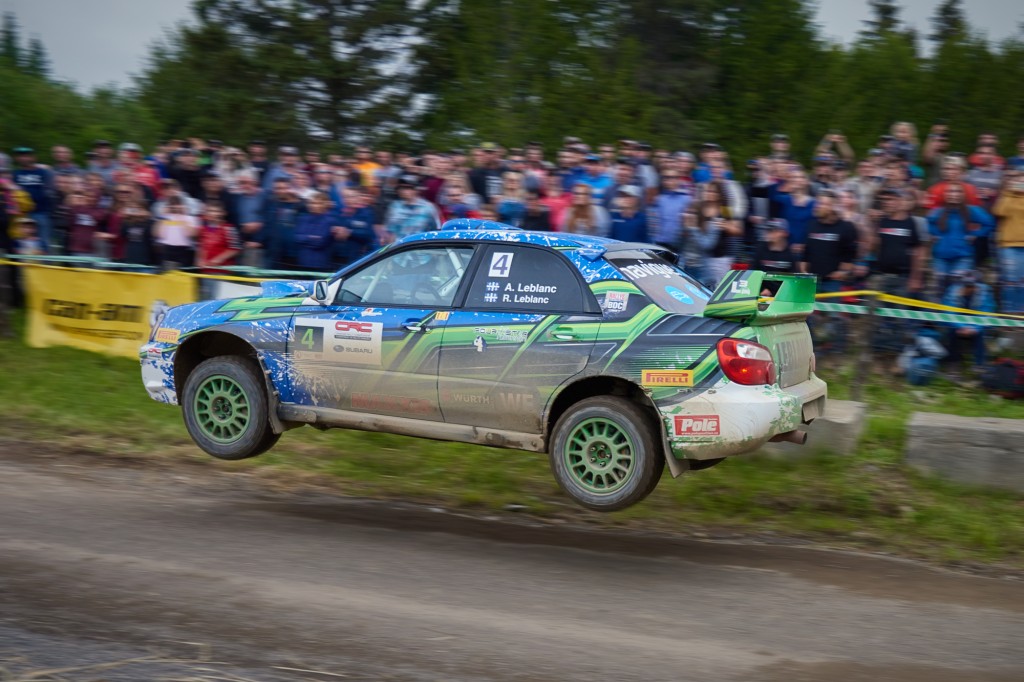 On the tenth anniversary of their first rally, Andre and Rene Leblanc faced a considerable challenge when second gear in their transmission gave out on the first loop of stages on Day One. The team arrived at each service break, drained the fluid from the gearbox and topped it up with fresh gear oil. Miraculously, the transmission survived the entire rally bringing the local team home in third place.

“We are very happy to get to the podium this weekend, it’s a special weekend for us with the anniversary and the trouble we had,” said Andre Leblanc. “There were times where the road was more technical where it was a problem to not have second gear, but we were able to drive around the problem and help the car survive to the end.” 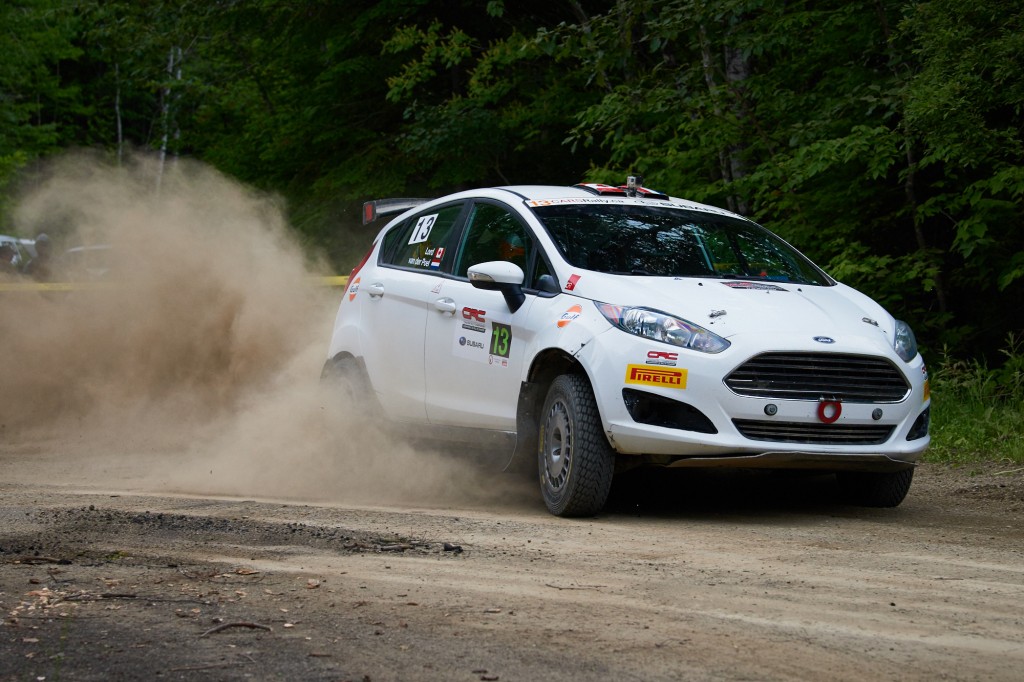 The 2WD field experienced an array of issues that blew apart the race on the first day, but teams persevered to arrive at the finish despite restart penalties. The fastest team to avoid major problems were Wim van der Poel and Bryan Lord, who came out on top of the class standings, finishing eighth overall.

“We had a good rally in terms of our car and our performance, but we had no fun,” said van der Poel. “We love having competition, and the conditions took a toll on our rivals. It was sad to see Mathieu Leblanc and Eric Dubé have problems, and for Jason Bailey and Shayne Peterson to retire from the event.

“We picked a target in the open class cars and went out to beat them.” 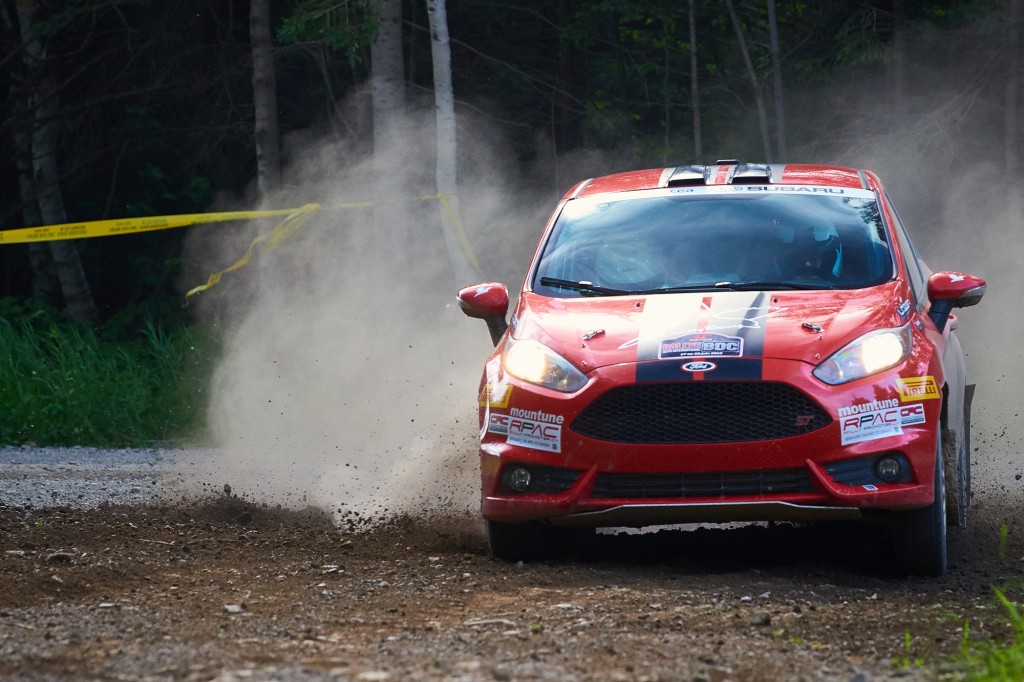 The team moved as high as sixth through the event, until a few Open class teams made a late push, climbing back up the standings.

Leblanc and Dubé recovered from Day One troubles to finish second in class ahead of Leblanc and Cavanaugh in third.

A nod also to Yves Boudreau and Danny Hudon who put in a consistent drive in their Production 4WD Subaru to finish sixth overall amidst a host of more powerful Open Class cars.

The championship lead now goes to Levac, who adds this victory to a second place at the Rocky Mountain Rally in May. He’s ahead of Carré, who holds two second place finishes this season.

The Canadian Rally Championship continues at Rallye Défi, in Montpellier, Quebec, in September. 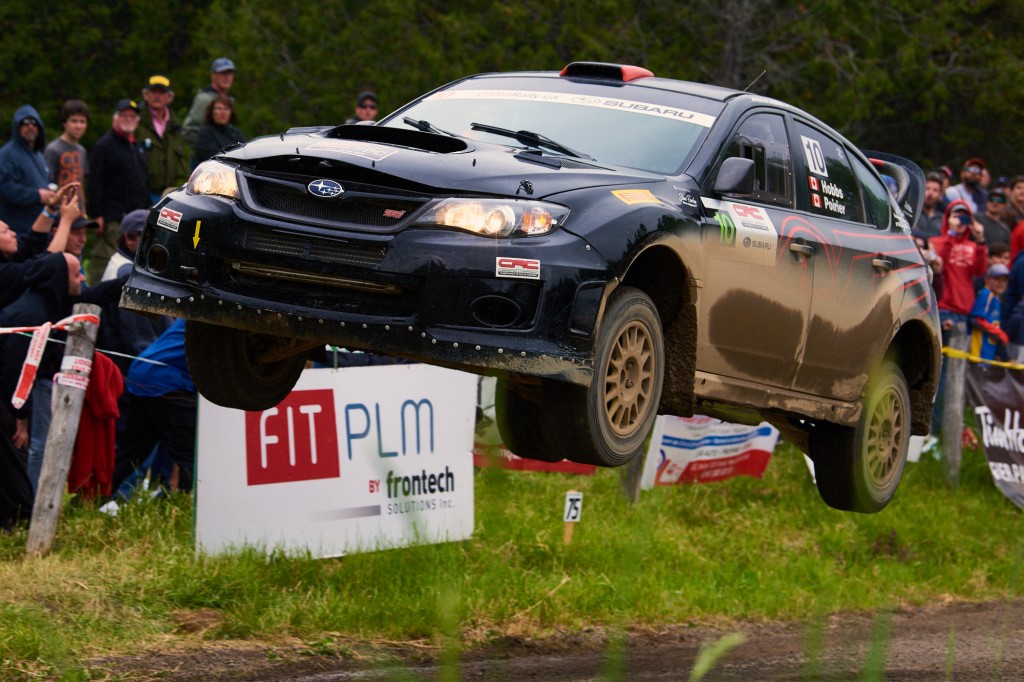 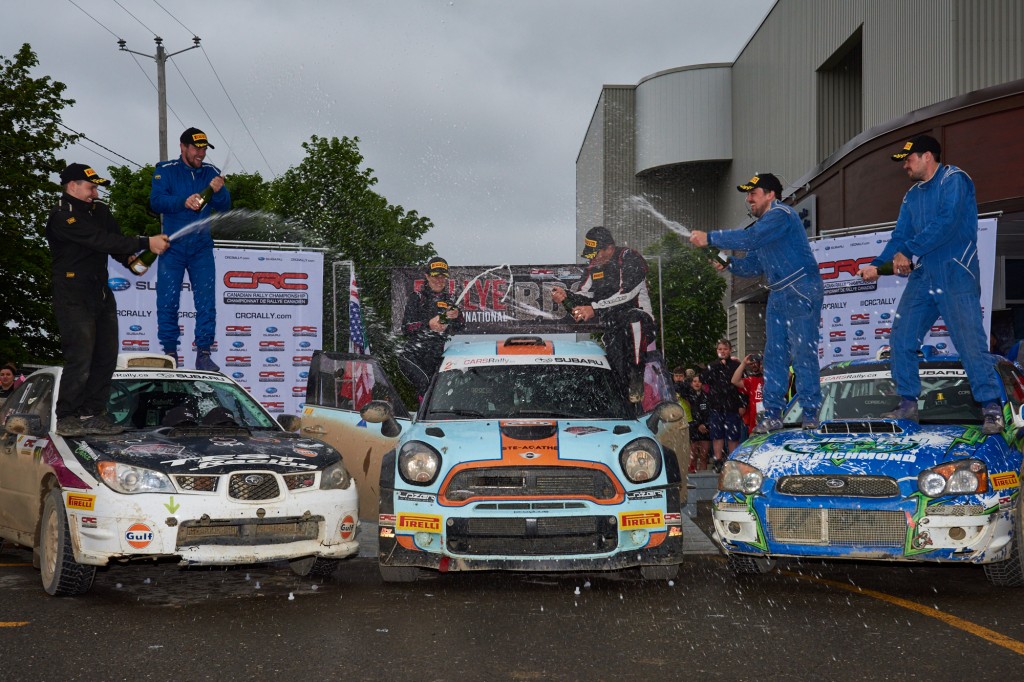 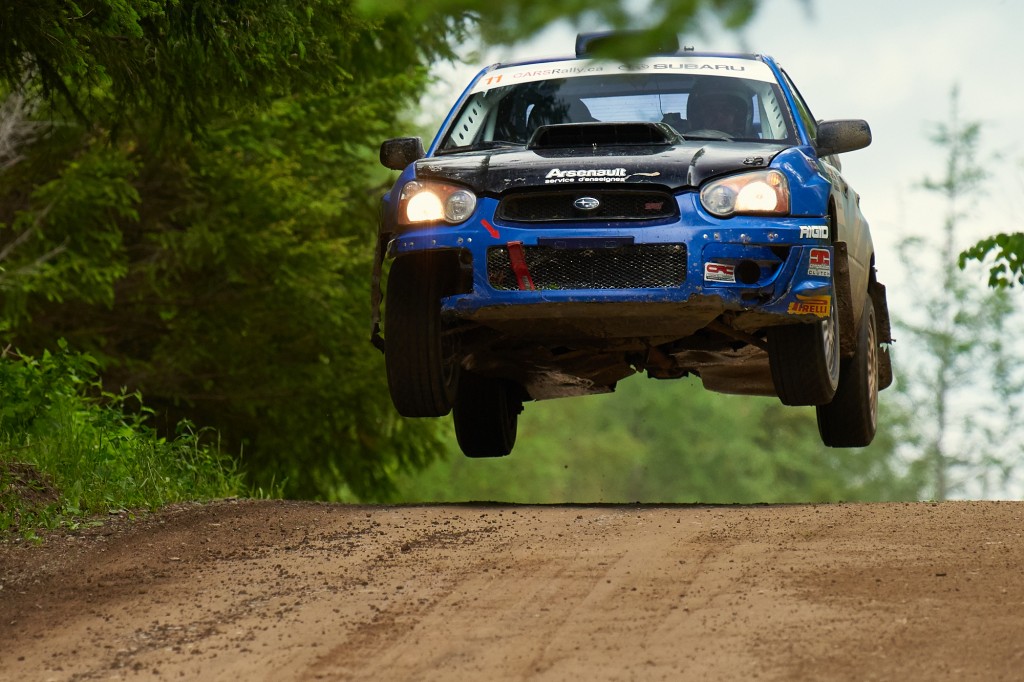