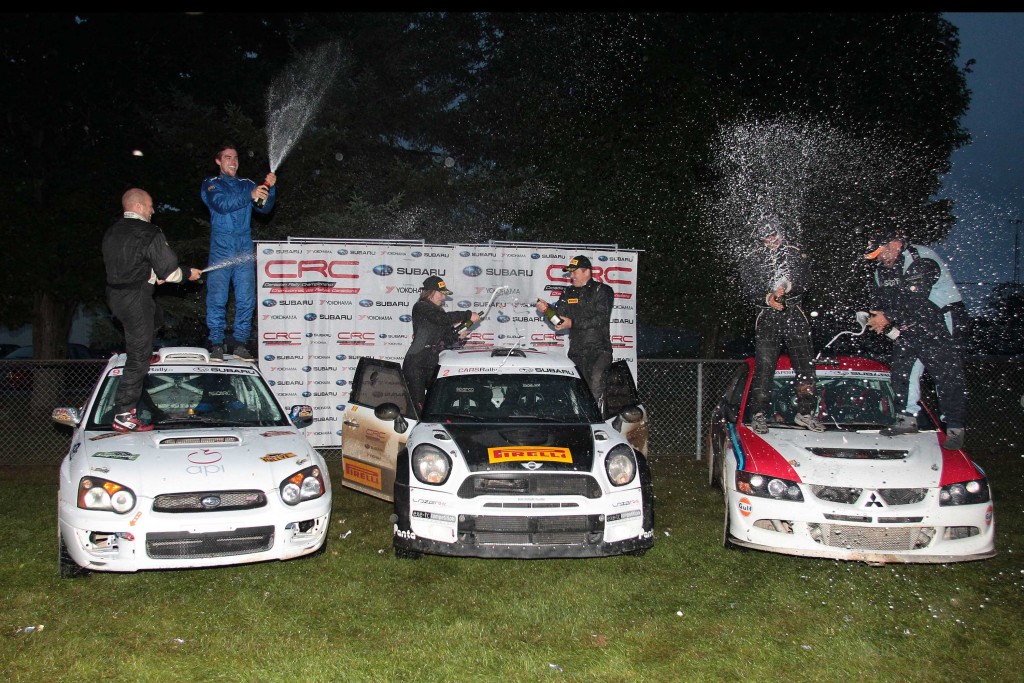 Sainte-Agathe-des-Monts, Que., September 13, 2015 – Joël Levac and Stéphanie Lewis of Montreal marked a new high point in their rally career by winning the Rallye Défi, their first-ever victory at a round of the Canadian Rally Championship. Driving a former World Rally Championship MINI, the pair attacked on the first day of the rally, and then slowed on day two when rain contributed to slippery conditions.

“For us, this has been a perfect weekend,” said Levac. “We stuck to the plan of trying to increase our pace from last year, and the result at the end is magical. I want to thank all the people who have helped me on this adventure. It takes so much time and dedication so to win our first event is an amazing feeling.”

During the first day of competition, the team were able to match the times of the eight-time Rallye Défi winner Antoine L’Estage (St-Jean-sur-Richelieu, Que) and Alan Ockwell (Toronto), of Subaru Rally Team Canada. When conditions became challenging in the rain, L’Estage and Ockwell pressed hard to build a lead until fuel problems forced the team to retire, handing the lead over to Levac and Lewis.

“It’s my second year in rally, so I am getting used to the car and pacenotes and my competitors,” said Carré. “We had a great fight, and Besner has always been a great sportsman, so it is a lot of fun to battle on the stages.”

Besner and Joyal struggled with minor car problems through the event, and despite the pair’s best efforts, they slipped back to third place overall. Besner last finished on the Rallye Défi podium when he won the event in 2001.

“I never take a position for granted when Karel is around,” said Besner, who is also leading a road racing championship. “It’s really nice to be on the podium for the first time since my return to rallying a few years ago, but I would have liked to beat Karel.”

The team of Nicolas Laverdiére (Laval, Que) and Jean-Mathieu Tremblay (Montreal, Que) were consistent in their two-wheel drive Honda, to finish in eighth place. Although the team faced suspension problems on the rough roads used to open the event, they were able to make repairs without having lost a lot of time.

The Rallye Défi marks the start of the fall rally season in Canada. Held on roads that snake through the scenic Laurentian mountains surrounding Sainte-Agathe-des-Monts, the event takes place over two days and consists of more than 175kms of competitive sections. As often happens, conditions for the first day were hot and sunny with dust trails kicked up behind each rally car. Overnight, a storm system moved in and rain turned the gravel roads into slick surfaces that caught out many experienced teams.

Rally car racing is often described simply as “real cars, real roads, real fast.” The all-season motorsport sees drivers and their co-drivers take modified road cars to the limit as they achieve blistering speeds over closed-road courses that typically cover more than 150 kilometers of gravel, dirt or snow-covered roads. Fans can get up close to the cars in the service areas and catch all the action from  designated spectator points located at the best spots on the route.