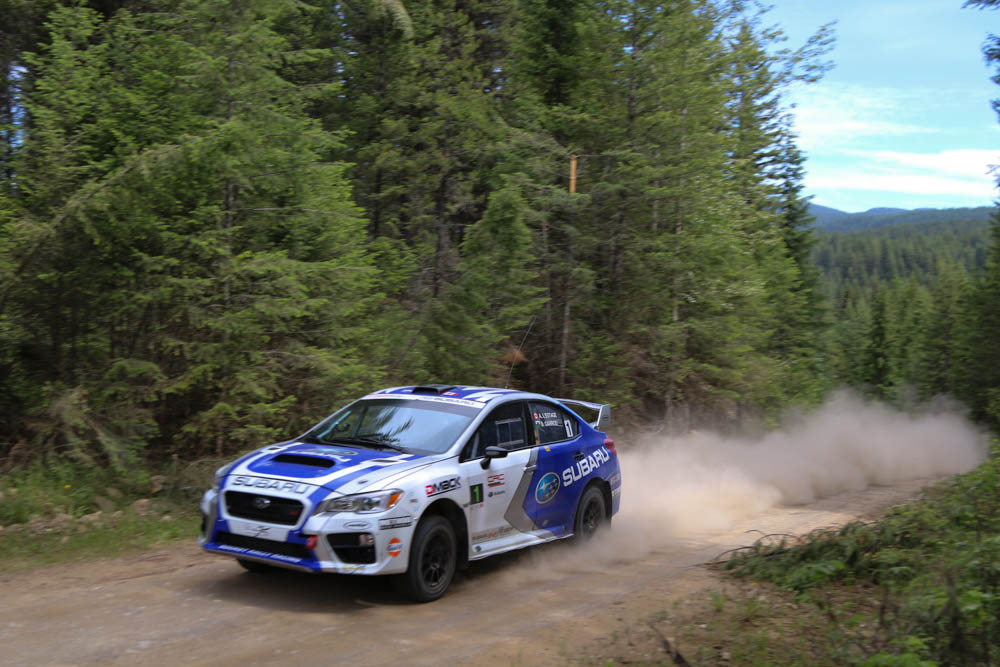 Antoine L’Estage and Darren Garrod of the Subaru Rally Team Canada are leading the 2016 Rocky Mountain Rally after the first three stages on day one. The team has been having to push extremely hard to hold off the attack of Joel Levac and Stephanie Lewis, and lead the event by a margin of 15 seconds.

“We pushed really hard on the first stage, and I thought we had a good time, but then Joel and Stephanie were less than a second behind us,” said L’Estage at the day’s only service. “So we went back out and drove really hard, took some big chances. We’re making a bigger margin, but we are really pushing so hard.” 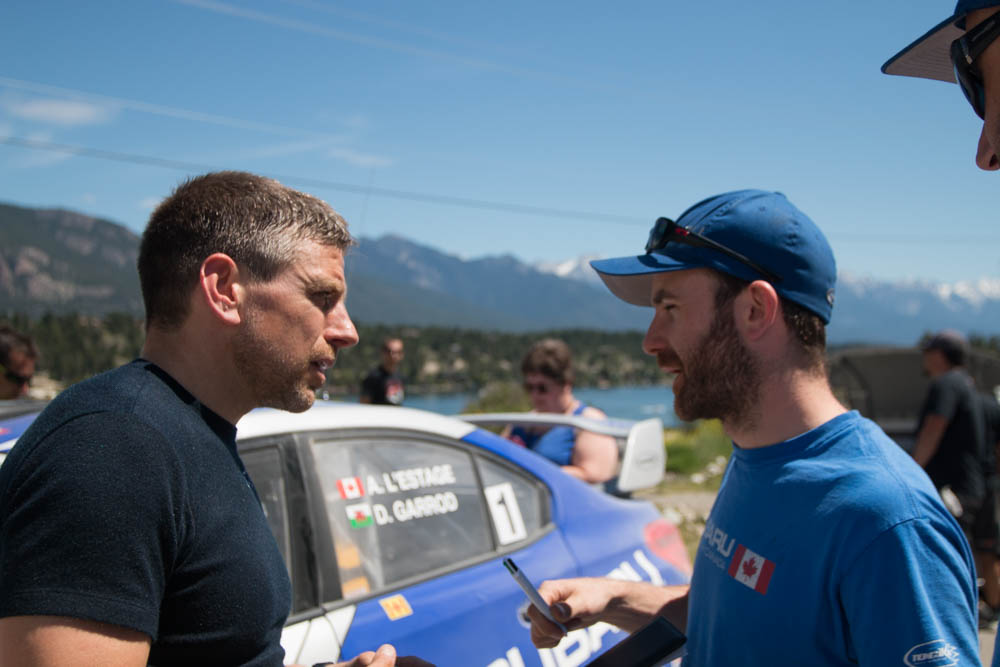 Levac and Lewis are one of three Quebec-based teams that opted to come west for the event, each in the hunt for championship points. In their WRC-spec MINI, the team has been exceptionally fast and one of the strongest challenges to L’Estage’s long-standing dominance in the Canadian Rally Championship.

“We were having a good drive,” said Lewis. “But this is our first time on these roads. Our notes are good, but they are not as good as those notes we have for Quebec rallies.” 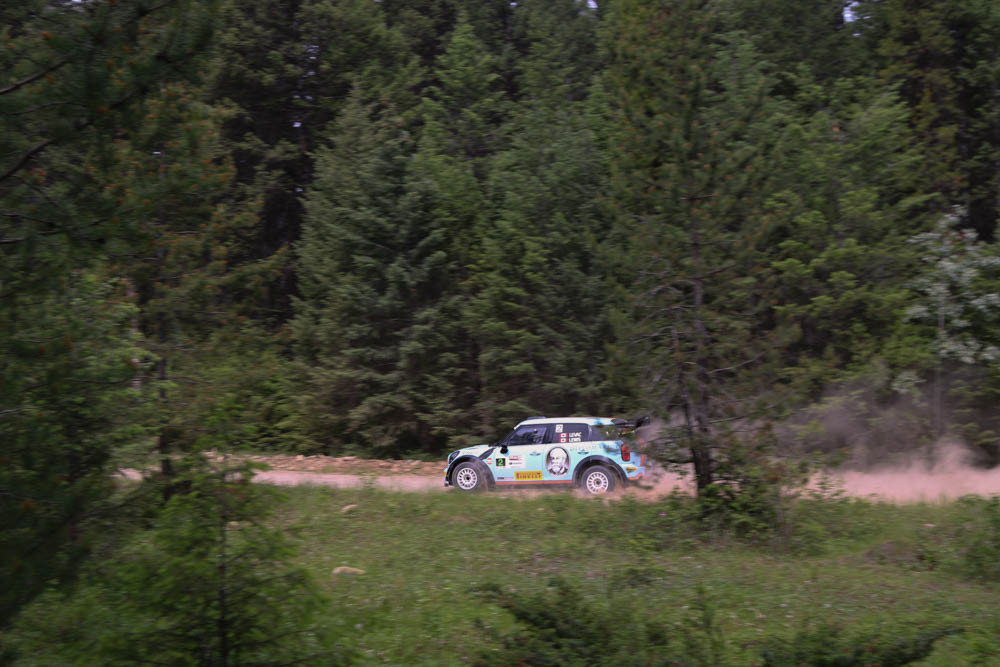 Despite this difficulty, the pair made up well over a minute on the third stage when compared to Alex Beland and Lyne Murphy, losing visibility in Beland’s dust. The huge difference in pace is largely explained by problems with Beland’s car.

“There’s something wrong with the engine, it doesn’t sound good,” said Beland. “We also lost fourth gear, and fifth gear is really bad, so it’s a big problem on these fast stages.” 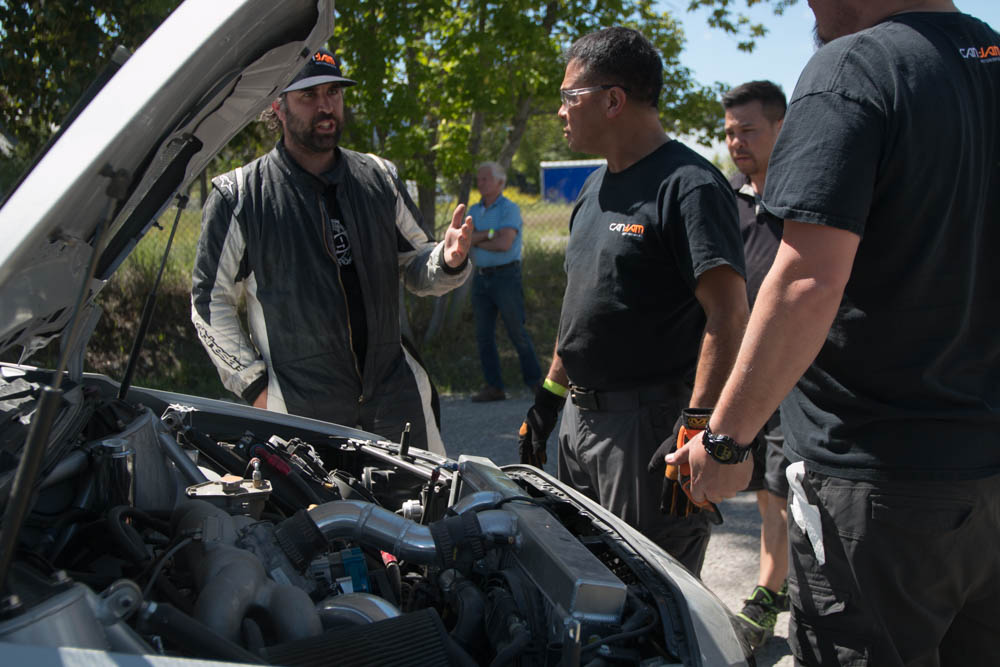 The Can Jam team changed the transmission, and a coil pack – the culprit for the engine problems – and got the team back out on the road. Boris Djordjevic and Robin Chapelsky have moved into third place after three stages, and sit over a minute back of Levac and Lewis.

Maxime Labrie and Anick Barrette arrived at the Rocky Mountain Rally as championship leaders, having won the opening round of the season, the Rallye Perce Neige. The pair are holding fourth place after the first three stages, and have set the priority to stay in the top five to be able to have an extra dust minute provided to the five fastest teams. Rounding out the top five so far is Hardy Schmidtke and John Dillon. 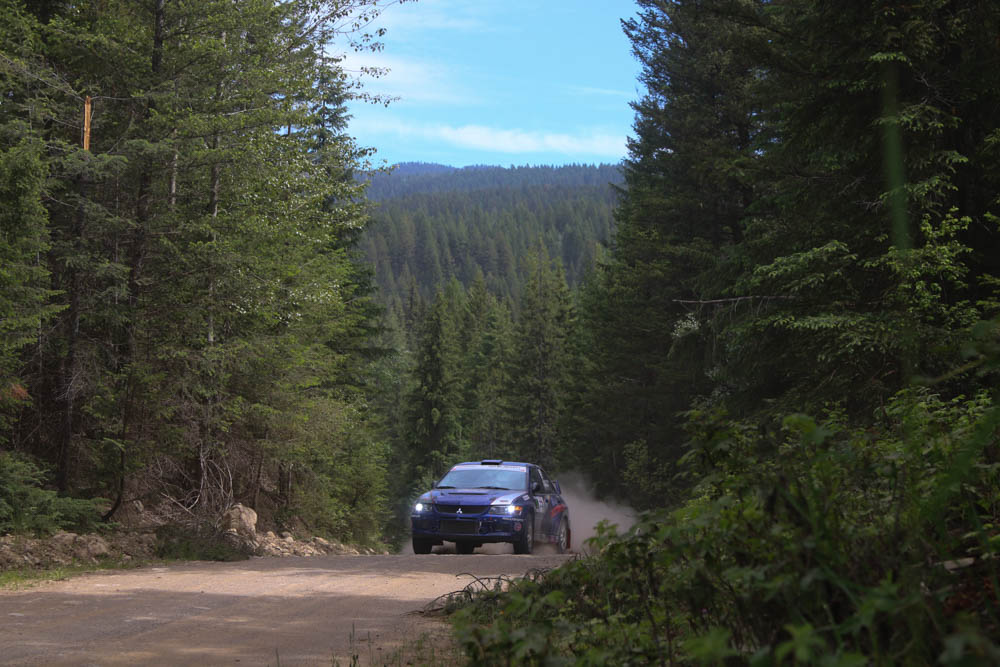 Brandon Semenuk and John Hall are a close sixth, just four seconds out of the top five. The pair had a harrowing third stage after brake problems developed the previous stage led to complete brake failure by the midpoint of stage three.

“It was all fast stretches followed by tight corners, going downhill,” said Semenuk. In service, the team discovered a rear caliper had split open, allowing brake fluid to drain out of the system. “It was exactly the worst type of road to drive with no brakes. There was some aggressive shifting to keep things under control.” 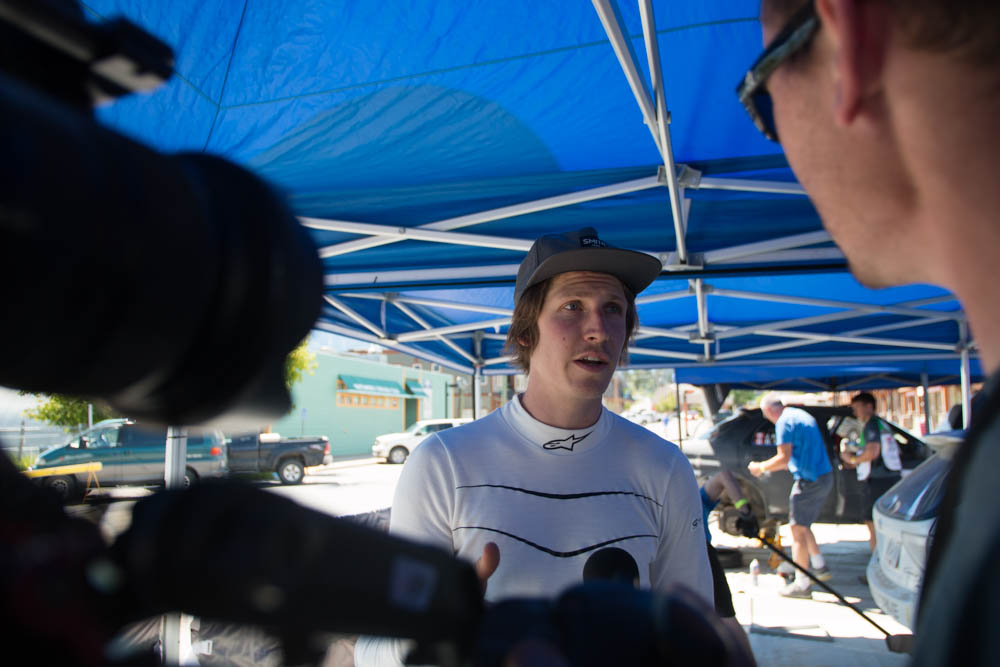 The two-wheel-drive, the usual contenders lined up at the start ready to once again do battle against familiar rivals. However, the lead in class was taken by the brothers Jan and Jody Zedril. The pair dominated the Canadian two-wheel-drive class from 2009 to 2011 before taking some time off to rebuild the car before returning to competition. After running a few events over the last two years, the pair are back on Canadian roads and clearly setting a good pace.

“We’ve had a good morning and are getting back into the rhythm,” said Jody. “I know Dave Clark has had a few problems, so I am sure once those get fixed, we’ll really have to pick up our pace.” 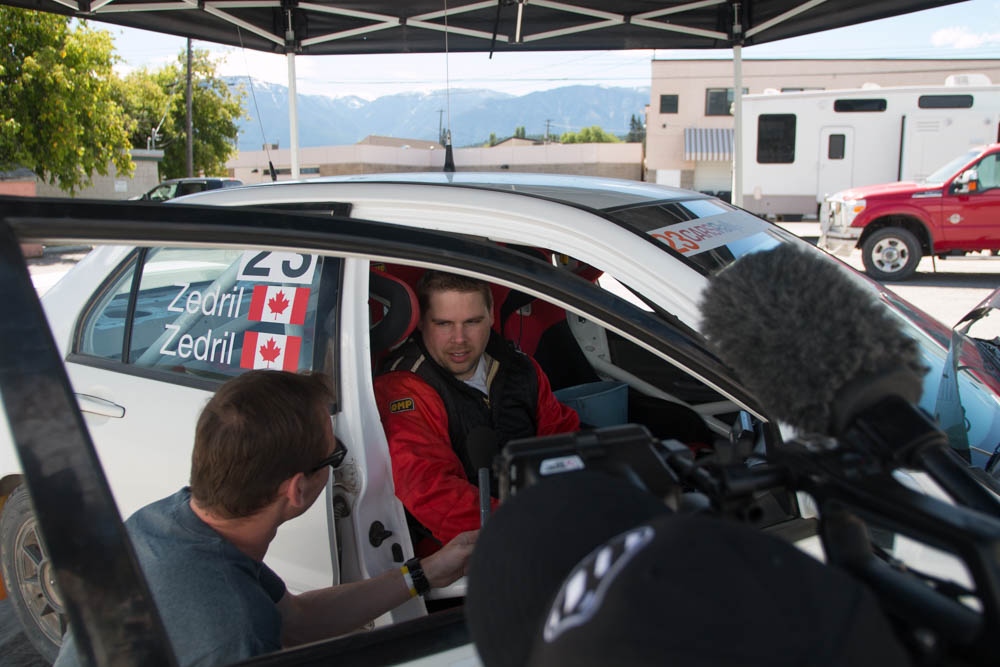 Dave Clark and Jen Daly struggled to contend with boost and overheating problems through the first few stages and haven’t been able to go as fast as the pair typically run. They are 23 seconds back of the Zedrils. 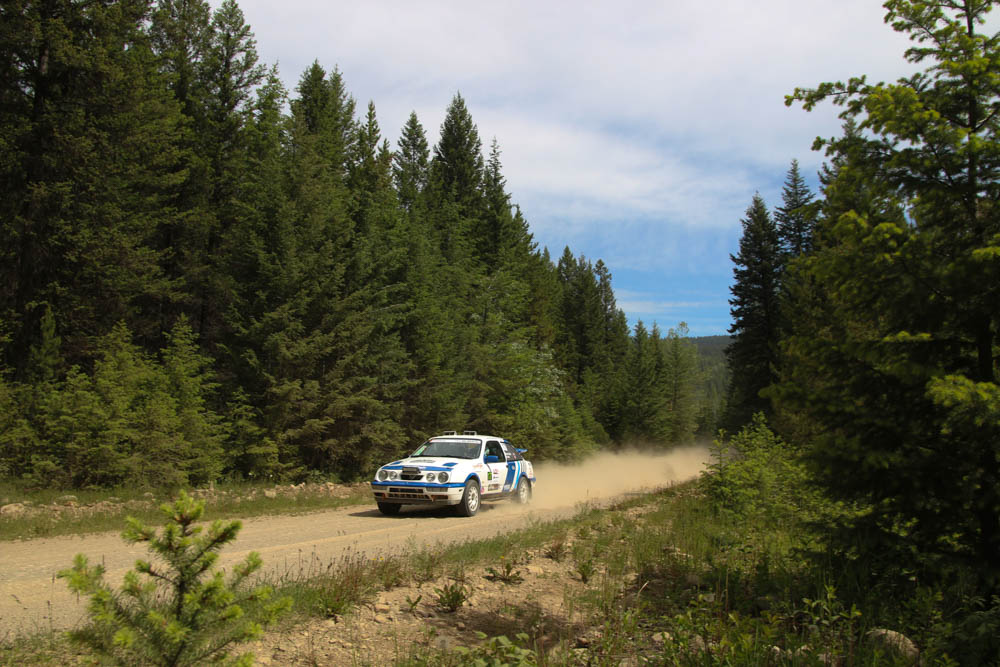 Graham Bruce and Martin Burnley came into service as third fastest in class, but after assessing an oil leak, the pair have retired and will aim to restart tomorrow. Tanveer Deen and Michael Szewczyk crashed out early on stage one, and are also aiming to restart in the morning.

Voyteck Stywryszko and Peter Brook have inherited third in class, but sit nearly two minutes back of the class leaders.

Dry conditions in the region have led to dust hanging in the air, though the visibility has only been a problem for a few teams. Requests to add an extra minute have been declined for the time being, though organizers will monitor the issue as the day continues. 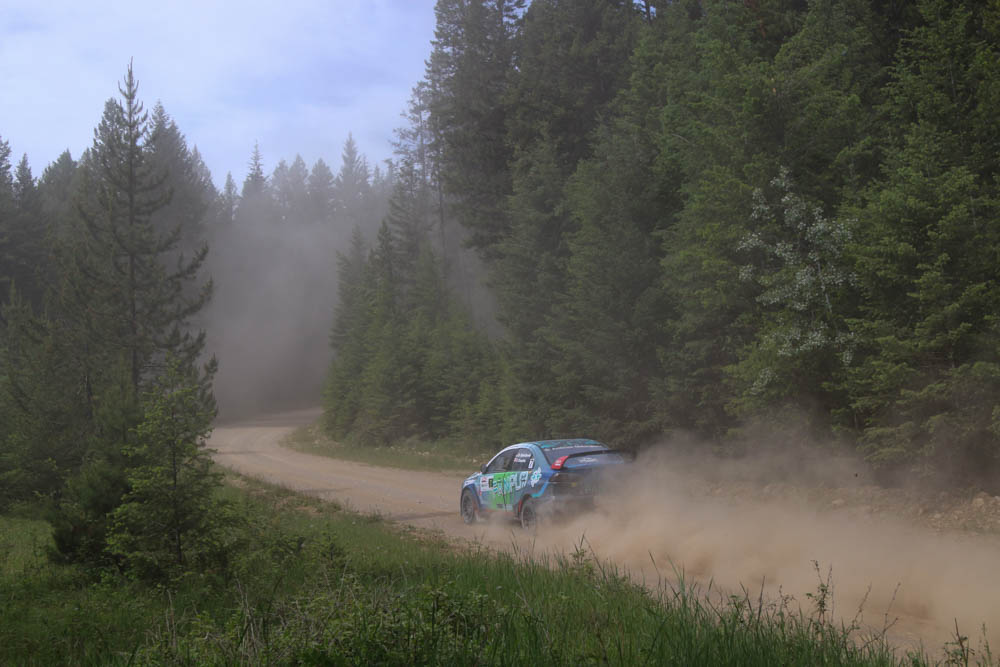 The afternoon stages continue in the same complex of roads in the morning stages. Four more stages round out the day with seven specials. The rally continues tomorrow with four passes of the scenic but demanding Hawke stages. 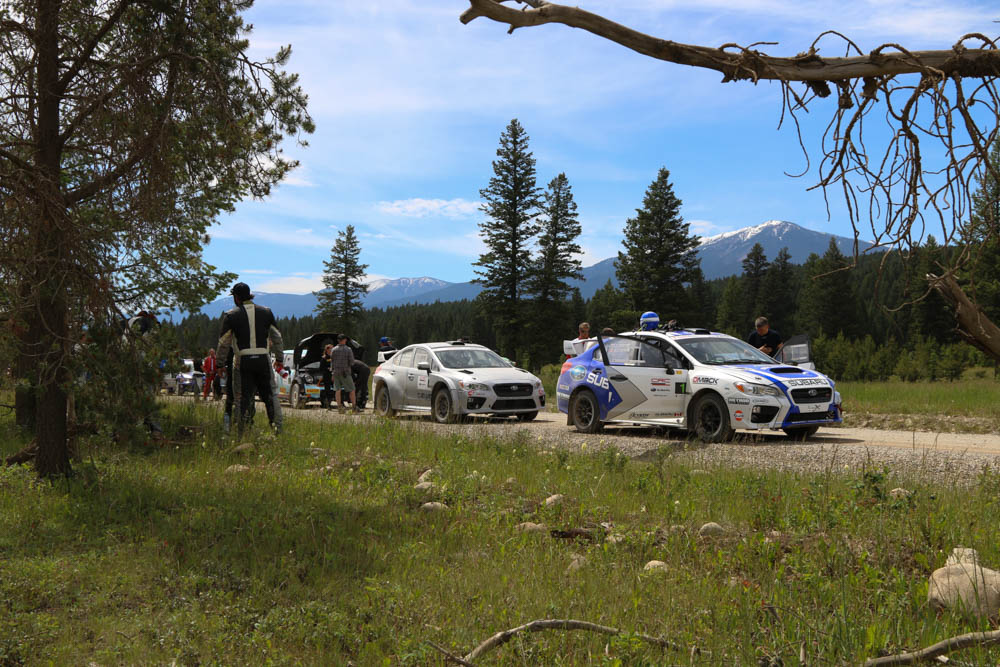