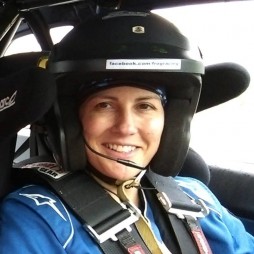 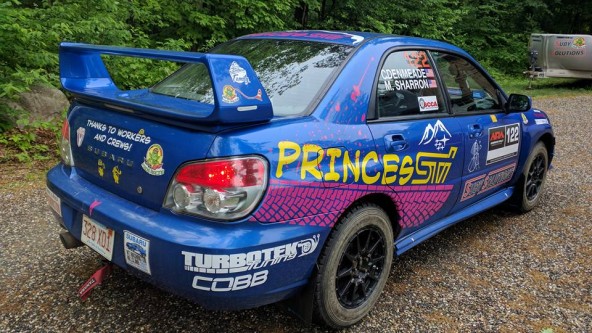 I drive the PrincesSTI and my husband drives the FrogSTIr (princess and frog theme).

Frog racing started out as a love story. I met my husband in Europe and he moved here to the United States. He was ma grenouille, my frog. Thus, the name frog racing became our team. I started racing in 2015 at the age of 45 with RallyX and then moved onto rally sprints and then stage rally in which I competed in the 2016 Black River Stages, the 2016 Empire State Performance Rally, Rallye Defi in 2017, Perce Neige in 2017, 2018 and 2020; Susquehannock Trail Performance Rally and the New England Forest Rally in 2018 and 2019. I competed at Lanark Highland Forest Rally coming in 7th overall in 2019, and Rally of the Tall Pines coming in 5th in Regionals and 2nd in class. I also compete in wheel to wheel ice racing with AMEC. I have been hillclimbing for 6 years with the New England Hillclimb Association (NEHA) and BROKE THE RECORD for the fastest female ever up Mt Washington at the 2021 Climb to the Clouds Hillclimb. I came in 3rd place overall in L4WD class for the ARA Eastern Division Championship in 2018. I am a little slow compared to others overall, but its a shit ton of fun!

The Rallye de Charlevoix was contested this past weekend as the fourth of six events...
Leblanc Wins Rocky Mountain Rally...

A dramatic final-stage shakeup at Rocky Mountain Rally saw the leaders drop off the top...
First Victory for Mailloux and...

Held this past weekend in and around Montpellier, in Quebec’s Outaouais region, the 2021 edition...
LEVAC DOMINATES CANADIAN RALLY RETURN...

The Canadian Rally Championship returned to action again this past weekend in New Richmond, Quebec...

The Rallye de Charlevoix was contested this past weekend as the fourth of six events in the 2021 Canadian Rally Championship, presented by Subaru....
Leblanc Wins Rocky Mountain Rally after Final Stage Drama

A dramatic final-stage shakeup at Rocky Mountain Rally saw the leaders drop off the top step, promoting André and René Leblanc to the event...